It was Mission Number 9 for Blue Origin last month, as the space tourism company founded by Amazon.com CEO Jeff Bezos blasted its New Shepard rocket into a ninth successful suborbital test flight on July 18. In contrast to earlier missions (when the secretive company often waited to make sure everything went right before revealing the mission had happened), Blue Origin pre-announced this one, and streamed it live on the internet -- showing confidence that the kinks have been mostly worked by this point.

That confidence was not misplaced. 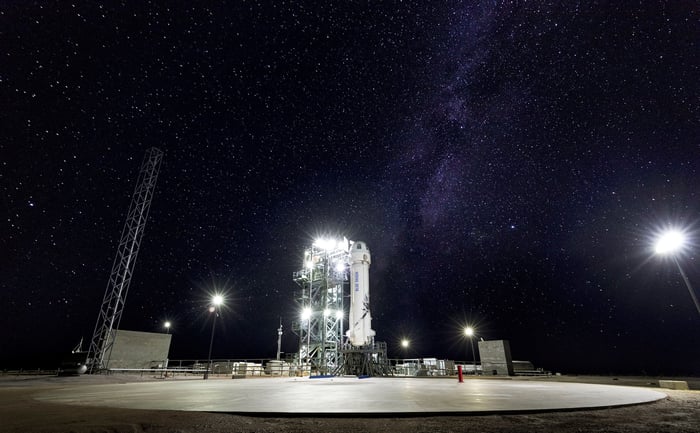 New Shepard's launch and booster detachment went swimmingly, as did its testing of a high-altitude passenger capsule ejection system -- and the eventual powered landing of the booster, and parachute landing of the capsule back on Earth as well. It was about as close to a 100% perfect demonstration of the company's space tourism system as anyone could ask for. As a result, Blue Origin can now not only send paying customers to the edge of space, but also "guarantee that we can safely return our astronauts in any phase of flight."

Speaking of space, New Shepard's capsule set a new record for altitude, reaching 389,846 feet (73.8 miles), or roughly a dozen miles past the 62-mile-up Karman line  usually taken to designate the point at which Earth ends and space begins.

As Blue Origin inches ever closer (gradatim ferociter) to the day it begins conducting commercial trips to space for paying customers, this number could prove important. Many companies are working on sending satellites large and small into orbit, but right now, only two companies -- Blue Origin and Sir Richard Branson's Virgin Galactic -- have progressed to the point when they can send civilians into space on sightseeing trips in the very near future.

Blue Origin's altitude record means it is already technically capable of achieving this feat. But what about Virgin Galactic?

Race to (the edge of) space

As it turns out, Richard Branson's baby made news last month as well. On Thursday , July 26, Virgin Galactic's VMS Eve mothership took off from Mojave Air and Space Port in California, climbed to an altitude of 46,500 feet, and there released the VSS Unity rocketship. Unity, in turn, ignited its engine and proceeded to blast 24 miles straight up -- topping out at an altitude of 170,800 feet (32.3 miles).

This was Virgin Galactic's third successful powered flight since the 2014 crash of its SpaceShipTwo prototype. It was also the first time anyone had sent humans, not employed by a government space program, into Earth's mesosphere (the layer of our atmosphere that lies between the stratosphere below and the thermosphere above).

Admittedly, Virgin Galactic hasn't made it past the Karman line yet. But last week it got a helping hand from a new study published in Acta Astronautica, a publication of the International Academy of Astronautics. There, astrophysicist Jonathan McDowell argued that atmospheric aerodynamics actually cease to affect spaceships at a much lower altitude than assumed by the Karman line, and that the definition of "edge of space" should therefore be reset to 49.6 miles. If this argument gains acceptance, it would benefit both Blue Origin and Virgin Galactic (but especially the latter) by effectively moving the border of "space" 12 miles closer to Earth, thus making it easier to reach -- and easier to market to tourists.

I think I know which way Virgin Galactic's marketing team is hoping the decision will go.

In short, it was a big month for space investors. Blue Origin was first to set a new altitude record for launching a mannequin to space. Virgin Galactic then became first to send civilian pilots to the mesosphere. Kudos are due all around.

And yet, for investors, here's the important point: Not only did Blue Origin exceed Virgin Galactic's altitude by more than twice. Blue Origin also proved it's capable of sending passengers to literal space -- in fact, 12 miles into space. In contrast, even at its highest height to date, Virgin Galactic still remains nearly 30 miles short of crossing the Karman line.

This could pose a marketing problem for Virgin Galactic when it comes time to set final prices for "space" tourism trips -- and/or attract investors to an IPO offering (as Virgin Galactic has intimated it intends to do -- eventually ). Unless it can improve its performance, though (or unless the Karman line moves a lot closer), Virgin Galactic won't really be sending its customers to space, while Blue Origin clearly will.

This almost certainly gives Blue Origin an edge both in ease of attracting customers (i.e. revenue streams) and in its ability to charge those customers higher prices (pricing power, which leads to higher profit margins on revenues). Come the day that Blue Origin, too, begins thinking about an IPO, the company's ability to reach higher altitudes and truly put its customers in "space" would also make Blue Origin the more valuable company in the event of an IPO.