The dairy and beverage giant cut its expectations for the rest of 2018, as it continues to cut costs in a tough environment.

Shares of dairy-foods giant Dean Foods Co. (DF) were down 13.3% at 12:11 p.m. EDT on Aug. 7, following the release of its second-quarter earnings results before market open. While the company's revenue result of $1.91 billion and its adjusted (non-GAAP) earnings of $0.16 per share were right in line with Wall Street's expectations, the market was not pleased with the lower guidance management made for the rest of the year.

At the beginning of the year, Dean Foods set full-year guidance for adjusted earnings of $0.55 to $0.80 per share, and said it would generate $30 million to $50 million in free cash flow, while spending $135 million to $160 million on capital expenditures. Then in early May, management maintained the same full-year expectations in its first-quarter release, when it also delivered results that came in ahead of investors' expectations. That sent shares up as much as 15% on the day. 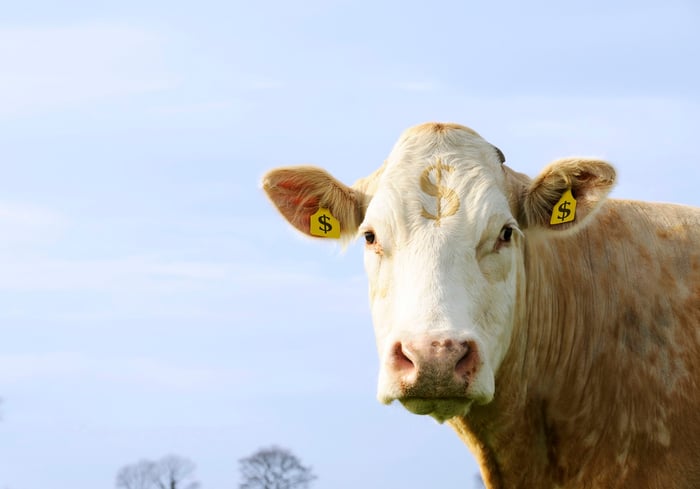 Fast-forward from May to today, and now Dean Foods' management has lowered the expectations considerably, with adjusted earnings guidance cut to $0.32 to $0.52 per share. The company does expect to generate slightly higher free cash flow of $40 million to $60 million, but not from increased operating cash flow. The $10 million bump is entirely related to a $10 million lowering in planned capital expenditures, to a new range of $125 million to $150 million.

The dairy industry -- really the entire packaged foods business -- has been a tough place to invest over the past year and change, and that could remain the case for Dean Foods for the foreseeable future. The company is in the midst of a pretty major restructuring effort aimed at cutting costs by $150 million annually, and its long-term prospects are heavily dependent on pulling off those efforts.

But at the same time, the company's move to cut capital expenditures to prop up its free cash flow should be watched closely. There's little doubt that the biggest reason behind the move was to make sure the company's dividend is secure, and by cutting capex the near-term safety of the payout is assured. But skimping on capex can backfire over the long term, since it can often result in the need to spend even more than the initial savings.

As things stand today, today's 13% beatdown may be a bit overdone, but I don't think it makes Dean Foods a buy today. The company has $857 million in debt (though that is down $56 million since the beginning of the year) versus $25.4 million in cash, and even its adjusted cash flow and operating results have worsened over the past year.

Furthermore, it's not clear that the current price is really a decent value, with shares trading at a very broad range between 16 and 26 times the company's full-year adjusted earnings guidance. Honestly, a struggling dairy producer in the midst of a major turnaround probably isn't worth 26 times earnings.

The dividend is attractive, with yield over 4%. I expect management to continue taking steps to keep the payout secure, but potentially at the risk of harming the company's long-term earnings by deferring necessary spending.

Put it all together, and investors need to decide whether the risk is worth the reward. This early in the company's restructuring efforts, I'd suggest a wait-and-see approach.