Please ensure Javascript is enabled for purposes of website accessibility
Free Article Join Over 1 Million Premium Members And Get More In-Depth Stock Guidance and Research
By John Bromels - Sep 10, 2018 at 8:34AM

Tesla's stock performance has crushed GM's in recent years. But can it keep that up?

While there weren't any car company stocks in ancient Greece (or any stocks at all, for that matter), Aesop's fable about the slow-and-steady tortoise beating the speedy hare could very well be about automakers General Motors ( GM -2.15% ) and Tesla ( TSLA -6.42% ).

But in this contemporary version of the matchup, will the hare prevail? After all, Tesla's share price has skyrocketed over the last five years, while GM's has remained roughly flat. Let's look at these companies to see which is the better buy right now. 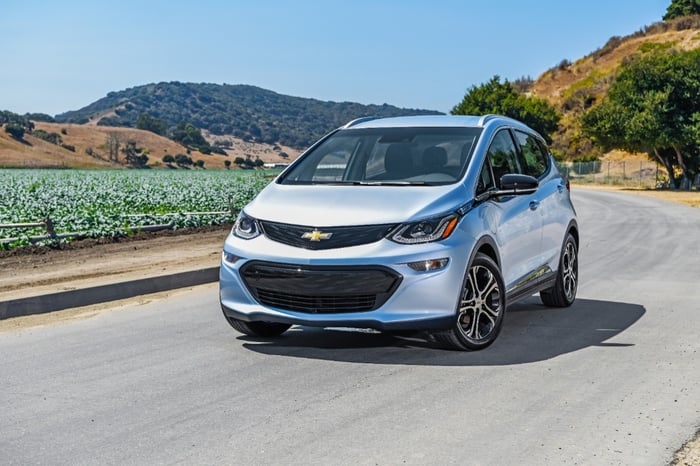 Tesla and GM look about as different as a hare and a tortoise.

GM sells a lot of vehicles: about 10 million per year for the past three years. The global auto industry is booming, with sales topping 90 million in 2017 for the first time in history. That's helped GM, which is beating its U.S. rivals in the crucial Chinese market. Domestically, although sales of its smaller sedans have been flagging, the company is more than making up for it with sales of profitable crossover SUVs and pickup trucks. While GM's overall domestic sales grew 5% in Q2 2018, every single one of its Chevy and GMC SUV and pickup models saw double-digit gains.

All of this has helped to usher in higher profits for GM -- after adjusting for the one-time impacts of tax reform in 2017. And GM is predicting more where that came from. According to GM's chief economist Elaine Buckberg, "[C]onsumer confidence is high and household balance sheets are healthy. All of this plus a strong job market makes consumers more willing to commit to major purchases like vehicles."

A different kind of company

Meanwhile, Tesla -- despite currently having a higher market cap than GM -- hit a milestone last quarter when it successfully managed to churn out an average of 5,000 of the Model 3 per week. That brought its overall potential total of vehicles produced per year -- including the Model S and Model X -- to about 364,000: just a tiny fraction of GM's. Worse, the company is hemorrhaging cash, posting its largest-ever quarterly loss in Q2 2018.

All the vehicles Tesla manufactures are electric, and feature high-tech gadgets like a touchscreen dashboard and the Autopilot driver assistance system. Naturally, with these technologies -- and Tesla's manufacturing systems -- still in their infancy, there are bound to be growing pains as the automaker tries to scale up its production.

But Tesla doesn't have the electric vehicle space all to itself: GM's Chevy Bolt and Nissan's Leaf have both been selling well. And although Tesla's models still claim the top U.S. sales spots for EVs, Bolt demand has actually been outstripping supply in key global markets like the U.S., Canada, and South Korea.In response, GM plans to ramp up Bolt production by 20% by the end of the year.

It's also worth remembering that, thanks to its purchase of SolarCity in 2016, Tesla isn't "just" a car company anymore: it also installs solar panels and Powerwall home batteries. These energy storage and generation sales, though, currently only comprise about 11% of Tesla's overall revenue; Tesla's success in the near- to medium-term is going to hinge on its auto sales. So even though Tesla and GM are two creatures with little basis for comparison, GM clearly seems to have a leg up on its competitor right now. But investors should be more concerned about where each company is heading.

Looking at the fundamentals of the two companies, it's actually slow-and-steady GM that looks primed for success.

Just glance at the classic metrics of revenue, profits, and cash flow from the companies' most recent quarters. GM is crushing its rival, which is not only unprofitable but cash flow negative:

If we look at return metrics like Return on Capital Employed and Return on Invested Capital -- which are a good measure of management's effectiveness -- we see again that GM beats Tesla in every metric: 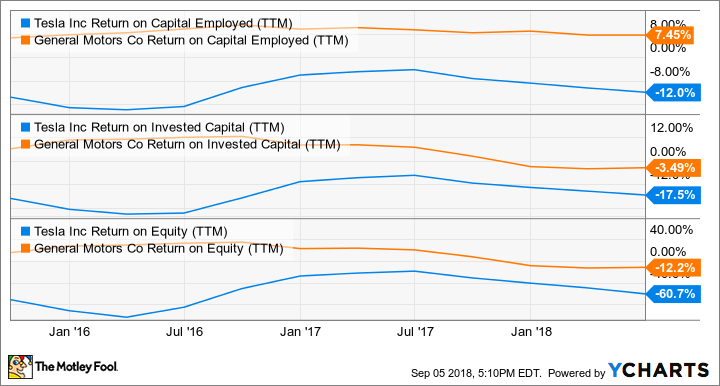 Finally, many standard valuation metrics -- like P/E ratio or Enterprise Value to EBIT -- can't be calculated for Tesla because of its negative earnings. But considering it's being valued at a higher level than GM despite lower sales volumes and poorer fundamentals, GM clearly offers a better value than Tesla, and the companies' price-to-book values reflect this, with Tesla trading at 12.3 times book value compared to GM's 1.4 times book value.

In the race between the hare and the tortoise, nobody could have predicted the tortoise would prevail, but the hare made an unforced error (taking a nap instead of, you know, running the race). Likewise, it's possible an unforeseen twist will emerge that supercharges Tesla's situation or derails GM's. But absent such a development, slow-and-steady GM is clearly the better buy today.

Now, for investors who bought into Tesla when its per-share price was below $100, the hare has probably bested the tortoise: It's unlikely GM is ever going to see the same kinds of massive returns that Tesla did in such a short time frame. But given the challenges facing Tesla, it's unlikely that it's going to see those kinds of returns anytime soon either. Not to mention, a great deal of high expectations for Tesla's future seem to already be priced into the stock.

GM's fundamentals are far better than Tesla's, it has a business model that has proven to be profitable,  and its stock trades at a far more reasonable valuation. Sure enough, slow and steady is winning this race right now. GM looks like the better buy.