The trucking sector has sold off in 2018, but here's why I don't think investors should panic.

Wall Street can be frustrating sometimes, not least because of the seemingly endless debate about when a cyclical industry, such as trucking, is about to hit peak sales. In a sense, it's perfectly understandable -- no one likes buying into a cyclical stock that looks cheap just before its earnings fall and then suddenly its valuation starts to look high. It's equally unpalatable to sell out of a cyclical stock just as sentiment is about to turn.

With that in mind, I happen to think it's not the time to be dumping trucking stocks. Here's why. 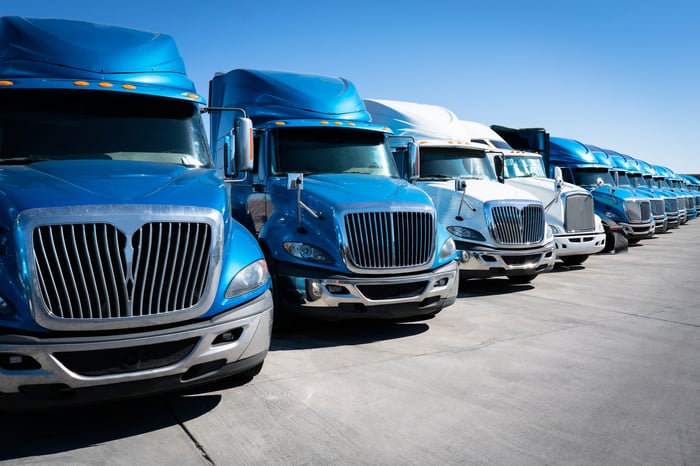 It's been a good year operationally for trucking companies, but it's been a bad year for trucking company stock prices. As you can see below, a basket of stocks with significant trucking exposure shows dramatic underperformance in the last year relative to the 16% gain in the S&P 500 index. 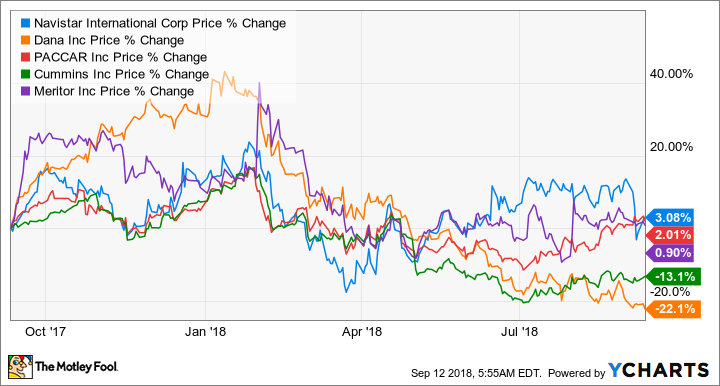 However, if you thought that was a consequence of weakening end markets in 2018, then you would be wrong. All of these companies have actually reported strengthening conditions this year. In fact, the last company to give results, Navistar, beat analyst estimates in its fiscal third quarter and promptly raised its full-year 2018 earnings guidance. Moreover, Navistar raised its estimate for North America heavy-duty truck sales in 2018 to 260,000-280,000 units from a previous estimate of 250,000-280,000 units.

In fact, a look at guidance trends from the leading truck companies shows a progressive increase in estimates -- definitely not something you would expect from an industry in decline. Estimates for truck sales in Europe and Asia (including the important China market) have remained broadly in line throughout 2018, but it's notable that all the companies discussed have increased industry sales estimates for the all-important domestic market.

So if end markets are improving in 2018, why has stock performance been so weak?

Get ready for the peak

Trucking is an industry seen at risk from any potential escalation in so-called tariff and trade wars, but I suspect the real issue overhanging trucking stocks is the fear that sales are about peak. It's not uncommon for increases in current-year sales guidance to be met with the bearish riposte that this only means that sales are going to peak sooner.

As you can see below, truck sales are highly cyclical and investors may be worrying about avoiding the significant slump that occurred in 2016. 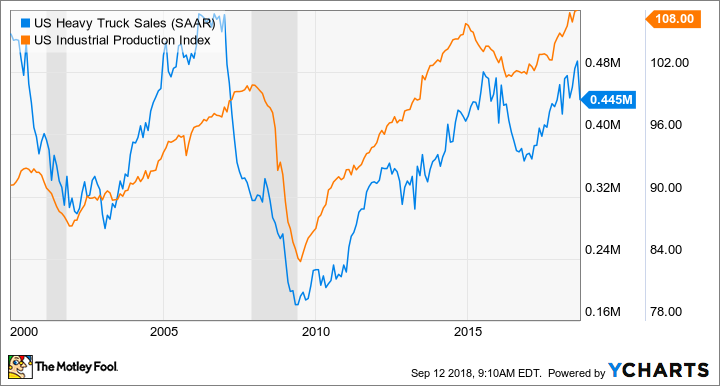 Three reasons why it doesn't matter

Before siding with the bears on the matter, you might want to consider the following three arguments.

First, if you look at the chart above, it's clear that the slowdown in the heavy-truck industry coincided with a recession in U.S. industrial production, but there's no reason to expect industrial conditions to mirror what happened in 2015-2016.

Upon closer inspection, it's clear that the slowdown in 2015-2016 was exacerbated, or perhaps created, by declining energy and mining commodity prices, which had an outsize impact on heavy industries in the U.S. However, oil, metals, and minerals prices have generally been on the uptrend in the last couple of years.

Fear of a peak, not the peak itself

Second, there's evidence to suggest that trucking stocks tend to sell off in anticipation of a peak, and then turn up when it becomes clear that the peak has passed and investors have a better outlook one year out.

Here's how these stocks performed in the year running up to the point when U.S. heavy-truck sales turned down near the beginning of 2016. Does this look similar to what's going on 2018? 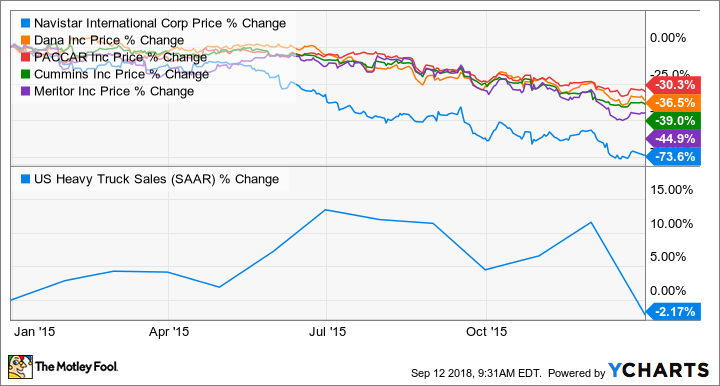 And here's how they performed even as truck sales were in a year-over-year decline throughout 2016. As you can see, it definitely wasn't a good idea to sell out of the stock just before the peak last time around. 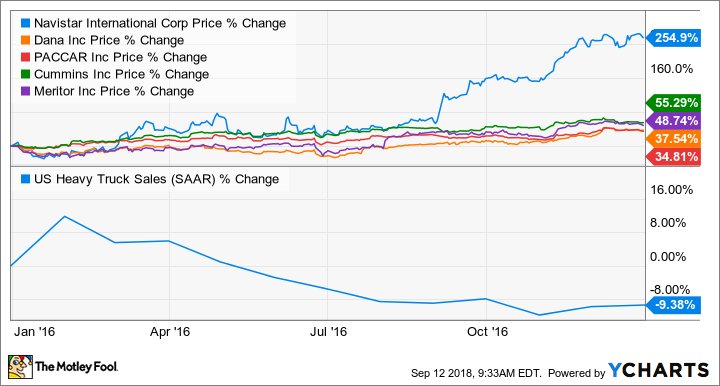 Finally, conditions are now different. During the 2015-2016 slowdown, earnings actually fell for trucking stocks. However, this time around, even as analysts are penciling a slowdown in truck sales and companies like Navistar are predicting it, the consensus is for more earnings growth in the next year -- making valuations look attractive.

To demonstrate this, here's a chart of enterprise value (market cap plus net debt) to earnings before interest, tax, depreciation and amortization (EBITDA) -- a common valuation metric.

As you can see below, the forecasts put all of these companies on forward valuations lower than they were going into 2016 when peak sales occurred (you can see how well these stocks performed during 2016 in the chart above). 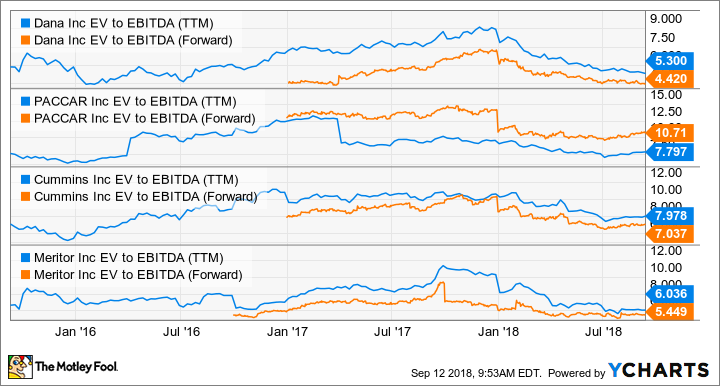 Don't be surprised if trucking stocks come under more pressure in the near term as the debate around peak sales goes on. However, long-term investors should ignore the noise and focus on the long-term prospects of the industry.

The fear of holding stocks in an industry whose sales are about to peak appears to be leading trucking stocks into valuations that seem to be pricing in some sort of multiyear slowdown. If you can ride out the volatility, then, as counterintuitive as it sounds, history suggests holding or even buying the sector when peak sales have clearly passed is a good idea.