Jason Hall, Rich Smith, and Travis Hoium
(TMFVelvetHammer)
Author Bio
Born and raised in the Deep South of Georgia, Jason now calls Southern California home. A Fool since 2006, he began contributing to Fool.com in 2012. Trying to invest better? Like learning about companies with great (or really bad) stories? Jason can usually be found there, cutting through the noise and trying to get to the heart of the story. Follow @TMFVelvetHammer

As a class, solar stocks haven't exactly delivered this year. The Invesco Solar ETF (NYSEMKT:TAN) is down 16%, while the S&P 500 has rewarded investors with over 10% in total returns at recent prices. A number of factors have affected solar stocks this year, not least of which are tariffs on solar panels imported into the U.S. severely impacting prices and hurting demand.

But that doesn't mean the sector should be avoided entirely; after all, there is enormous long-term potential for renewables to help meet global energy demand for decades to come. And the market sell-off has also created some easy-to-miss opportunities to invest in solar, including Vivint Solar Inc. (NYSE:VSLR),  First Solar, Inc. (NASDAQ:FSLR), and TerraForm Power Inc. (NASDAQ:TERP). 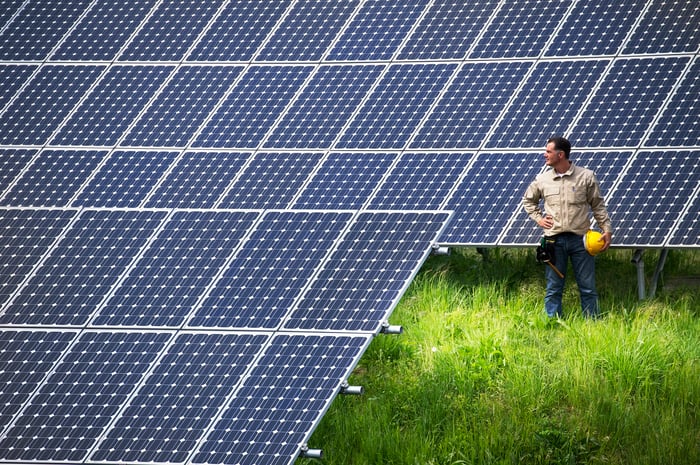 Here's why you should be watching these three solar stocks this month. There's a good chance you may even find it's time to shift from watching to buying.

Travis Hoium (Vivint Solar): The residential solar industry has been in a funk for most of the past year as rising costs for both solar panels and sales and marketing have hurt installers. But there are signs that installations are turning around in 2018. According to the latest U.S. Solar Market Insight report from Wood Mackenzie Power & Renewables, the residential solar market was 577 megawatts (MW) in the second quarter of 2018, flat versus a year ago. That compares to a 15% drop in installations in 2017, and if Wood Mackenzie's prediction of a flat year are true, we could be at the beginning of a long-term growth trend.

From a policy standpoint, conditions couldn't have been worse than they were in 2017. The federal government was cutting back on renewable incentives and encouraging fossil fuel development. In early 2018, tariffs were implemented on solar panel imports and most investors thought all was lost for the industry. But that may not be true.

Regulators in Florida have allowed for solar leases, which were previously banned in the state, and Nevada is opening up more choices to solar customers under new legislation. The biggest advancement is in California, where Gov. Jerry Brown recently signed a bill that will require all retail electricity to come from noncarbon sources by 2045.

This historical cash burner is suddenly swimming in sawbucks

Rich Smith (First Solar): I think September is going to be an interesting time to watch solar stocks, as California moves forward with legislation that will require utilities to provide electricity derived 100% from renewable sources by 2045 -- and for a majority of their power to be renewable by as early as 2030.

The California Assembly passed this bill late last month, and Gov. Brown signed it into law on Sept. 11. Now the question is which solar stock stands the best chance of benefiting from it?

I think First Solar is a good candidate -- partially because, as an American company, it should be largely insulated from the U.S.-China trade war that's been weighing so heavily on other solar stocks of late. But what really has me interested in First Solar is the company's financials. With $430 million in trailing free cash flow, and positive FCF generated in three of the past five years, First Solar has largely put to bed the worries that caused me to steer clear of the stock in years past.

These days, First Solar's generating so much cash that its balance sheet shows a net cash balance of $2.7 billion -- belying a GAAP income statement that depicts the company as unprofitable. Despite having a $5.1 billion market cap, First Solar's enterprise value is just $2.4 billion, giving it an EV/FCF ratio of less than 6.

I don't know about you, but to me that seems cheap enough to justify taking a gamble on a solar stock.

Jason Hall (TerraForm Power): Since Brookfield Asset Management's acquisition of a controlling stake, TerraForm Power is starting to realize its potential. Furthermore, there's a lot of potential for future growth.

Management has already identified -- and implemented -- actions that are cutting expenses and delivering revenue growth. Last quarter, these early steps resulted in 9.4% higher adjusted EBITDA and 5.6% more cash available for distribution -- or CAFD -- per share.

There's more coming on the cost-savings front, too. TerraForm signed an 11-year deal with General Electric to service its entire North American wind fleet that will cut maintenance costs starting next year, and also performed extensive infrared scans of its entire solar panel fleet, which it will use to increase output, boosting cash flows and improving returns from its existing asset base.

It's not just cost-cutting that's driving better results. Management has identified $500 million in investment opportunities within its existing portfolio, and has already inked multiple deals to expand existing projects and to buy out partners in others it partially owned.

Looking at the bigger, longer-term picture, TerraForm's growth prospects are even bigger, and under Brookfield's leadership, it should be able to deliver substantial returns to investors. With a current yield of 6.5% at recent prices and solid prospects to grow the payout over time, TerraForm is worth buying today, or at the very least putting on your watch list.