Please ensure Javascript is enabled for purposes of website accessibility
Log In Help Join The Motley Fool
Free Article Join Over 1 Million Premium Members And Get More In-Depth Stock Guidance and Research
By Rich Smith - Sep 23, 2018 at 7:13AM

Running the numbers of cost and quality, the new BE-4 engine comes out ahead.

"It's not a secret that the United States aims at replacing our engines by probably less reliable and more expensive but indigenous U.S. engines." -- Igor Komarov, ex-director general of Roscosmos

"But can we, say, just stop [selling rocket engines to the United States]? We can." -- Russian Deputy Prime Minister Dmitry Rogozin

Russian policy statements don't always make a lot of sense, nor are they always consistent. (Then again, that's not necessarily confined to Russia these days, is it?) Yet some of the statements coming out of President Putin's empire lately are raising the bar for incongruity. 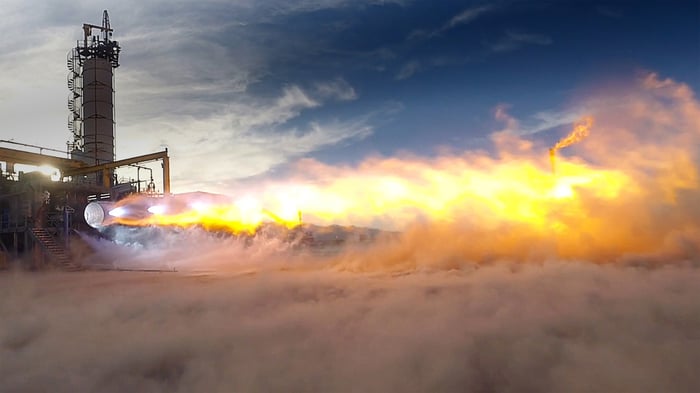 Blue Origin is lighting up the space race -- and building a new engine to free America from dependence on Russian rocket engines. Image source: Blue Origin.

On the one hand, faced with the prospect of American companies inventing a new rocket engine to power United Launch Alliance (ULA) Atlas V rockets, Russia's space agency has thrown shade on America's space industry. American engines are overpriced, says Mr. Komarov. And they're of worse quality than rocket engines made in Russia -- the implication being that ULA should buy Russian RD-180 engines instead of new engines from Blue Origin or Aerojet Rocketdyne (AJRD 0.37%).

On the other hand, Russia is threatening to refuse to sell the same engine that it is so eager to have ULA continue buying. Echoing past threats by Russian Deputy PM Dmitry Rogozin, last month Russia's Senate budget committee chairman Sergei Ryabukhin warned that Russia might halt rocket engine exports to the U.S. if it doesn't lift its "obnoxious and cynical" economic sanctions against Russia.

So does Russia want to sell us its rocket engines or not? What, a space investor wonders, will it take to make Russia make up its mind?

Russia makes up its mind

As it turns out, the answer to that question is "money." Backtracking on past threats, Deputy Prime Minister Dmitry Rogozin now says Russia must "weigh the pros and cons" from the viewpoint of "economic pragmatism." And when it does that, the scales tip decidedly in favor of continuing to make money off the American space program.

RD-180 sales are essential to Russia

The first part of that statement is clearly correct. DefenseNews.com estimates that Russian company Energomash, which builds rocket engines both for Roscosmos and for export, gets roughly half its annual revenue from the sale of massive RD-180 rocket engines to power ULA's Atlas V rockets. Additional revenue comes from sale of the smaller RD-181 engine used on Northrop Grumman's Antares rocket.

Without these revenues, Energomash -- barely profitable in most years -- would almost certainly slip into losses.

As for whether Russian rocket engines are "[more] reliable and [less] expensive" than their American competitors' rockets, though -- well, that's much more debatable.

According to TASS, Energomash sells its RD-180 engines to ULA for about $9.9 million apiece. That's pretty cheap, and with 860,000 pounds of thrust at sea level, one single RD-180 engine is powerful enough to serve as the core engine on a Lockheed Martin-designed Atlas V launch vehicle.

To replace the RD-180, two American companies are designing smaller engines that will work in pairs to launch ULA's new Vulcan rocket, expected to replace the Atlas V in 2020.

Aerojet Rocketdyne is hoping that ULA will choose its liquid oxygen (LOX)/kerosene-fueled "AR1" engine to replace the RD-180 on future ULA rockets beginning in 2019. Putting out 500,000 pounds of thrust at sea level, it's only about 58% as powerful as the RD-180. What's more, Aerojet is targeting a unit cost of about $10 million to $12.5 million for each AR1 engine -- meaning a pair will probably cost twice the sticker price of an RD-180. (And even that doesn't include amortization of AR1's development costs, expected to reach $1 billion.)

Blue Origin says that its LOX/methane-powered BE-4 -- currently the favorite to power ULA's Vulcan -- will be ready to fly by 2019. Blue Origin hasn't published an exact price for the BE-4, but promises that once developed it will sell for "about 30 to 40 percent less than the RD-180 engine."

This implies a sticker price as low as $6 million or $7 million -- but whether that's the cost of just one BE-4 engine (remember, Vulcan will need two of 'em to get off the ground) or the cost of a working pair hasn't been clarified. Potentially, at $7 million per engine, Blue Origin's solution could cost $14 million.

That would be 40% more than Russia charges for the RD-180. On the other hand, Blue Origin points out that with a combined 1.1 million pounds of thrust at sea level, a pair of BE-4s can lift as much as an RD-180 and a supplemental solid rocket booster could. Eliminating the need to buy a booster, says Blue Origin, would save $10 million per launch on heavy lift missions. In that scenario, two BE-4s could end up costing less than one RD-180 plus one supplemental booster -- a lot less.

The upshot for space investors

Net-net, it sounds to me like NASA and the Air Force won't pay too much of a premium by switching from Russia's RD-180 to Blue Origin's BE-4, and may even save money on some missions. But what about Komarov's assertion that U.S. engines are inferior in quality? Can the Air Force and NASA afford to risk switching from Russian engines to Blue Origin?

The RD-180's quality is undeniable. It's successfully powered 68 straight Atlas V flights into orbit for United Launch Alliance without a hitch. That being said, Blue Origin's got a pretty good reputation for quality in its own right. To date, its New Shepard reusable rocket (which uses a BE-3 engine, predecessor to the BE-4) has a 100% record of reliability, flying nine times in a row without incident. Indeed, several of those test flights were with the same rocketship, using the same engine -- which Russia cannot say about its RD-180.

While we won't know for certain how reliable the BE-4 will be until it begins flying, we shouldn't have to wait long for the answer. Vulcan's first flight -- and the BE-4's -- is scheduled for next year.

Assuming all goes well, America's reliance on Russian rocket engines could soon be at an end, and Blue Origin could have its first bona fide revenue stream, and be well on the way to becoming a viable commercial space company.