BMW AG (OTC:BAMXF) is inviting its global rivals to join its self-driving effort.

The company has already formed an alliance with several auto industry heavyweights and key technology firms that is aiming to deliver a new self-driving technology "platform" to the global market by 2021 -- and its R&D chief wants other automakers to know that it's not too late to join the party.

BMW is already working with rivals, and would welcome more

In an interview this week, Klaus Froehlich, BMW's chief of research and development, told Automotive News Europe that many of the company's rivals are now confronting the difficulty of developing a full self-driving system from scratch. His message to them: It's not too late to join BMW's effort. 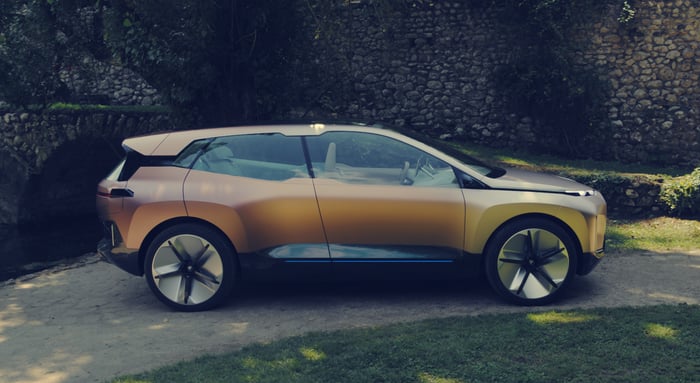 BMW's self-driving system will debut on the production version of the iVision NEXT, an electric crossover SUV that will be BMW's technology flagship. Image source: BMW AG.

The partners aim to deliver a technology platform by 2021 that will be scalable, allowing different levels of vehicle automation ranging from an advanced driver-assist system to -- they hope -- full-blown Level 5 no-human-needed automated driving.

Since then, several other big names have joined:

BMW expects to launch the system on its upcoming iNext, an electric crossover SUV intended as a technological flagship that is expected to launch in 2021. Other automakers will be able to purchase the system for use in their own vehicles starting at about that time.

Froehlich said that BMW would still welcome rival automakers into the group. But he noted that it might be too late for newcomers to participate in developing the first generation, which is due in 2021. The group is already planning a second-generation platform for delivery in about 2024, he said, and automakers are invited to join that effort now.

Where does BMW's effort stand in the self-driving race?

The race to deploy self-driving vehicles at scale is taking shape. As of right now, it appears that Alphabet's (NASDAQ:GOOG) (NASDAQ:GOOGL) Waymo subsidiary is solidly in the lead, with General Motors (NYSE:GM) not too far behind.

Waymo and GM both bring formidable lists of strengths to the battle -- lists that most other potential contenders will struggle to match anytime soon. That makes it somewhat hard to handicap the group that trails GM, a group that includes the BMW partnership as well as major efforts by Volkswagen (OTC:VWAGY), Ford Motor Company (NYSE:F), Apple, and several other automakers and technology companies.

BMW's effort has good partners (Mobileye is a very important player in this space) and ample funding -- but so do VW and Ford, and Apple has to be considered a serious contender as well. But given the known timelines, it's possible that the third-place trophy in this race will go to "everyone else," with several efforts succeeding in bringing Level 4 systems to market early next decade.

Long story short: BMW appears to be in a good position. But after Waymo and GM, the "race" to self-driving might not be much of a race after all.