Home to Vandenberg Air Force Base, one of America's two primary spaceports -- and to SpaceX, arguably the fastest growing space launch provider in the country -- there's no denying California is one of the most important states in the space race.

But did you know that California is also literally in the space race itself?

It's true. As of this month, multinational communications companies and sovereign nation states aren't the only entities designing, building, and launching satellites into orbit. The state of California -- just one-fiftieth part of the United States of America -- has announced that it, too, will design and build its own satellite, and launch it into space. 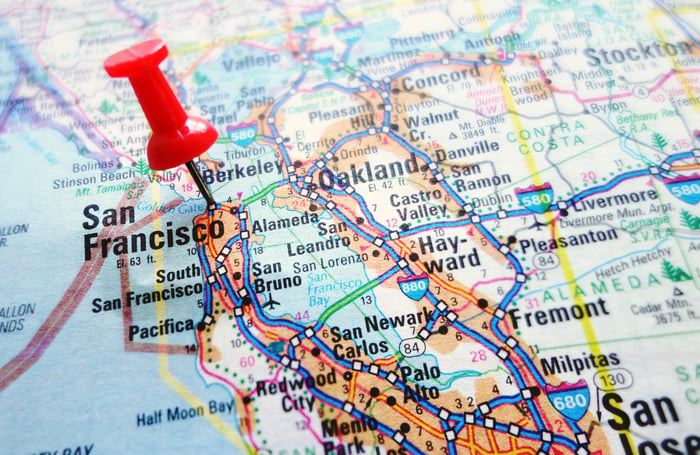 Last Friday, at the global climate change summit in San Francisco, Gov. Jerry Brown announced that California is "going to launch our own satellite -- our own damn satellite to figure out where the pollution is and how we're going to end it." To help with this project, California has retained the services of San Francisco-based Planet Labs (which although you may not have heard of it, now owns the largest constellation of satellites orbiting Earth).

"Governor Moonbeam" delivers on a promise

Dubbed "Governor Moonbeam" for publicly musing that California should launch its own satellite back in the 1970s, Gov. Brown has recently revived his satellite talk. In response to Trump Administration efforts to cut spending on satellite based research into global warming, Brown promised: "If Trump turns off the satellites, California will launch its own damn satellite."

Congress has since restored much of NASA's lost funding, and even increased it. Still, it appears Brown has decided to forge ahead with plans to build his own satellite anyway. As described, the idea is to turn over the satellite, once in orbit, to California's Air Resources Board to "pinpoint -- and stop -- destructive emissions" entering the atmosphere.

This sounds like an ambitious goal, but it's far from impossible. Satellite costs have fallen dramatically in recent years, to the point where Vector space launch company CEO Jim Cantrell says you can now buy all the parts needed to build a small, 50-pound satellite for about $25,000. Design and construction work to turn those parts into a working satellite will add to the cost, of course. But even so, Planet Labs' "Dove" earth-imaging satellites are said to cost well under $1 million each. Vector says it can launch such small satellites for as little as $1.5 million, and it's planning its first orbital launch for later this year.

In theory, Planet Labs should be able to put a satellite into orbit for California for under $2 million.

What "Planet" is this?

But what is Planet Labs, anyway? Believe it or not, while not yet a household name, Planet already has the largest constellation of satellites in orbit around Earth. Although the exact size of Planet's constellation varies over time, it generally stays above 150, and at one point last year included 180 medium resolution Dove and RapidEye satellites, and 13 higher resolution SkySats acquired from Google.

That's already enough eyes in the sky to permit Planet to snap 1.4 million 29-megapixel photographs of Earth daily, covering 300 million square kilometers of the planet's surface -- including the entirety of Earth's landmass.

Planet's plan is to use all of these images, which it's gathered and cataloged over time, to "index physical change on Earth the same way Google indexed the internet" and "gain smarter, more timely insights to solve our world's toughest challenges." This lines up nicely with California's desire to keep track of changing pollution levels -- it could also make Planet an even tougher competitor in the Earth imaging industry than it already is.

Perhaps what's most amazing about Planet, though, is the fact that it's managed to amass the world's largest satellite constellation in a very short amount of time (Planet was founded in 2010 ), without ever going public -- and on a relative (for global corporations) shoestring budget. Since its creation, Planet has raised a bit more than $200 million in private funding, and parlayed that into a fleet of nearly 200 satellites in orbit.

Crudely calculated, that implies a cost of only about $1 million per satellite, a price tag that makes California's plan to put its own satellite in orbit around Earth look eminently affordable. How has Planet accomplished this?

The incredible falling price of satellite design and manufacture is one factor to be sure. Also helping Planet achieve such scale in such a short period of time has been its use of low-cost launch missions carrying multiple satellites into orbit simultaneously, at rock-bottom prices. Granted, not every start-up has the wherewithal to nearly max out the payload capacity of an Indian PSLV rocket, filling it with cubesats. But now, with small rocket launch companies like Vector and Rocket Lab starting to come to the fore, the potential for new space companies to design, build and launch small satellites essentially on-demand -- for not much more than the cost of a single berth on a multi-satellite rocket launch -- means we could soon see more and more companies following in Planet's footsteps and beginning to create their own businesses in space. At the same time, more and more customers -- like California -- will find their access to space facilitated by these pioneers.

Even if most of these companies have yet to go public, and give us a chance to participate in their success, it's an exciting time to be a space investor. The sooner you start paying attention, the better prepared you'll be to pick the winners in this new space race once the IPOs start happening.