Please ensure Javascript is enabled for purposes of website accessibility
Log In Help Join The Motley Fool
Free Article Join Over 1 Million Premium Members And Get More In-Depth Stock Guidance and Research
By Rich Smith - May 26, 2018 at 7:18AM

Surprise: All the usual suspects stand to benefit -- plus a few companies you may not yet have heard of.

After famously gutting NASA's budget for earth science and climate change-related missions in 2017, is President Donald Trump having a change of heart on space?

It kind of looks like he is. The president raised his "ask" for NASA's space budget in February, requesting that Congress fund the National Aeronautics and Space Administration to the tune of $19.9 billion in fiscal 2019 -- giving the agency $300 million more than its medium-term forecast had counted on. And the news gets better from there.

Just a couple of miles away from the Oval Office, on Capitol Hill, Congress is working on an appropriations bill that would lift NASA's budget into a higher orbit. On May 8, the House Committee on Appropriations released its Fiscal Year 2019 Commerce, Justice, Science Appropriations Bill. As it regards NASA in particular, this proposed budget contains $21.5 billion in planned funding -- a number Politico says is $810 million more than NASA is receiving currently, and $1.6 billion more than the President requested.

Put down your calculators: That's a cool 8% bump into higher orbit, compared to what NASA thought it might be getting after seeing the president's proposal earlier this year. 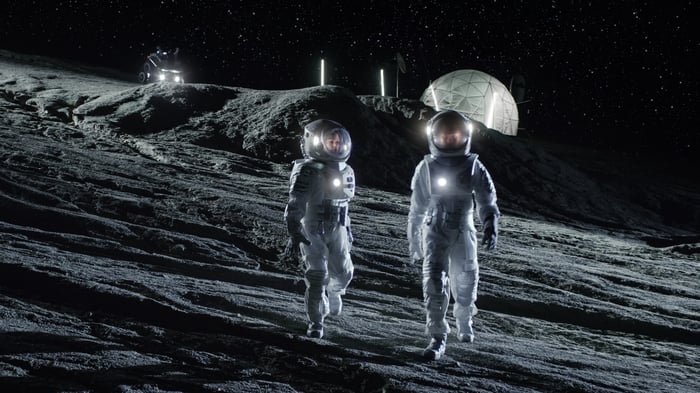 Which companies will win more money?

So who will get the loot? Believe it or not, more than half the House's increase in funding (a $459 million increase compared to fiscal 2018) is going to science programs -- $6.7 billion in total. And while the bill is short of specifics, this is money investors can probably expect will be going to satellite makers such as Boeing (BA 2.28%) and Lockheed Martin (LMT 0.83%), Northrop Grumman (OA), and Maxar Technologies (MAXR 1.88%), also to satellite launchers such as SpaceX, and Boeing and Lockheed's United Launch Alliance.

In fact, Boeing and Lockheed Martin look to be two-time winners, as the second largest bump in funding is going to help pay for deep space missions, and to NASA's Orion crew vehicle and Space Launch System (SLS), which are designed to carry them. Orbital ATK (soon to be absorbed into Northrop Grumman) and Aerojet Rocketdyne (AJRD 1.40%) are other key players on the SLS project. Congress wants to pour an additional $294 million into this program, funding it with $5.1 billion next year.

To the Moon, Alice!

It's harder to predict the winners in a separate category of space spending that may surprise you: Lunar exploration and development.

The House Appropriations budget contains nearly $1 billion in funds for projects tied to the moon:

Who will help NASA with all of the above? It's a safe bet that Boeing, Lockheed, and all the other "usual suspects" will bid for moon-related space work. But they'll have to contend with a rising tide of "new space" companies that hope to return us to the moon "smaller, better, faster, and cheaper" (so to speak).

To name just a few of these unlikelier suspects, tiny Moon Express recently won government approval to land robots on the moon to begin (initially small scale) moon-mining missions. Rocket Lab is another U.S. company that hopes to play a role, by providing the rockets that will deliver Moon Express's landers to the moon. And Amazon.com CEO Jeff Bezos's Blue Origin has been particularly vocal about his company's desire to help NASA out with moon missions.

For that matter, even SpaceX's Elon Musk has been making noises about how SpaceX wouldn't be averse to assisting with a moon mission (in addition to his ultimate objective -- a mission to Mars).

The bad news of course is that most of these new space companies mulling  moon plans -- everyone from small up-and-comers like Moon Express and Rocket Lab to household names like SpaceX -- are currently not available for investment. All of these companies are privately held.

The good news, though, is that now that Congress seems intent on pouring money into space, the chances of these companies living long enough to go public so that we can invest in them just got significantly better.