Please ensure Javascript is enabled for purposes of website accessibility
Log In Help Join The Motley Fool
Free Article Join Over 1 Million Premium Members And Get More In-Depth Stock Guidance and Research
By Rich Smith - Feb 17, 2018 at 10:43AM

America spends more on space than the rest of the world, combined -- and will continue to do so, when you look at the bigger picture..

It's official: On Monday, NASA Acting Administrator Robert Lightfoot confirmed that President Trump has asked Congress to fund NASA with $19.9 billion in fiscal 2019. That's $600 million more than the President asked for last year. But is it a lot, or a little -- or even too little to support America's ambitions in space?

Here are a few numbers for context. In 2009, NASA was awarded $18.8 billion in funding. From a pure dollar value perspective, NASA is getting more money today than it was a decade ago. Problem is, while NASA's budget has indeed gotten bigger over the past decade, it's grown less than 6% in 10 years. Over the same period of time, inflation has devalued the dollars NASA receives by more than 14%.

Result: NASA's budget isn't even keeping up with the pace of inflation. In terms of buying power, it's getting less money today than it was a decade ago. It's also getting way less money than it did a half century ago. 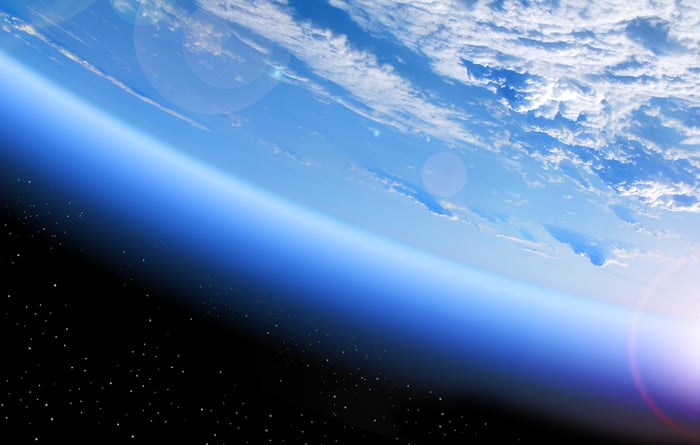 Earth is a big place -- and America spends half of Earth's investment in space. Image source: Getty Images.

At the height of the space race in the 1960s, the U.S. government poured more than 4%  of our federal budget into NASA. In the years since, that proportion has shrunk by roughly 10 times, to the point where today, astrophysicist Neil deGrasse Tyson laments that "just four-tenths of one penny on your tax dollar goes to NASA."

And yet, as investment banker Morgan Stanley pointed out last year in its massive report on the "Investment Implications of the Final Frontier," NASA spending is just one aspect of overall U.S. spending on space. When you add in spending on national security space missions -- spy satellites launched for the National Reconnaissance Office, GPS satellites for the Air Force, and rockets from United Launch Alliance to launch them all -- Morgan Stanley estimates that total U.S. government spending on space amounts to about $44 billion a year. And thanks in part to all this space business, Lockheed Martin (LMT 0.05%) and Boeing (BA -1.98%) have become the No. 1 and No. 2 largest U.S. government contractors, respectively.

Space is big. So are space budgets.

The $44 billion that the U.S. government invests in space annually makes up roughly half of all spending on space by governments worldwide. What's more, Morgan Stanley believes that American government spending will increase fast enough to maintain this relationship with the rest of the world over time.

Looking out to 2040, Morgan Stanley estimates that global governments will double their space budgets to $181 billion over the next two decades. The U.S. government, too, will double its space spending -- to more than $93 billion -- and thus continue to comprise roughly half of global space investment that year.

And yet, when you look at NASA's own "notional" budget predictions, after receiving a modest boost in spending next year, the agency is expecting to see its funding pared to about $19.6 billion in 2020 -- then staying there for the next three years. If NASA's right, and this is how things play out, then it's worth asking: What will the U.S. government be spending all of its space money on, if not on NASA?

One answer is: the military. Now, it's worth noting that Morgan Stanley isn't as pessimistic about NASA's budget as NASA is itself. MS actually predicts that NASA spending will roughly double over the next 20 years or so. Still, the investment bank believes military spending will grow even faster -- and grow off of a larger base, as well.

Why? Quoting the U.S. Navy's Space and Naval Warfare Systems Command (SPAWAR),Morgan Stanley notes that the Pentagon views space as "the ultimate high ground" for national security -- a vantage point from which one can observe everything happening down on Earth. Confirming the military's view of space importance, of the nine biggest "major domestic unclassified" space programs funded by the U.S. government and discussed in Morgan Stanley's report, at least eight of them have military applications. (And remember that these are only the un-classified programs.) They include:

Space is becoming so important to the military, in fact, that last year we saw Congress lay the groundwork for the potential creation of a military "Space Corps" as a new branch of the Pentagon separate from the Air Force.

Greater government spending on "militarized" space than on civilian space work isn't necessarily bad for investors, either. After all, we can invest in either realm -- and publicly traded contractors like Boeing, Lockheed, and Northrop all work on both military and civilian projects. The key point to keep in mind is that, so long as both types of spending are increasing, the investment possibilities will keep growing.

What's more, as U.S. government space spending shifts inexorably toward the military realm, it stands to reason that more and more civilian work will be taken over by private companies like SpaceX, Blue Origin, Rocket Labs, and Vector -- and investors' options for places to invest could grow accordingly if any of these companies choose to go public.