It took Chipotle Mexican Grill (NYSE:CMG) more than two years to roll out a loyalty rewards program after its Chiptopia experiment during the summer of 2016, but it's finally here. Customers in Phoenix, Kansas City (in Kansas and Missouri), and Columbus, Ohio, can enroll in Chipotle Rewards, ahead of a likely national rollout later this year.

There are a few things to like about Chipotle Rewards. Unfortunately there are more things to not like about the new program. Let's go over the pros and cons of the new customer-retention tool that Chipotle rolled out this week. 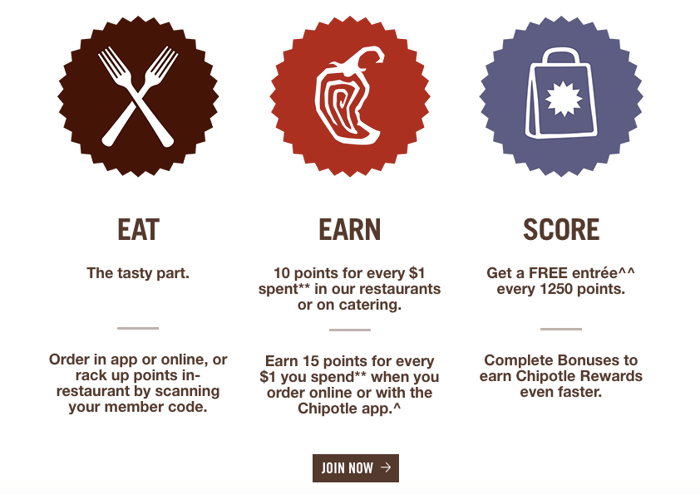 The biggest positive is that the program is finally here. Chipotle teased patrons and investors alike for two years by saying it was working on a permanent program after the three-month Chiptopia promotion, and it's now ready.

There is also a decent incentive to get folks enrolled. Chipotle is offering enrolled members an order of free chips and guacamole after using the program for the first time. It should smoke out some infrequent visitors with the lure of something free the second time they come around.

Chipotle Rewards is also encouraging folks to use the fast-casual chain's app. In-store purchases get 10 points for every $1 spent, but orders placed ahead of time online or through the Chipotle app score 15 for every buck. Once you win real estate on someone's smartphone, it's that much easier to score mobile order sales in the future.

Have you seen how much Chipotle you have to eat to get a free burrito? Every 1,250 points scores a free entree, translating into $125 spent in-store or $83.34 online. Chipotle pricing varies by market, but we're looking at roughly 15 meals at a store or 10 entrees purchase online or through the app to score a freebie. This seems like a lot of work.

Having to go through as many as 15 meals for a free barbacoa bowl or carnitas burrito is only going to appeal to the diehard visitors, the group that probably doesn't need Chipotle Rewards as an incentive to keep coming. Three summers ago, Chiptopia only had you come in four times during the same month before scoring free food.

Bulls will argue that it's good that Chipotle isn't desperate. Spacing out the rewards will make sure it doesn't have to give away much more than the side of chips and guac on the second visit. However, this misses the point of a loyalty rewards program. Few casual diners are going to sign up for this, and even those that do will quickly abandon the process after the second visit.

Chipotle continues on pace with its slow yet steady turnaround. It has grown its revenue between 7% and 9% in each of its past four quarters. Comps rose 3.3% in its latest quarter. Bringing in CEO Brian Niccol from Taco Bell continues to resonate with investors, and seems to be laying to rest Chipotle's painful two-year stretch of miscues.

Oppenheimer analyst Brian Bittner downgraded Chipotle stock to underperform on Monday. He feels that the stock's massive rally since Niccol was tapped as the chain's new helmsman is overdone. Wall Street's growth projections seem too ambitious. Bittner's note came before the market had the time to weigh the impact of Chipotle Rewards, but he -- like most casual observers -- probably isn't impressed. Chipotle Rewards is like last year's rollout of queso. It's coming out too late, and it doesn't offer much of an incentive to folks keep coming back. It just doesn't taste as good as you were hoping.