Turtle Beach (NASDAQ:HEAR) is one of the market's biggest winners year to date, up roughly 884% thanks to surging sales for the company's gaming headsets. Shares have cooled off a bit from their summer peak, dipping about 50% from the 52-week high of $34.50 per share, but the hardware company has still been on a tremendous run in 2018. The recent pullback might raise the question of whether now is a good time to establish or add to a position in the company.

The company trades at roughly 9 times this year's expected earnings. And it is valued in line with sales targets for the year, metrics that look appealing amid a backdrop of growth for esports and the overall gaming industry. That said, investors should familiarize themselves with some of the fault lines in the bull thesis before taking the plunge. 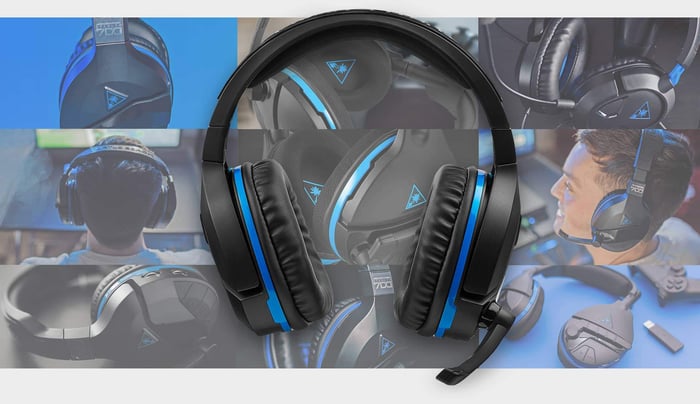 Much of Turtle Beach's recent success is being driven by the use of headsets for online "battle royale" games like Fortnite and PlayerUnknown's Battlegrounds (PUBG). These titles involve players eliminating competitors to be the last one standing on large maps. Using headsets opens up in-game communication and can be helpful in determining what direction attacks are coming from.

While the battle royale genre will likely be around in one form or another for a while, it's far from a given that it will retain its current level of popularity. Fortnite continues to post hugely impressive engagement, but there are signs that growth is slowing. PUBG's numbers are posting substantial declines despite still being impressive. These two titles, and Fortnite in particular, are the driving factor in increased headset sales, and the harm from a drop-off in popularity for battle royale games doesn't seem to be fully appreciated by some Turtle Beach bulls.

Some coverage on the stock seems to hold that increasing popularity for video games (and multiplayer gaming in particular) means that there will be more use of headsets for in-game communication and more sales for Turtle Beach. That won't necessarily prove to be true. The trend of increasing popularity for games and multiplayer modes has been ongoing for a while now, but the use of in-game voice chat has not grown neatly in tandem.

On the console side of things, voice chat had its breakthrough moment with Halo 2 on Microsoft's Xbox back in 2004, and saw increased integration and user engagement through the end of the decade before gradually losing favor among a substantial section of gamers. Dissatisfying experiences with other players or a simple lack of utility have prompted many players to forgo headsets, and voice chat is often neglected even in popular team-based games like Activision Blizzard's Overwatch. Growth for the number of esports-focused titles could be good for Turtle Beach, but it doesn't necessarily follow that there will be a sustained uptick for the sale of its headsets. 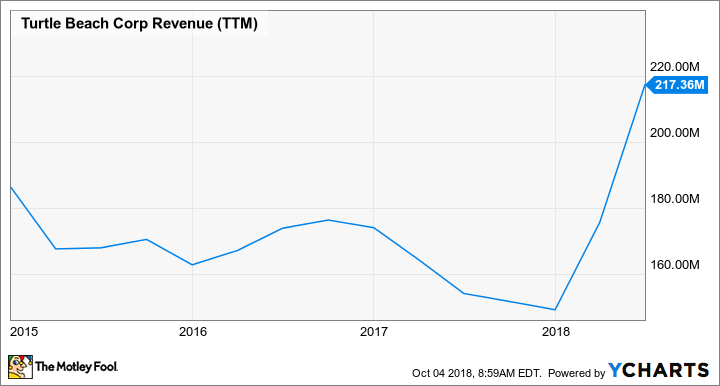 Revenue is surging thanks to Fortnite and PUBG, but sales before battle royale's exploding popularity don't suggest much tailwind from the increasing popularity of video games, or the fact that game design is becoming more focused on multiplayer modes. Competitive gaming saw increased interest from 2015 through 2017, and Newzoo estimates that revenue derived from esports leagues and content roughly doubled over the stretch. But that didn't translate to big sales growth for Turtle Beach and confounds the idea that growth for games equals growth for headsets.

Turtle Beach is on a roll, but there's no moat

Some have argued that Turtle Beach's collection of audio patents will insulate the business from competitive threats or allow it to collect licensing fees on other companies' products. It's true that the headset maker has proprietary technology for noise canceling and location-based sound, but these concepts are not themselves proprietary. Competitors can -- and already do -- replicate these features through their own technology.

Turtle Beach captured 45.5% of the console-gaming headset market in North America through the first six months of the year, and NPD Research Group reports that the company's $99 Stealth 600 line has been North America's top-selling headset in 2018. The perceived competitive advantage provided to players using headsets in the battle royale genre has been a sales driver for Turtle Beach, and the company's market share is undeniably impressive. But it's worth noting that many experts don't rank the company's headsets favorably against the competition.

A survey of recent gaming-headset rankings performed by leading tech-focused publications shows that products from brands including HyperX, Logitech, SteelSeries, and Razer are frequently ranked above those from Turtle Beach in comparable price ranges. While headphone brands like Beats have managed to leverage cultural cachet to retain pricing power and drive unit sales despite being broadly viewed by experts as offering inferior technology, it's not clear that Turtle Beach headsets will be able to sustain that effect.

There's also the issue of Turtle Beach's hardware being a one-off purchase for most consumers. Once gamers buy a headset, they might not have much reason to replace it within the next five years. Analysts are already guiding for growth to level off next year, with the average of targets collected by Reuters expecting sales and earnings to be roughly flat from 2018 to 2019. The company's lack of recurring revenue and inherent difficulty in differentiating hardware through product refreshes are real issues.

If the company can cement lifestyle-brand status in the way that Nike or Apple have, then it should live up to and exceed its current share price. Otherwise, Turtle Beach stock could continue to be a strong performer in the near term, but the company's lack of moat and reliance on battle royale games should worry buy-to-hold investors.