Shares of Indian automaker Tata Motors (NYSE:TTM) fell sharply on Tuesday morning, after the company announced that its important Jaguar Land Rover subsidiary will cut production after a sharp drop in sales in China.

Tata Motors is India's largest maker of commercial vehicles (trucks and buses), but much of its revenue comes from its Jaguar Land Rover subsidiary (JLR), which it purchased from Ford Motor Company (NYSE:F) in 2008. JLR accounted for 80% of Tata's $44.2 billion in revenue in the fiscal year that ended on March 31 and -- more to the point -- all (and then some) of its operating profit for the year. 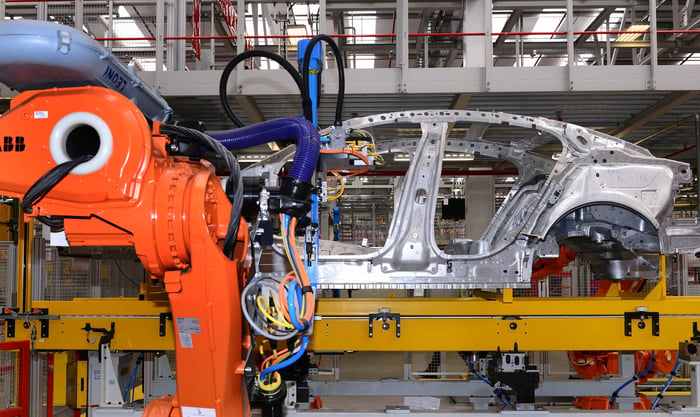 Simply put, as JLR goes, so goes Tata. And JLR isn't going so well right now: Its global sales fell 12.3% last month, largely due to a 46% decline in its sales in China. Steeper import duties and an ongoing trade war with the United States have hurt demand for vehicles from global automakers in China, particularly luxury-brand vehicles.

JLR is also facing a drop in demand for diesel-powered models over air-quality concerns, particularly in Europe. Until recently, diesels accounted for just under half of its sales.

In response, JLR said it will cut production at two factories in the U.K. Its Solihull plant will be idled for two weeks, starting on Oct. 22, and its Castle Bromwich factory will shift to a three-day work week (down from five) until the beginning of December.

Because automakers book revenue when vehicles are shipped (not when they're sold), it's likely that those production cuts will put significant dents in Tata's revenue and operating profits in the quarter that will end on Dec. 31.

JLR joins a growing list of global luxury-vehicle makers that have cut production or profit guidance (or both) on concerns about the ongoing spat between the U.S. and China. Until that situation is resolved, it's hard to say how JLR -- and Tata -- will fare.