The sell-off earlier this month may or may not be over. But investors with long-term views shouldn't really care. As long as you buy good companies for reasonable prices, everything else is noise.

If you're looking for high-quality large-cap stocks to add to your portfolio this month, three of our Motley Fool contributors have some ideas. Here's why you should consider Berkshire Hathaway (NYSE:BRK.B), Cisco Systems (NASDAQ:CSCO), and AT&T (NYSE:T). 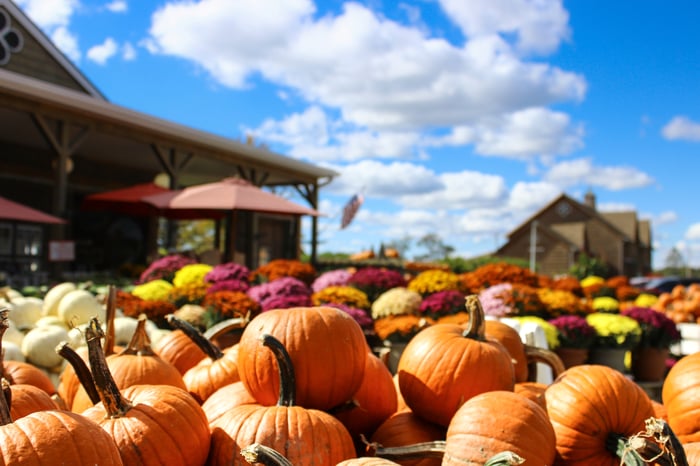 Ready to reap rewards in a market decline

Tyler Crowe (Berkshire Hathaway): Perhaps one of the most ridiculous investment takes out there right now is that Berkshire Hathaway's immense cash pile isn't a good thing. Sure, the value of cash deteriorates over time thanks to inflation, and Warren Buffett has admittedly said that it is way more cash than necessary to run the business effectively. That said, Berkshire Hathaway looks like an incredibly attractive large-cap stock right now that has an enviable position. It is, arguably, the company best suited to benefit from a market downturn.

There are two reasons that Berkshire's portfolio is flush with so much cash. One is that the company generates a stupid amount of cash each quarter (fun fact: A stupid amount is the technical term for $22 billion in free cash flow over the past 12 months) and, in this year's letter to shareholders, Buffett lamented about how valuations made it hard to justify making too many deals today. So Berkshire's cash pile continues to grow as a result.

If the market were to decline significantly, though, it could open up a lot of buying opportunities for Berkshire. You only need to point to its monumental purchase of Burlington Northern Santa Fe back in 2009 as an example of Buffett taking advantage of market conditions to enrich Berkshire's shareholders. The list of people you would want to give $100 billion to invest is incredibly short, and Buffett would likely be at the top.

At a price-to-book value of 1.47 times, Berkshire's stock shouldn't be considered cheap or expensive. With a reasonably priced stock today and perhaps the largest upside should the market decline, Berkshire Hathaway appears to be one of the best large-cap stocks to buy right now.

Big tech at a discount

Tim Green (Cisco Systems): The stock market sell-off in early October sent shares of Cisco down nearly 10%. It's a good time to take advantage of that markdown and pick up shares of this dominant tech company.

Cisco remains the king of the enterprise networking hardware market, despite constant pressure from low-cost alternatives. Cisco controlled 54.9% of the market for Ethernet switches and 36.7% of the market for service provider and enterprise routers in the fourth quarter of 2017, according to IDC. Both numbers are trending down, but the competition is far behind, especially in the switching market.

One way Cisco is holding onto its market share is by moving to a subscription business model. The company's Catalyst 9000 switches are sold as part of a subscription package, and they've been "the fastest ramping product that we've ever built," according to CEO Chuck Robbins. Nearly one-third of Cisco's revenue is now recurring, and that number should edge up in the coming years.

Analysts are expecting Cisco to produce adjusted earnings of $2.99 per share in fiscal 2019, which kicked off at the end of July. That puts Cisco's price-to-earnings ratio at just about 15. That's a reasonable price to pay, especially considering a solid 2.9% dividend yield.

If tech stocks continue to get pummeled, Cisco stock could drop further. But that would just make it a better deal.

Sean Williams (AT&T): I know I'm not going to win any bonus points for originality here, but has anyone really taken a look at how inexpensive AT&T is lately, especially following the completion of its Time Warner acquisition?

In recent years, telecom giant AT&T has vastly underperformed the broader market for one simple reason: It lacked growth. With the Federal Reserve keeping interest rates near historic lows for seven years, it gave growth companies a chance to pile on the gains. But with the stock market beginning to look toppy, value stocks like AT&T may begin to come back into focus.

On a nominal basis, AT&T is valued at just 8.8 times Wall Street's consensus 2019 earnings-per-share forecast. If the company meets or exceeds this projection, it'll represent the lowest price-to-earnings ratio for AT&T in more than a decade. But unlike recent years when wireless subscriber growth and a trickle of video additions allowed the company to grow sales and earnings by a low single-digit percentage, AT&T has actual growth up its sleeves.

For starters, the recently completed acquisition of Time Warner gives the company access to premium networks like CNN, TBS, and TNT. Consider these the dangling carrots that AT&T can use to attract wireless subscribers away from competitors and onto its network. Adding these premium cable networks should also help with advertisement pricing power.

AT&T is also in the midst of rolling out 5G networks. Like video game consoles, updates to wireless technology don't happen all that often, but when they do, it can spark a growth revolution as consumers eat up data and seek new devices to download this data. Though the 5G bump could take a few quarters before it's really reflected in AT&T's results, I'm relatively convinced it's going to be a growth accelerator for the company over the next three to five years.

Add on a secure 6.3% dividend yield as icing on the cake and you have what I believe is a tasty large-cap stock to consider buying in October.