It could be a subdued quarter. Wall Street analysts expect Ford's earnings to fall from the third quarter of 2017. Analysts polled by Thomson Reuters expect Ford to report earnings of $0.30 per share, on average, versus $0.43 per share in the year-ago period, on revenue of $33.68 billion, roughly flat from a year ago.

Here are two key things to watch for as Ford's earnings report unfolds on Wednesday. 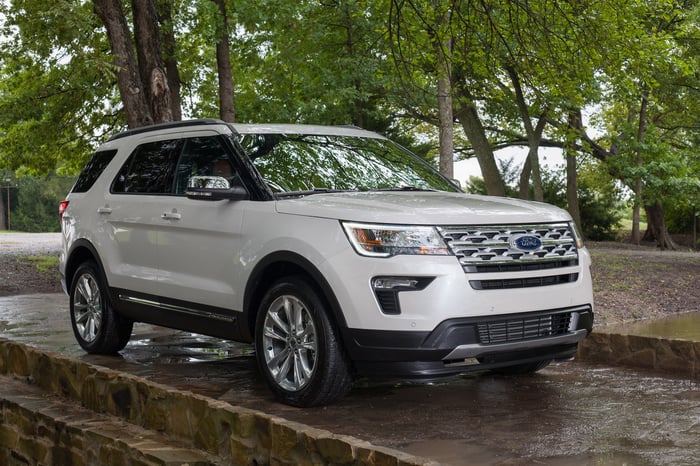 Ford has refreshed the Explorer twice since its 2011 debut, but its age is hurting Ford's pricing power. An all-new Explorer arrives next year. Image source: Ford Motor Company.

Ford's U.S. sales fell 3.7% in the third quarter, versus a 2.2% decline for the overall U.S. light-vehicle market, despite increased incentives. In China, its sales were down a worrisome 37.2% over the period. (Ford's sales in its other key market, Europe, rose slightly -- 0.6% -- in the third quarter.)

A big part of Ford's problem in both the U.S. and China is the age of its product lineup. "The company's downward trajectory in sales is a reflection of an aging product lineup with fading appeal for shoppers, and Ford has turned to increased incentives to prop up demand," said Edmunds analyst Jeremy Acevedo.

Ford has said that all-new versions of the Explorer and Escape will arrive sometime in 2019, and that a crossover-like replacement for the Fusion is reported to be in the works. But given the erosion we've seen in Ford's sales and margins over the past few quarters, time is of the essence. Watch for more details on Ford's product-launch calendar during the earnings call.

The consensus Wall Street estimates call for lower per-share profits from a year ago, on about the same amount of revenue. That suggests concerns about Ford's profit margins, and those concerns may be justified. Ford's "adjusted EBIT" margin (earnings before interest and tax, minus one-time items, as a percentage of revenue) fell 1.2 percentage points from the year-ago period to 5.2% in the first quarter of 2018, and 2.7 percentage points to 4.3% in the second quarter.

While rising commodity prices have had an impact on Ford's margins over the last year, as noted above, the age of Ford's product line is a big part of the problem. While waiting for new products to arrive, Ford's executives are looking at other ways to boost margins. One example: Ford's global products chief, Jim Farley, told Automotive News last week that the company recently discovered that its profit margin varies on some vehicles from region to region inside the United States. It has begun adjusting the way it allocates vehicles to dealers around the country, sending more inventory to regions where it can make the best returns.

Watch how Ford's adjusted EBIT margin compares with last year's -- and listen to see if Ford executives talk about other margin-boosting initiatives that could begin to pay off before Ford's new vehicles begin arriving at dealers next year.