It hasn't been a great year for the industrials sector on the whole: As measured by the iShares US Industrials ETF (NYSE: IYJ), the sector is flat on a year-to-date basis at the time of writing. But The Boeing Company (NYSE:BA), HEICO Corporation (NYSE:HEI), and CSX Corporation (NASDAQ:CSX) have significantly outperformed the sector, as well as the S&P 500 index. Let's take a look at why, and whether they can continue.

Boeing's rise in 2018 has been driven by a combination of continuing strength in its end markets and good margin execution; the company has also overcome pressures on its supply chain, enabling it to hit its airplane production targets.

As you can see in the table below, management has increased revenue and earnings guidance in 2018 on the back of better than expected commercial airplanes (BCA) margin, an improvement in defense spending (BDS), and growth in global services (BGS) outlook.

The good news is these positive trends could continue. For example, CEO Dennis Muilenburg believes Boeing is on track to hit a target of 15% BCA margin by the end of the decade. Boeing can get there by both continuing to cut supply chain costs and generating operating efficiencies as it ramps airplane production in response to strong end demand.

Similarly, a buoyant commercial aviation market is creating opportunities for BGS to expand. Boeing's purchase of aerospace parts company KLX Aerospace for $3.2 billion and its partnership deal with France's Safran to develop auxiliary power units for aircraft are signs of Boeing's plan to expand revenue and margin.

The key strength shared by BCA and BGS is that they can both expand margin in response to strong market conditions. So as long as the commercial aviation market remains in growth mode and Boeing can deal with supply chain pressure, it's likely its margin will expand, too.

It's been a pretty good 2018 for the railroads, and CSX is the best performer to date. The interesting thing about railroads compared to the industrial sector at large is that railroads usually benefit from higher commodity prices, whereas many industrial stocks have had issues with rising raw material costs this year.

Of course, rising commodity costs are often a symptom of strong economic growth, and that's good news for CSX's shipments of chemicals, minerals, and metals & equipment, while export demand for U.S. coal has led to a 6% increase in CSX's coal revenue in 2018 on a year-to-date basis. Throw in an 8% increase in revenue from intermodal revenue (highly aligned with economic growth) on a year to date basis, and CSX is pretty much firing on all cylinders in 2018.

Moreover, management is making great progress on its ongoing efforts to cut costs: The recent third-quarter results saw the company reporting a record low operating ratio of 58.7%, compared to 68.4% in the same period last year (a low number is good, as it means operating costs are falling as a share of revenue). This is partly a consequence of the successful implementation of precision scheduled railroading, an operating model developed by legendary former CEO Hunter Harrison and one so successful that Union Pacific is adopting it.

As ever, the question is: What about conditions going forward?

I think there should be a note of caution here. While most commentators are forecasting U.S. and global GDP growth to continue in 2019, the rate of growth is expected to slow, and U.S. industrial production growth has been forecast by FedEx to slow to 2.7% growth from 3.7% in 2018. That could cause commodity price growth to moderate, and loosen the currently tight trucking capacity, which might impact intermodal carload pricing.

In other words, conditions might not be quite so good in 2019, and that could cause a lowering of expectations for CSX and other railroads.

Why HEICO Corporation stock is up 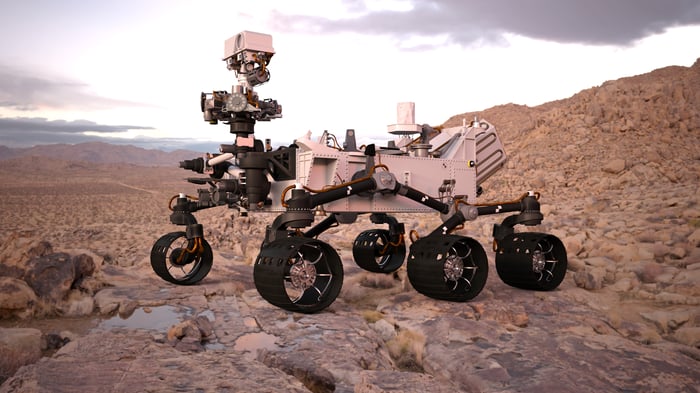 Both segments have done well due to the improving outlook in commercial aviation and space & defense (see Boeing's hike in full-year BDS guidance above), but the ETG segment has really stood out.

As you can see below, the big increase in expectations comes from ETG; however, most of the increase in guidance is due to acquisition-led growth. For example, in its first-quarter earnings report management expected ETG organic net sales growth in the mid-to-high-single-digit range, but come the third-quarter this estimate was pared back to "mid-single digits."

Provided Boeing avoids any supply chain issues with its airplane production ramps, investors can expect more margin expansion. But it's hard to see how conditions are going to get noticeably better for CSX, particularly if demand growth for bulk commodities drops.

Turning to HEICO, the company's performance has been excellent and aviation trends remain positive, But much of its growth has been acquisition-led, and there's no guarantee it can continue. Of the three, Boeing looks the best placed to continue its uptrend.

Can These 3 Stocks Keep Up Their Sector-Beating Streak? @themotleyfool #stocks $BA $CSX $HEI Next Article
Current