One of the most hotly debated issues surrounding Ford Motor Company (NYSE:F), its investors, and analysts was whether or not Detroit's second-largest automaker should cut its dividend with overseas losses piling up and a plateauing North America profit engine. Ford isn't budging from its stance that it can and will maintain its dividend, and the blockbuster third-quarter from Ford Credit backs that up. Let's dig into Ford's often-overlooked Ford Credit business to see why its strong third quarter should give investors more confidence in the dividend -- currently yielding an eye-popping 7.3% -- being maintained.

It's often hyperbole to use the terms "game-changer" or "blockbuster," but the latter is definitely appropriate for Ford Credit's third quarter since it generated earnings before taxes (EBT) of $678 million. That's its best quarterly result in more than seven years. The impressive result was 13% higher than the prior year and driven by favorable lease residual performance from higher auction values as well as a favorable volume and mix. You can see exactly how much those two factors boosted Ford Credit's third-quarter result. 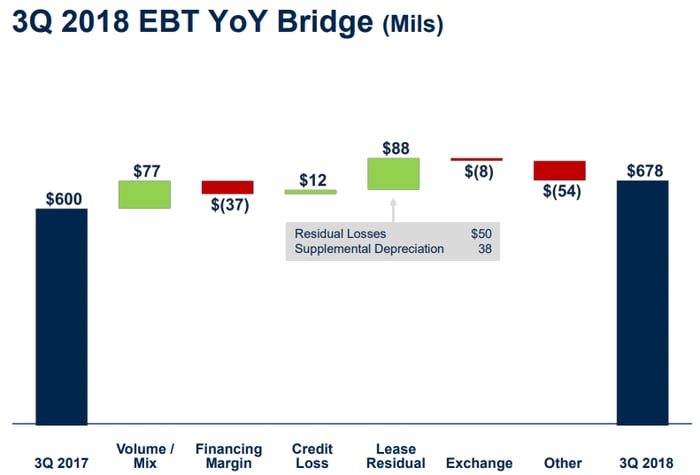 To help emphasize just how important Ford Credit is to the overall company business, let's compare it to some automotive segments. The South America, Europe, and Asia Pacific regions respectively lost $152 million, $245 million, and $208 million. Even when you add in Middle East & Africa, which posted a modest $47 million pre-tax profit, those four regions combine for a staggering $558 million loss. Essentially, Ford Credit more than offset Ford's stalling overseas business.

One could easily argue that Ford Credit is the company's second most important entity outside of its North America region, which powered a $1.96 billion pre-tax profit during the third quarter. Ford Credit's pre-tax profit will swing with residual values, and could plunge in the event of a steep recession, but it's been consistent over the past seven years. And that's incredibly good news for investors eyeballing Ford for its juicy 7.3% dividend yield (more on that below). 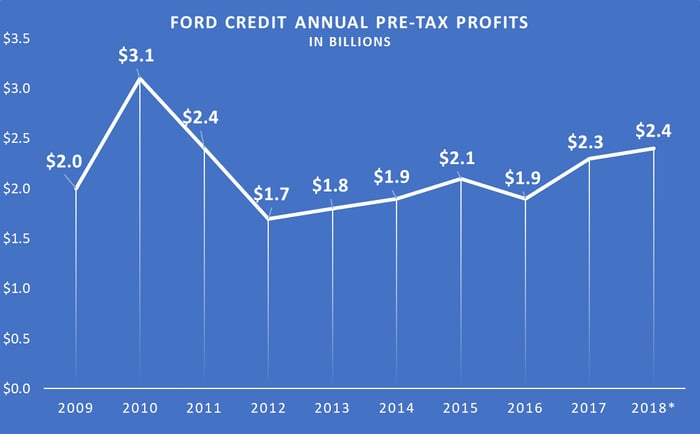 One of the biggest question marks looming over Ford investors' heads over the past three to four months was whether or not management would be forced to cut its dividend. After all, pouring capital into mobility projects, driverless vehicle technology, and electrified fleets isn't cheap, especially at a time when the U.S. new vehicle market is peaking and its business overseas is soft. But thanks to a shift in Ford Credit's strategy, Ford's dividend should be easily maintained, here's why.

Before recently, all of Ford Credit's cash generated would be reinvested back into its business to grow managed receivables, or the base of loans that generate cash.  However, Ford Credit has grown to just about the size Ford wants it, especially considering the slowing sales in the U.S. market. Rather than reinvest that cash back into Ford Credit, it will now be sent back to Ford to support the dividend. Ford CFO Bob Shanks is aiming to send roughly $1.6 billion to $1.7 billion annually from Ford Credit to the overall business, which, on its own, would pay for about 70% of its dividend. Plus, Ford always has the option to stop paying out its supplemental dividend without cutting the core dividend. 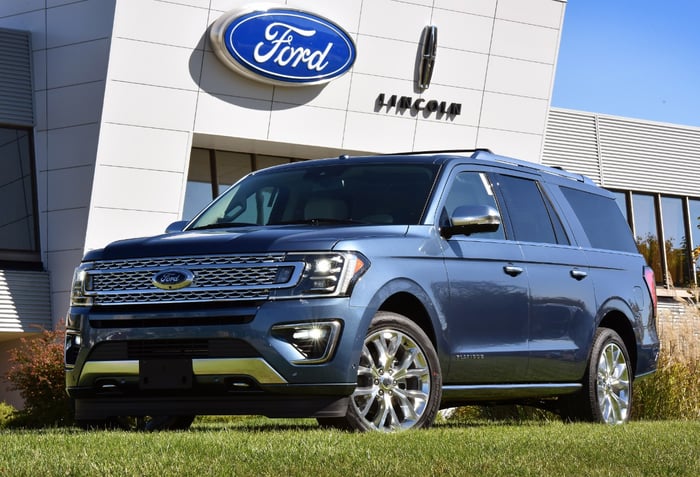 I've been shouting it for a while now, but Ford Credit has been a massive competitive advantage in the years since the great recession, and General Motors Finance is only now catching up -- if you remember, General Motors had to get rid of its finance arm during its bankruptcy. Not only did Ford Credit generate more pre-tax profit than what four regions overseas lost, it can also help support Ford's 7.3% dividend. And considering that dividend is one of the biggest advantages of owning Ford's stock right now, as its stock price continues to lag, Ford Credit's blockbuster third quarter is something investors shouldn't overlook.