Hold onto your pencils. The graphite inside them may be worth more than you imagine.

Graphite producer GrafTech International Ltd. (EAF -0.46%) is often mentioned as a potential play on miracle-material graphene -- itself the basis for construction of such supermaterials as carbon nanotubes, which could be strong enough to build a space elevator. Today, unfortunately, it's shares of GrafTech that are taking the elevator -- down.

Following the announcement of its third-quarter earnings today, GrafTech's shares are down 5.4% as of 3:45 p.m. EDT. The good news, though, is that's less than half the losses they endured earlier today, when the stock was off by nearly 13%. 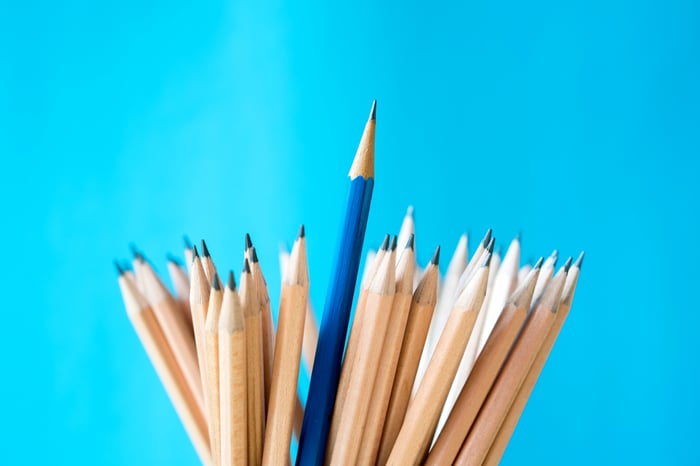 You may have a (small) fortune in your pencil case. Image source: Getty Images.

Why are investors so down on GrafTech? That's hard to say. After all, the company reported 231% revenue growth in Q3, to $454.9 million, and it was profitable as well with $0.67 per share in GAAP (generally accepted accounting principles) profit -- much better than the $0.01-per-share loss it had reported in last year's third quarter.

That sounds like a pretty unbelievable improvement -- but go ahead and believe it anyway. GrafTech management explained that "an increase in the weighted average realized price for graphite electrodes" is the reason for the explosion in sales growth. Such electrodes more than tripled in price over the past year, to $9,744 per metric ton, so the sales rise was directly tied to a rising price of the goods GrafTech is selling.

Granted, this dynamic may raise the risk that "what goes up" could come right back down again, and plunge GrafTech into losses. This may be what's worrying investors today. But once again, GrafTech says there's no cause for concern:

GrafTech has successfully sold approximately two-thirds of its cumulative long-term production through three- to five-year, fixed-volume, fixed-price take or pay contracts. These contracts provide reliability of long-term graphite electrode supply for customers and stability of future operating results for shareholders. Substantially all of our 2018 production is contracted or committed through these long-term contracts and short-term purchase orders.

Seems the good times for GrafTech may be here to stay -- or at least through the end of December.