Advertiser churn, rising interest rates, and higher costs are all expected to weigh on the real estate platform's profits.

Zillow Group (Z -0.78%) (ZG -0.91%) reported third-quarter results on Nov. 6. Its leading collection of online and mobile real estate brands remain popular with homebuyers and renters alike, but a host of factors forced the company to once again reduce its full-year guidance.

Visits to Zillow Group's mobile apps and websites rose 13% year over year, to 1.9 billion, with traffic hitting an all-time high of more than 195 million unique users in July. In turn, revenue from real estate agents who pay to advertise on Zillow's platform jumped 18%, to $232.7 million.

In addition, Zillow Group's rental revenue leapt 31%, to $37.3 million. The gains were driven by a 31% increase in the number of rental listings on Zillow's mobile apps and websites, signifying greater adoption of the company's offerings among landlords, property managers, and renters.

Mortgage revenue, however, fell 12%, to $18.4 million. This came despite a 13% increase in the number of mortgage loan information requests by consumers during the period. The revenue decline was mostly due to Zillow's transition from a cost-per-lead business model to a new subscription-based format, which management believes will improve results in future quarters.

In his letter to shareholders, CEO Spencer Rascoff provided an update on this important new segment of Zillow's business.

Just a few months after launching this new business, Zillow Offers is ramping fast and our team is seamlessly executing the roll-out into new markets. The Zillow Offers team is managing renovations on time and under budget. On average, during the third quarter, homes were sold well ahead of our 90-day target. Our unique data set provides insight into the homes that consumers are shopping for and allows us to effectively advertise the homes we buy even before we are ready to relist them.

Still, the investment Zillow is making in its home business is taking a toll on profits. The segment generated a pre-tax GAAP loss of $16 million in the third quarter.

All told, adjusted EBITDA -- which excludes share-based compensation and acquisition-related costs -- declined 7%, to $66.2 million. And Zillow delivered a $492,000 GAAP net loss compared to a $9.2 million gain in the prior-year period. 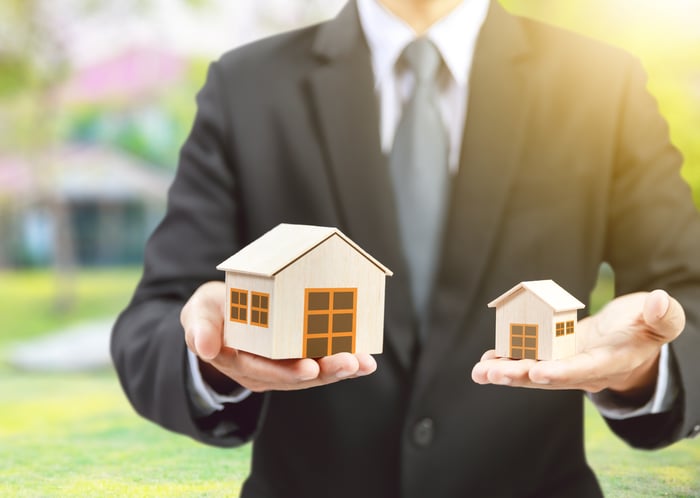 Rascoff said that recent changes to Zillow's advertising model designed to reduce low-quality leads is leading to higher churn rates among advertisers. Zillow expects this situation to improve once agents begin closing more deals from these higher-quality leads, but for now, the company is reducing its full-year financial forecast.

Moreover, Zillow warned that rising interest rates, which tend to reduce demand for refinancing, and higher compensation costs due to a highly competitive job market might also weigh on its results.

As such, Zillow is now guiding for:

Still, Rascoff remains confident that Zillow is taking the right steps to position the company for long-term success.

"Zillow Group is undergoing a period of transformational innovation, including our new Premier Agent lead validation and distribution process, Zillow Offers, and now mortgage origination, which together will provide more of an end-to-end real estate transaction experience for consumers," Rascoff said in a press release. "We believe that these changes will have positive long-term effects for consumers, our industry partners, and our business."