Please ensure Javascript is enabled for purposes of website accessibility
Log In Help Join The Motley Fool
Free Article Join Over 1 Million Premium Members And Get More In-Depth Stock Guidance and Research
By Danny Vena – Nov 8, 2018 at 6:00AM

Even after beating on the top and bottom line, the Tinder parent experienced a brutal sell-off. Is the honeymoon over?

Going into its third-quarter earnings report, there was a lot of optimism around Match Group (MTCH). The Tinder parent had beaten estimates and raised guidance in each of the previous two quarters, and the stock had soared 64% year to date ahead of the earnings release. Solid growth had been fueling the company's impressive run, and shareholders were hoping for more of the same.

Investors weren't feeling the love, however, and the stock fell as much as 20% in the wake of the report. Let's look at the results and see what caused the romance to fade. 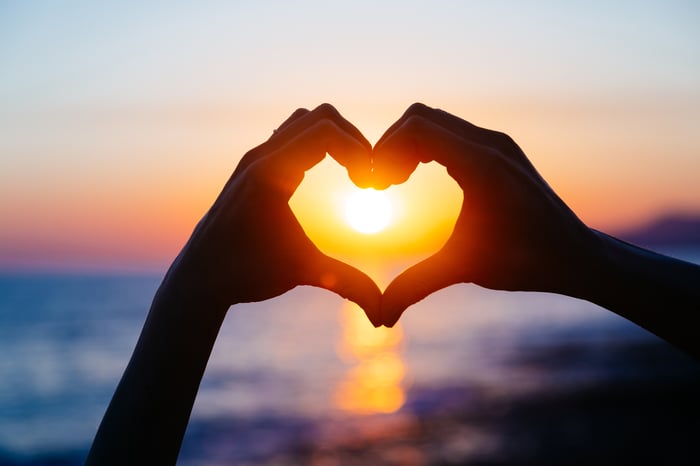 It started out well enough...

At first glance, the results seemed like they'd provide everything investors were looking for. Revenue grew to $443.9 million, up 29% year over year, exceeding both analysts' consensus estimates of about $437 million and the high end of management's guidance, which topped out at $440 million. Adjusted EBITDA of $165 million grew 38% year over year, reaching the high end of the company's forecast. GAAP earnings per share of $0.44 came in 33% higher than analysts' expectations.

The results were broad-based, as North American revenue grew 25% year over year, and Match's international expansion continued unabated, with revenue increasing 38% compared to the year-ago period.

These impressive financial metrics were driven by strong performance in the underlying business as well. The number of average subscribers grew 23% compared to the prior-year quarter, with an 18% increase in North America and 29% growth in international markets, both year over year. Each user was more lucrative as well, as the average revenue per user (ARPU) increased 6% compared to the prior-year quarter.

Tinder was again the star performer, with average subscribers soaring 61% year over year; each customer also spent more, as ARPU climbed 24%. The subscriber base added 1.56 million users over the past year, bringing the total to over $4.1 million. The growth accelerated sequentially, with 344,000 new subscribers outpacing the 299,000 that joined up last quarter.

The company also gave investors an early holiday gift, announcing a special dividend of $2.00 per share for both classes of common stock. The payout would be made on Dec. 19, to shareholders of record as of Dec. 5. This will boost the company's capital return for the year to $646 million, with $560 million for the special dividend and share repurchases of $86 million as of Sept. 30.

"Match Group delivered another quarter of strong top and bottom line growth, with Tinder continuing as our growth engine," commented Mandy Ginsberg, Match Group CEO. "We are making product and marketing investments in our brands to drive growth across our portfolio."

With all the seemingly positive news, why was Match selling off?

There was trouble in paradise because of Match's fourth-quarter forecast. The company is expecting revenue in a range of $440 million to $450 million -- year-over-year growth of 17.4% at the midpoint of its guidance -- and adjusted EBITDA of between $160 million and $170 million. This failed to impress investors, however, because the revenue guidance is short of analysts' consensus estimates of $454 million.

Match said its full-year results were on pace to approach the high end of its guidance, with revenue of about $1.72 billion and adjusted EBITDA near $650 million.

It's important to note that guidance is more art than science. In light of the significant and ongoing growth that Match has achieved, investors should take today's drop for what it is -- market noise. While the forecast was lower than many were hoping for, Match has a track record of being conservative with its guidance. When we look back on this a few months from now, we'll likely see that this pullback was a buying opportunity.