Ford just acquired an electric-scooter-rental startup. Here's what it's thinking.

It's the latest in a series of moves that Ford has made to expand its presence in "mobility" offerings that go well beyond its core business of selling cars and trucks. What is Ford thinking, here?

Ford buys Spin: About the deal

Spin's scooters are "dockless," meaning they don't have to be returned to a set location. The company has so far focused on offering its scooters in urban environments and on college campuses; it's currently operating in nine U.S. cities, including Washington, D.C., Denver, and Detroit, and on five college campuses.

Reuters reported that Ford will invest roughly $200 million in Spin. 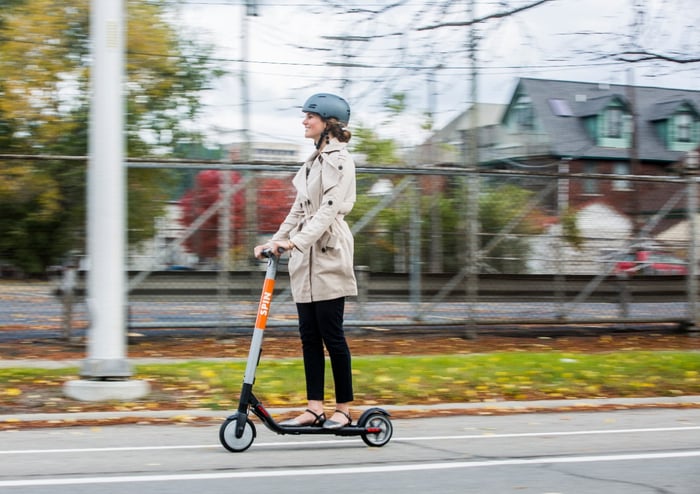 What is Spin's business?

Spin is one of several companies that have entered the fast-moving micro-mobility space, a sector that has only begun to become significant in the last several months. Briefly, Spin offers short-term rentals of "e-scooters" in urban areas. (What's an "e-scooter"? Imagine a child's Razor scooter with an electric motor, a battery, and a wireless internet connection added. It's a simple way to get around more quickly than walking.)

Some of Spin's rivals have already drawn investments at hefty valuations. Lime was valued at over $4 billion in its most recent round, and its investors include ride-hailing giant Uber Technologies and Alphabet's Google Ventures. Bird, which has a strong presence in Los Angeles, was recently valued at $2 billion and counts venture-capital heavyweights Greycroft Partners and Sequoia Capital among its investors.

Why the huge interest? The opportunity could be huge: A recent report by Populus showed that nearly half of all trips made in the United States are three miles or less in length -- a distance that could be well-served by electric scooters in some situations. 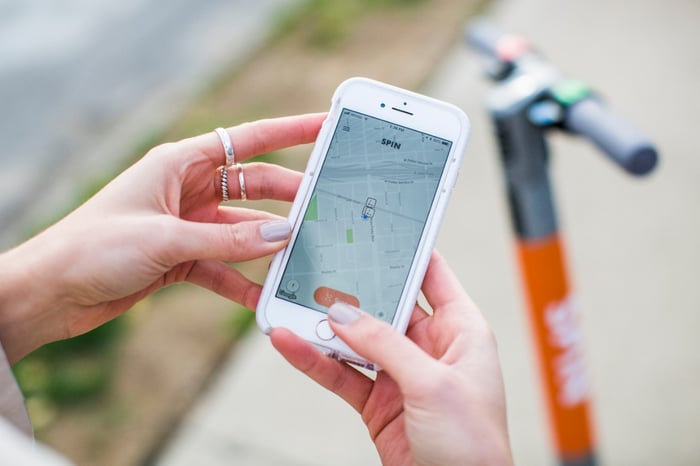 Why does Ford want a scooter-rental company?

Ford sees itself transitioning from a traditional maker of vehicles to a "mobility provider," offering everything from short-term rentals of bicycles (and now scooters), to shuttle buses running on crowdsourced routes, to (eventually) a variety of ways to use motor vehicles, including via a subscription service called Canvas. Ford Smart Mobility is the subsidiary that Ford created in 2016 to own and run these businesses.

Sunny Madra is a Ford Smart Mobility vice president. In a Medium post announcing the Spin acquisition, he said that Ford's plan is to offer a complete set of transportation options that includes -- and goes beyond -- Ford's traditional businesses.

Ford is focused on delivering great products and services across the mobility spectrum, seeking to enhance the freedom of movement by building smart vehicles for a smart, connected world. This means continuing to develop world-class vehicles, including more hybrids and battery-electric vehicles. It also means continuing development of self-driving vehicles, which we plan to launch at scale by 2021. Another critical component of our mobility strategy is to develop a comprehensive set of software and services designed to better enable vehicle connectivity and utilization, as well as new mobility experiences and multimodal transportation solutions.

By combining our strength in automotive research and development with our commitment to connected and autonomous vehicles and our emerging software business, we are expanding our portfolio of scalable mobility solutions intended to provide a seamless transportation experience for the modern consumer.

Expect more automakers to jump into the micro-mobility pool

Ford isn't the only automaker exploring micro-mobility businesses. General Motors (GM -0.60%) said last week that it will launch a new line of electrified bicycles next year, though it isn't yet clear whether GM plans to operate a rental business or sell the bicycles to others.

Clearly, for investors, it's a space to watch. As the idea of micro-mobility continues to get traction, expect more interest from automakers as well as traditional tech investors -- and more deals like this one.