Please ensure Javascript is enabled for purposes of website accessibility
Log In Help Join The Motley Fool
Free Article Join Over 1 Million Premium Members And Get More In-Depth Stock Guidance and Research
By Lou Whiteman - Nov 10, 2018 at 10:19AM

Canada is moving forward with a draft request for proposals for the country's highly anticipated fighter-jet replacement contract. Expect a fun competition, swayed by potential international intrigue and pitting aerospace giants including Lockheed Martin (LMT 0.83%), Boeing (BA 2.28%), Airbus, and BAE Systems against one other as they seek a prize worth at least $12 billion.

In a speech late last month, Carla Qualtrough, Canada's minister of Public Services and Procurement and Accessibility, called the draft release "an important milestone" in the country's plan to purchase 88 advanced fighter jets. Feedback on the draft is due by year's end, and Canada will seek bids by mid-2019 in hopes of awarding a contract in late 2021 and beginning deliveries in 2025.

Canada has listed five eligible bidders (and their respective aircraft) for the deal: the Lockheed Martin F-35, Boeing Super Hornet, Eurofighter Typhoon, Saab Gripen, and Dassault Aviation Rafale. Airbus and BAE are both members of the Eurofighter consortium, and Airbus also owns 9.9% of Dassault Aviation. 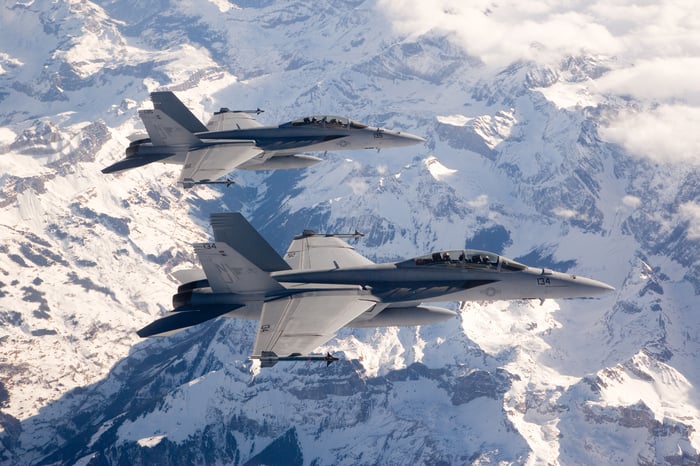 A year ago, the Super Hornet was a heavy favorite, but a lot has changed since. Here's a look at where the competition stands today.

The Super Hornet seemed a likely candidate because of its similarities to the jet to be replaced, the CF-18 Hornet. And the jet, though not as technically advanced as the F-35, is a powerful warfighter -- and at least at the time was significantly less expensive than the F-35. Canada's allies across the Atlantic will lobby hard for selection of one of the three European entrants, but given Canada's close relationship (and proximity) to the United States, its military has traditionally preferred to work with U.S. designs to aid in coordination with its neighbor.

But Boeing's chances took a hit last winter after the company launched a trade complaint accusing Canadian aerospace firm Bombardier of selling its CSeries passenger jet in the U.S. market at a drastically discounted price. The complaint was eventually thrown out, but not before Canada nixed a plan to buy 18 Boeing fighters to provide a bridge until the new contract could be awarded.

Canada instead said it would acquire a fleet of older F-18 Hornets from Australia.

Trade tensions between the two countries have since eased, and Boeing might still prevail in next year's competition. But if nothing else, the dispute sapped considerable momentum from Boeing's effort, and gave fresh life to a potential Lockheed Martin bid.

Canada is a founding member of the international coalition involved in designing the F-35, and was assumed to be an eventual customer. But current Prime Minister Justin Trudeau, while on the election trail in 2015, said his government would not buy the fighter because of its high cost. That began the process that has included buying an interim fleet of jets from Australia and holding a new competition next year to select a long-term replacement.

Lockheed Martin seems certain in its bid to highlight its work bringing down the unit cost on the F-35. It can also reference the more than $1 billion in billings that Canadian firms have received for work done on the F-35 program.

Canada could end up the big winner in the competition if both Boeing and Lockheed bid aggressively. Lockheed Martin is trying to maintain a dominance in the fighter jet arena that dates back to the early 1990s, with its F-22 win, and which continued when it beat out Boeing to produce the F-35. And although the F-35 order book is solid and the jet is well on its way to becoming a $1 trillion program for Lockheed and its suppliers, the company figures to be highly motivated to avoid the PR blow of having one of its founding coalition members reject the plane in favor of an older alternative.

Boeing, meanwhile, has shown it is willing to compete on price, giving the U.S. Navy a discount in 2017 on an order for 12 new Super Hornets.

Canada will buy American, but which American?

The wild card in the competition is U.S.-Canadian trade relations. As recently as this summer, when the U.S. negotiators were clashing with their Canadian counterparts over talks to rework NAFTA, the Trudeau administration was reportedly considering a plan to penalize fighter candidates from countries that inflict damage on the domestic economy.

Assuming no new trade war erupts, it's hard to imagine the Europeans winning this competition. Canada's ties to the United States military are important enough to make interoperability a priority. And alternatives -- including the Eurofighter -- have had issues competing against the U.S. jets even on their home territory, as evidenced by Belgium's recent decision to pick the F-35 over the Typhoon to replace its fleet of F-16s.

The Canadian deal would be important to either Boeing or Lockheed Martin for bragging rights and sales momentum, but both companies can survive a loss. The Super Hornet program, which was so low on orders in early 2016 that Boeing was considering self-funding production just to keep the line moving, today has commitments from the U.S. Navy as well as a number of international orders. And the F-35 program -- in addition to more than 2,000 expected orders from the United States -- has orders from about a dozen other countries, with forthcoming competitions in Germany, Switzerland, and elsewhere, where it will be the favored.

Boeing and Lockheed Martin have also enjoyed a steady stream of new defense business awards outside of fighters as well.

Investors can sleep easy owning either stock, though of the two, I prefer Lockheed Martin for new money right now. The Canadian fighter jet deal, whenever it is finally announced, is going to be a nice addition to someone's already-strong defense portfolio.