Please ensure Javascript is enabled for purposes of website accessibility
Log In Help Join The Motley Fool
Free Article Join Over 1 Million Premium Members And Get More In-Depth Stock Guidance and Research
By Dan Caplinger - Nov 14, 2018 at 6:02AM

Find out what's kept the drugstore chain from recovering.

Rite Aid (RAD -7.92%) has gone through monumental challenges over the past several years. Having been under threat as the No. 3 player in the drugstore retail industry, Rite Aid seemed to have reached a final solution to its difficulties by negotiating a merger deal with Walgreens Boots Alliance (WBA -7.27%) back in 2015. Only after years of delays and review did Rite Aid manage to get a severely scaled-back deal done with Walgreens in 2017, under which Walgreens took over more than 1,900 Rite Aid store locations for $4.4 billion.

Unfortunately, that left Rite Aid with the colossal task of figuring out how to handle a large amount of debt with a much smaller store base. Even as it tried to come up with a turnaround plan, Rite Aid also went back to its old playbook of trying to find a potential buyer. As it turned out, those plans worked out to be equally frustrating for Rite Aid shareholders, and the question now remains whether the drugstore chain can ever get back to its former glory. 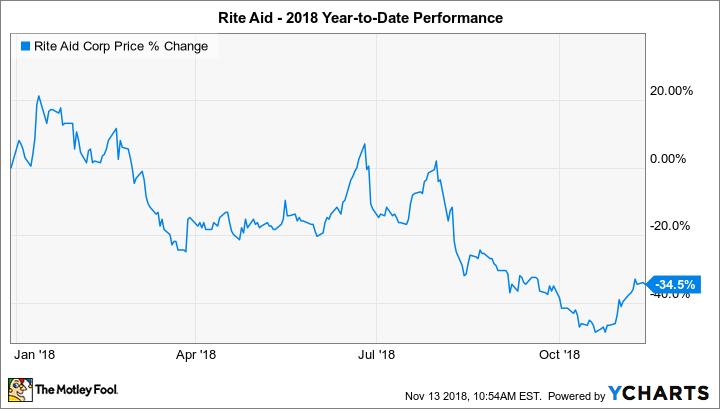 Rite Aid entered 2018 with a mission to continue to move forward with the provisions of the Walgreens deal. Under the asset sale's terms, Rite Aid was transferring stores gradually, earning parts of the overall purchase price along the way. Meanwhile, Rite Aid's strategy aimed at making the most of its remaining stores and using favorable provisions in the Walgreens deal letting it buy certain generic drugs at cost.

Yet it didn't take long for Rite Aid to do a repeat performance of its previous M&A strategy. The company said in February that privately held grocery store chain Albertson's would purchase Rite Aid, giving shareholders the choice to accept either cash or stock in the combined company.

At the time, those favoring the deal suggested that Albertson's might seek to use Rite Aid's extensive store network to give it more outlets and distribution nodes to sell products online. In addition to digital grocery offerings, Albertson's was looking at enrolling third-party vendors to sell a host of other types of products.

Yet even the prospect of a buyout didn't keep Rite Aid from responding negatively to the biggest competitive threat in the drugstore business. Amazon.com (AMZN -2.49%) said in June that it would move into the pharmacy services industry, and that sent shares of Rite Aid, Walgreens, and other drugstore operators plunging. With its acquisition of a company that packages multiple prescriptions for patients in easy-to-use shipments, Amazon signaled that it wanted to make moves that would potentially threaten Rite Aid's profit margin levels.

Another dose of bad news came in August, when news came out that Rite Aid and Albertson's wouldn't be merging after all. Opposition from institutional investors in Rite Aid centered on the fact that they'd be left with only 30% of the combined company, arguably giving the private equity acquirers too large a share of the company. Yet given that Rite Aid cut its guidance for the remainder of the year and that no other bid has thus far emerged, it's questionable whether opponents of the merger were right to fight it.

At this point, some have even started talking about the possibility that Rite Aid's debt burden might prove insurmountable. Interest expense has run at about a $220 million clip over the past 12 months, and although long-term debt of $3.5 billion is about half what it was a year ago, it's crept up gradually in the quarters since Rite Aid made its big debt payoff. The company does have several years before its next major debt repayment is due, but it still faces operational challenges that have put it in a negative free cash flow position.

Can Rite Aid bounce back?

2018 hasn't been kind to Rite Aid, and the drugstore chain doesn't have an obvious path to a brighter future. That's not to say that all hope is lost, but it does mean that Rite Aid will have to keep working hard to come up with a creative solution to reinvent itself as a successful business in a tough industry.