The popularity of Alta Motors' e-bikes hints that there's a market for a high-performance version. But that company is failing anyway, and Harley should take that as a warning.

Harley-Davidson (HOG -0.79%) unveiled the production-ready version of its new LiveWire electric motorcycle at the Milan motorcycle show last week. It's a sleek, racing-style bike that looks nothing like your traditional Harley cruiser or touring motorcycle, and it shows the bike maker is all-in on the electric market.

As terrific as the LiveWire looks (and that's coming from someone who has been critical of Harley's foray into the electric segment), caution is still warranted. Alta Motors, the electric dirt-bike manufacturer Harley invested in earlier this year, has reportedly shut down production and may be looking for a buyer.

Though Alta's sales rose 50% in consecutive quarters in 2018, building electric motorcycles is expensive, and the company was having difficulty getting financing. If a company that has achieved such impressive growth with a well-regarded line of electric motorcycles is having to close up shop, there's reason to question how easy Harley-Davidson's road to success in the segment will be. 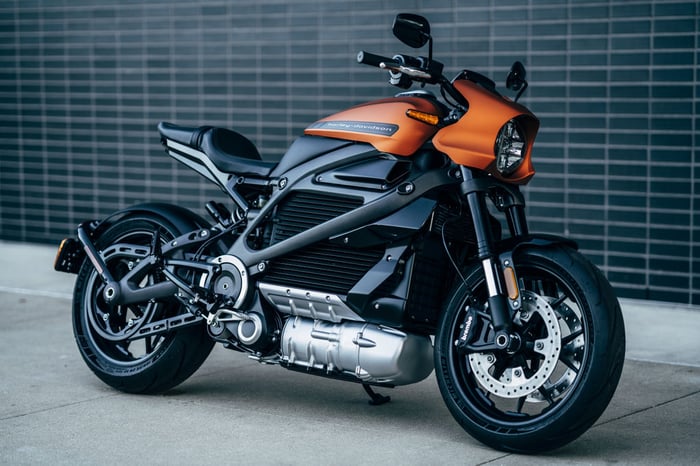 Harley hasn't revealed the specifications for the LiveWire -- it says more details will be forthcoming in January -- but it actually looks like a motorcycle people will want to buy and ride. It's much more impressive than the prototype unveiled four years ago. And though a lot depends on the bike's battery capacity, its riding range, recharge time, and (perhaps more importantly) the price, this could be an important model for the manufacturer, which lately has been unable to rev up sales of its big iron horses.

The LiveWire's appealing appearance notwithstanding, the bike maker will have to overcome some inherent hurdles to make a go of it in this arena.

First, there is virtually no existing market for a motorcycle like this. In the More Roads to Harley-Davidson strategic road map released in July, Harley said that fewer than 1,000 high performance e-bikes were sold across the U.S. and Europe in 2017. While there might not be many manufacturers, the real sweet spot in the broad category has been in the lightweight, urban style, where tens of millions of e-bikes have been sold.

Second, Harley lacks expertise in electric motorcycles, and while it invested in Alta, the two parted ways just a few months later. Instead of using Alta's infrastructure, as the smaller company had been hoping it would, Harley decided to open up its own e-bike research and development facility in Silicon Valley. Maybe it saw something it didn't like in Alta and decided to ride solo. But its heritage has been in gasoline, grease, and oil -- it might not have the same level of credibility among likely e-bike buyers.

Third, among the existing electric motorcycle companies, Zero Motorcycles is the leader. It's been building e-bikes for 13 years, and has broken through some important technology barriers, such as extending the range of its Zero S model to over 200 miles of city driving and more than 100 miles on the highway. When the LiveWire prototype was unveiled, it had a 55-mile range, and that was in economy mode. The production version will likely surpass that, but it will probably take a few years.

In Harley's favor, the apparent demise of Alta Motors is less of a harbinger of the veteran motorcycle maker's fate than it might appear at first glance. For one, Alta only made dirt bikes. Although it always hoped to apply its technology to all sorts of light-duty and recreational vehicles, it made its bet on a leading niche market, one where many riders get their first taste of motorcycling. Its financial struggles, however, limited its ability to get beyond those confines. Maybe Harley will buy Alta's intellectual property and snap up its engineers, since Alta is based just outside San Francisco, where Harley is building its R&D facility.

Harley-Davidson has a narrow road to success here. While it's the largest manufacturer of big, burly combustion-engine motorcycles -- the market for which may well be in a permanent decline -- it has a chance to accelerate into a whole new category with the LiveWire. And the popularity of Alta's dirt bikes could indicate that there's an audience for Harley's high-performance street bike.

Likewise, the success of Zero Motorcycles indicates potential. But the financial woes Alta experienced, despite its dramatic growth and the accolades its bikes earned, suggest Harley's electric drive could still be cut short.