Not so long ago, Ford Motor Company (NYSE:F) was an investor darling, with growing profits and a management team that seemed to have everything in hand. But that was then: Through Nov. 14, Ford's stock has fallen 23.6% so far in 2018. 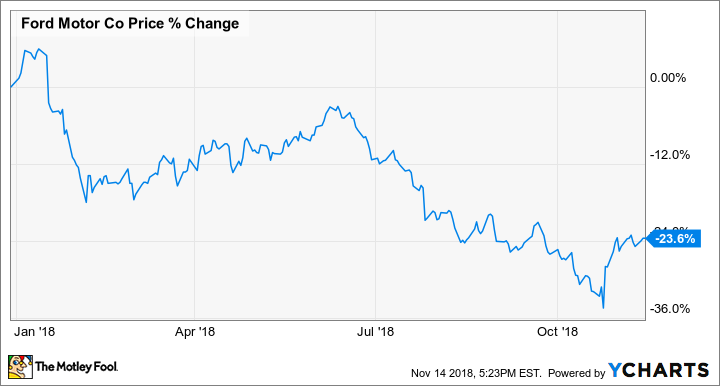 Why Ford's stock price is down: The simple answer

The easy answer is that stock prices tend to mirror investors' expectations about profits, and Ford's profits have fallen sharply in 2018. Note that this year's stock-price decline began in January, right after Ford gave its (pessimistic) profit guidance for the year.

Ford uses "adjusted EBIT" -- which is its earnings before interest and tax (EBIT) "adjusted" to remove the effects of one-time items -- as its key measure of the underlying performance of its business. 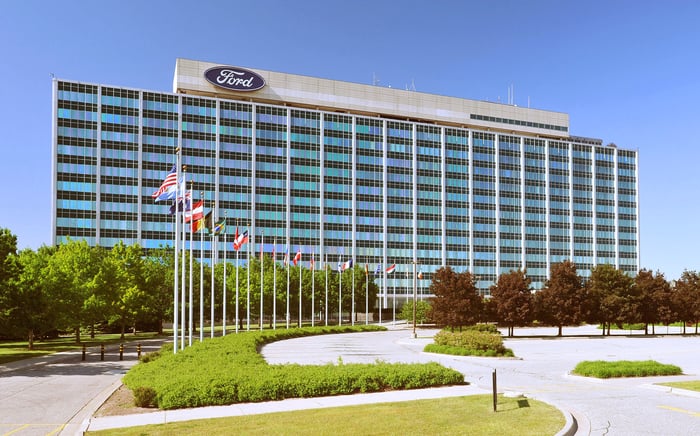 That performance hasn't been good in 2018. Ford's adjusted EBIT has been down from the year-ago period in every quarter so far this year: down 12% in the first quarter, down 39% in the second quarter, and down 26% in the third quarter.

Why Ford's profitability has fallen in 2018

There are a few factors that have weighed on Ford's profit margins over the last year-plus:

Higher prices for key commodities. Prices for steel and aluminum have been rising for a couple of years, a trend exacerbated (in the United States, at least) by tariffs imposed by the Trump administration. CEO Jim Hackett recently estimated that the Trump administration's tariffs on metals have added about $1 billion to Ford's costs so far in 2018.

Unfavorable exchange-rate movements. Thanks to Brexit, among other factors, the British pounds that Ford earns in Europe are worth fewer U.S. dollars than they were just a couple of years ago. They're also worth fewer euros than they were, which has complicated Ford's production. The U.K. is Ford's largest market in Europe, but most of the vehicles that Ford sells in the U.K. are built in Spain, Germany, and other European Union member nations.

More recently, currency devaluations in Brazil and Argentina, the two largest new-car markets in South America, have all but wiped out the gains that Ford had made in the region from restructuring its operations and revamping its product lineup.

Ford is working on revamping its operations in both Europe and South America to make them sustainably profitable, but it'll probably be a year or more before those efforts start to pay off.

Trouble in China. The world's largest new-vehicle market was a bright spot for Ford just a few years ago, and a steady source of profits. But over the last couple of years, Ford's sales in China have declined sharply, and its profits have swung to losses.

The problem? Just about all of the global automakers compete in China, as do a slew of domestic Chinese automakers that aren't well known in the U.S. Consumers nearly always have new products to consider, and an automaker that doesn't frequently update its product line will fall behind. That's what happened to Ford.

Again, Ford is already working to fix these issues. It has already reorganized its China operation, reworking its dealer-support network and bringing in a veteran Chinese auto executive to run the operation, and it has a slew of new products for China in development. But again, it will be at least a few quarters before these changes make a significant impact on Ford's bottom line.

The other factor: It's just a tough time to be an auto investor

There's another factor that is working against Ford's stock price: the economic cycle.

Automakers like Ford are cyclical companies. Auto sales fall during recessions and rise during recoveries. Because automakers have such high fixed costs, those recessionary sales declines can wipe out much of their profits -- or even push them to losses for a few quarters.

The current economic expansion has been underway since mid-2009, making it very old by historical standards. Ford's profits grew more or less steadily in the early years of the expansion, peaked in 2015, and have gradually slipped since. As you can see, Ford's stock price has been slipping since 2015 as well. 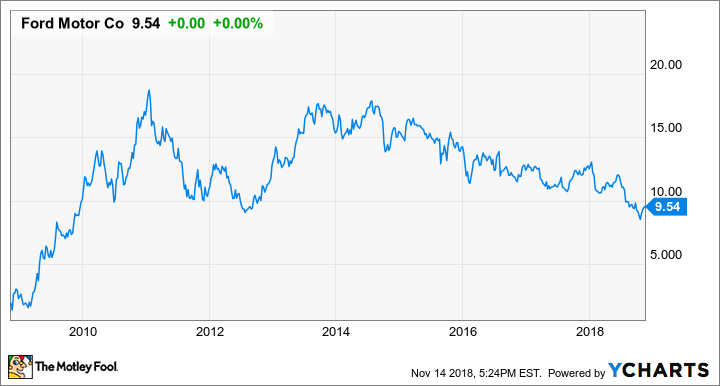 What will it take for Ford to recover?

Ford needs to make progress on its plan to boost margins, which includes the efforts I mentioned above. It also needs to show investors that it will remain a major player as new technologies (autonomous and electric vehicles) enter the mainstream.

But it's possible that investors won't flock to Ford's stock until the company shows that it can sail through a recession. In other words, Ford's stock may be stuck in neutral until the next economic recovery gets underway.

That's not entirely bad news for investors. At current prices, Ford's dividend is pretty rich (and unlikely to be cut in a downturn). Investors who reinvest the dividend while waiting for that recovery could be quite pleased with their total return a few years from now. But looking just at Ford's stock price, it's hard to get excited about the Blue Oval's near-term prospects.