Which of these two fast growers in the smarter choice for new money today?

Healthcare products remain in demand in good times and in bad. That's a big reason the sector is a great place for investors to hunt for stock ideas. 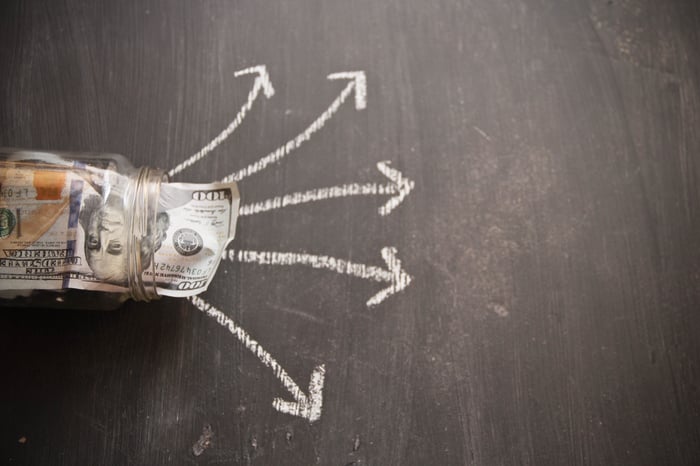 The case for EXACT Sciences

Colon cancer is easily treatable when it's caught early, but 50,000 Americans still die from the disease each year. Why? The primary reason is that adherence to the gold standard diagnostic method -- an invasive and expensive test called a colonoscopy -- is abysmal.

Exact Sciences is on a mission to change all of that with its innovative Cologuard test. Users simply deposit a stool sample in the box from the comfort of their own home and send the test in for analysis. Then the patient's doctor receives a full report within just a few days and determines the next steps.

The appeal of using Cologuard has lead to strong demand from patients, payers, and healthcare providers alike. Exact Sciences' revenue and stock price have risen rapidly in response.

Even with the prosperity, there's ample reason to believe that Exact Sciences' torrid growth rate can continue from here:

These factors explain why Exact Sciences' management team is calling for revenue to jump from an expected $435 million in 2018 to $700 million or so next year. With so many growth irons in the fire, it doesn't take a lot of imagination to believe that Exact Sciences' stunning growth rates will continue for the foreseeable future.

Offsetting that optimism is the fact that Exact Sciences is still burning through capital and currently trades for more than 21 times sales. Those facts might act as headwinds against future appreciation.

Illumina is the far-and-away leader in the genomic sequencing industry. The company boasts the most advanced technology that allows researchers to sequence a genome for a rock-bottom cost. The company's technological advantage has allowed it to hold a commanding market share for years. Best of all, the company employs a razor-and-blade business model that makes its financial statements highly reliable. These factors have worked together to mint long-term shareholders an absolute fortune.

Illumina continues to put up impressive numbers to this day. Sales expanded at a 19% pace in the most recent quarter thanks to the strength of consumable sales. Adjusted earnings grew by an even more impressive 37% thanks to favorable operating leverage.

But is this growth story played out? I think there's reason to believe that the opposite is true for a number of reasons:

With these things added together, Wall Street projects that Illumina's profits will grow in excess of 22% annually over the next five years. That's blazing-fast for a relatively mature business.

The only knock I see is that Illumina also trades for a nosebleed valuation. Shares are trading for more than 50 times next year's earnings estimates, so the prosperity might already be priced in.

There's an argument to be made that both of these companies deserve a spot in a growth investor's portfolio, but if forced to choose today, I'd happily go with Illumina. The company is at the top in an industry poised for rapid growth, and it gushes cash thanks to its razor-and-blade business model. That's a rare combination that any investor should find attractive.