The chairman of Nissan Motors (and CEO of Renault) was arrested in Japan on tax-related charges.

Nissan Motor Company Ltd. (NSANY -3.14%) said on Monday that it is preparing to fire its iconic chairman, Carlos Ghosn, for allegedly misusing corporate assets and underreporting his income. Ghosn was arrested in Japan on Monday on tax-related charges.

For watchers of (and investors in) the global auto industry, this is a huge, huge story. Ghosn isn't as well known in the United States as some of his peers, but he's widely considered to be a giant of the industry. And his downfall could have significant repercussions in Japan and in Europe. 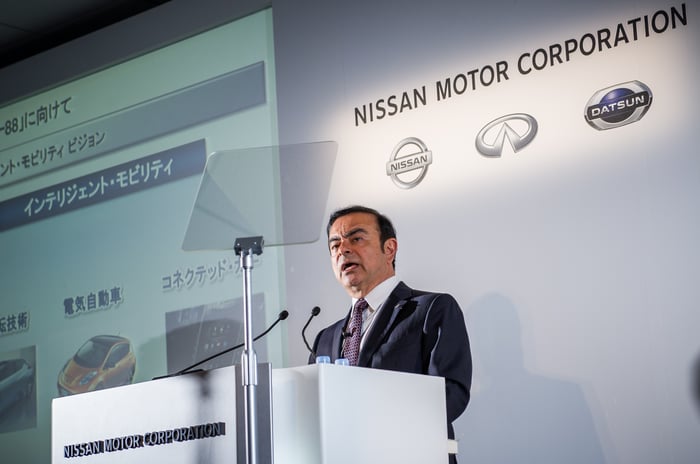 Carlos Ghosn was Nissan's CEO for years and is currently its chairman. But his successor said on Monday that he will move to fire Ghosn after an internal investigation uncovered "millions of dollars" in financial improprieties. Image source: Nissan Motor Company Ltd.

Who is Carlos Ghosn?

Ghosn was Nissan's CEO from 2001 until last year, when he was succeeded by Hiroto Saikawa. He is currently chairman of Nissan's board, a position he is likely to lose when the board meets on Thursday.

He is also the chairman and CEO (since 2005) of French automaker Renault SA (RNSDF 9.70%), which has a long-standing alliance with Nissan. And Ghosn is chairman of Mitsubishi Motors (MMTOF -10.08%), a role he assumed after Nissan acquired a controlling stake in that company (and added it to the alliance with Renault) in 2016.

Ghosn is credited with turning around Nissan, which was in considerable distress when he took over, and with pushing the alliance to make an aggressive move into battery-electric vehicles before most rivals.

More broadly, Ghosn is well regarded for driving down costs at both Nissan and Renault. But cost-cutting CEOs aren't always popular: Ghosn has been a target of criticism in Japan for his high pay, and he has a contentious relationship with French President Emmanuel Macron. (That's about more than just politics: The French government owns 15% of Renault.)

What are the allegations against Ghosn?

We don't know all the details yet. In a statement early on Monday, Nissan said that it began investigating Ghosn several months ago, after it received a "whistleblower report":

The investigation showed that over many years both Ghosn and [Greg Kelly, a Nissan director] have been reporting compensation amounts in the Tokyo Stock Exchange securities report that were less than the actual amount, in order to reduce the disclosed amount of Carlos Ghosn's compensation.

Also, in regards to Ghosn, numerous other significant acts of misconduct have been uncovered, such as personal use of company assets, and Kelly's deep involvement has also been confirmed.

Nissan has been providing information to the Japanese Public Prosecutor's Office and has been fully cooperating with their investigation. We will continue to do so.

In a press conference, Saikawa said that the allegations involve "millions of dollars" and include three major types of misconduct: underreporting income, using investment funds for personal gain, and illicit use of company expenses.

Saikawa confirmed that Ghosn was arrested and charged with at least one violation of Japan's Financial Instruments and Exchange Act after meeting with prosecutors on Monday.

Probably, but not yet. Renault's board (and the French government) are obviously watching developments closely, but both are awaiting more information before proceeding.

Renault's independent directors released a terse statement saying that they "acknowledged" Nissan's statement, and that they are awaiting further information from Ghosn. They also said that they remain dedicated "to the defense of Renault's interest in the Alliance [with Nissan and Mitsubishi]," and that Renault's board of directors will meet "very shortly."

Meanwhile, in a press conference in Brussels, Macron said it was too early to comment on the specific allegations. He added that the French government, as a Renault shareholder, "will be extremely vigilant to the stability of the alliance and the group."

What does this mean for investors in other automakers?

Simply put, there's now some level of instability at both Nissan and Renault, and in the long-standing alliance between the two. Beyond that, it's not yet clear.

But it seems like the kind of development that could lead to a reshuffling of the global automotive deck. The industry has been moving toward consolidation for years now. It's possible that other automakers -- or outside players, or both -- could see opportunities in the instability at (and between) Nissan and Renault.