Shares of LINE (NYSE:LN), the Japan-based chat app company, jumped 10.8% last month, according to data provided by S&P Global Market Intelligence, after the company said that it's in discussions with Mizuho Financial Group to establish a bank for its users.

On Nov. 27, LINE said in a press release that it's partnering with Mizuho Financial Group to set up a "preparatory company" that will plan and consider the establishment of a new bank" through subsidiaries of the two companies.

LINE's share price had been in negative territory in the days leading up to the announcement, then spiked on the news. 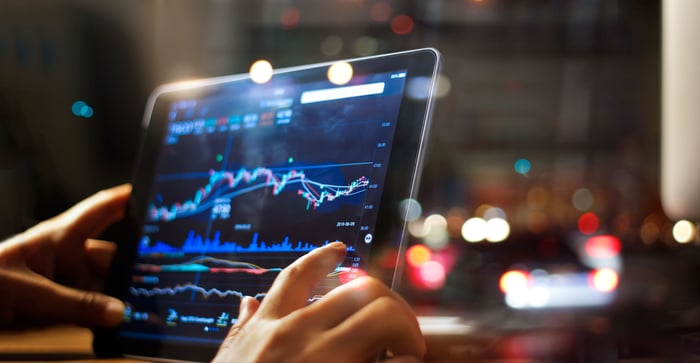 According to LINE, the partnership with Mizuho Bank will create a new, user-friendly "smartphone bank" for its 78 million monthly active users in Japan. The bank will need to pass regulatory approval before it launches and could be up and running by 2020. LINE's financial subsidiary, LINE Financial, will hold a 51% stake in the company and Mizuho Bank will hold 49%.

LINE also made a separate announcement the same day, saying that it's partnering with China-based Tencent Holdings, the maker of the popular WeChat app, to enable "foreign travelers to make payments at stores in Japan that accept LINE Pay." The partnership means that WeChat Pay users who are visiting Japan will be able to use their app at LINE Pay merchants starting in early 2016.

Investors were likely pleased to see LINE making bigger moves into mobile financial solutions as the company is trying to get users more engaged in its chat app.

Unfortunately, LINE's share price gains in November have been nearly all wiped out so far this month. Its share price slid 9% since the beginning of December, but the loss may have more to do with investor fears about the U.S. economy than with LINE's business. Investors are jittery about a possible trade war between China and the U.S. and are worried that a potential slowdown in the U.S. economy is just around the corner.