Brian Stoffel, Jamal Carnette, CFA, and Nicholas Rossolillo
(TMFCheesehead)
Author Bio
Brian Stoffel has been a Fool since 2008, and a financial journalist for The Motley Fool since 2010. He tends to follow the investment strategies of Fool co-founder David Gardner, looking for the most innovative companies driving positive change for the future. He also mixes in risk-management strategies he's learned from Nassim Nicholas Taleb. Follow @Brian_Stoffel_
Follow @Brian_Stoffel_

In theory, buying a growth stock and holding it for 50 years sounds straightforward. In reality, it's a white-knuckle experience: There are bound to be ups and downs, and you have to be willing to hold a 10-bagger and not lock in your gains day after day. Emotionally, it can be a minefield.

To help you identify growth stocks worth holding for that time frame, we asked three Motley Fool contributors to pick such a stock. Read below to find out why Amazon (NASDAQ:AMZN), Walmart (NYSE:WMT), and Shopify (NYSE:SHOP) all fit the bill. 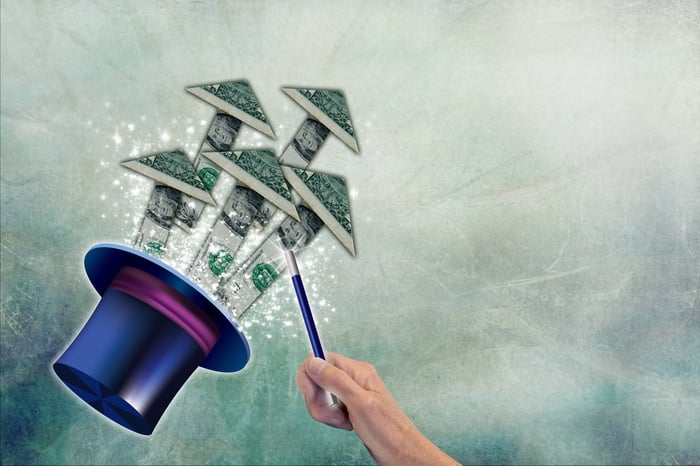 Jamal Carnette, CFA (Amazon): It's rare to find a company at the forefront of a business with a long runway for growth. Amazon, however, has three such businesses. While investors are well aware of Amazon's e-commerce operations -- in which it boasts a 50% U.S. market share -- with only 10% of all retail sales and Black Friday sales posting 24% yearly growth, e-commerce has a much longer growth trajectory than many investors think.

In-the-know investors understand that e-commerce isn't Amazon's true profit center. Instead, that is Amazon Web Services, the company's cloud-computing division. It is still posting strong growth rates and is now locking large enterprise clients into longer-term commitments, which will allow it to fend off challengers, most notably Microsoft's Azure, and continue to command this industry.

Fifty years is a long time, and it's likely each of these businesses will mature during this time frame. However, at some point, investors need to understand that Amazon's strong performance in three unrelated industries is a by-product of a culture that truly understands its core customer. That's less likely to change over the next half century.

Still the reigning king of retail

Nicholas Rossolillo (Walmart): I know what you're thinking: Walmart is not a growth company. Its days of fast expansion are well behind it, and the big-box store is facing a sea change in the retail industry brought about by the online shopping movement. While that has given the world's largest retailer headaches in the past, that doesn't mean Walmart isn't making hay off of the fast-growing digital economy.

Let's go back in time a few years. Many pundits were skeptical of Walmart's $3 billion purchase of Jet.com in 2016, and criticism mounted as the retail king went on a buying spree of other smaller digital shopping start-ups in 2017. The acquisition trail continued in 2018 -- most notably when Walmart took control of Flipkart, India's leading e-commerce platform. That price tag was a hefty $16 billion.

Walmart is throwing its weight around in other geographies, too. The company has partnerships with JD.com (NASDAQ:JD) and Tencent Holdings (OTC:TCEHY) in China's fast-developing digital marketplace. Then there was the quiet acquisition of Cornershop, a grocery delivery start-up in Latin America, helping Walmart strengthen its presence in its second-largest market after North America. 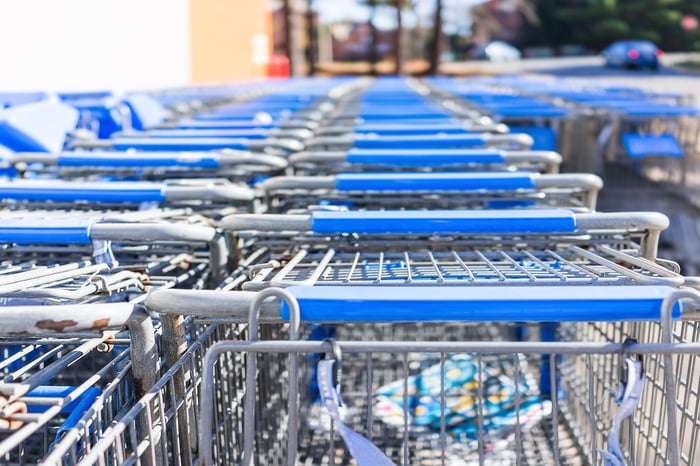 In short, though Walmart isn't showing much top-line growth, it has lots of irons in the fire, with the potential of big payoff down the road. Due in large part to all of those expensive investments, the bottom line has been under pressure; trailing price to earnings is at 55.5. There are signs of initial success, though. U.S. online retail sales were up 33%, 40%, and 43% in the first, second, and third quarters of 2018, respectively. That's proof that Walmart can keep pace with digital revolution and that the company can prosper for the long haul in the global retail industry. It may not be the most exciting company, but this is a stock with growth potential worth holding for the long term.

Catching the big fish before they're big

Brian Stoffel (Shopify): If a small or medium-sized business wants to set up an e-commerce presence -- and they'd be silly not to -- there's increasingly one place for them to go: Shopify. The company's platform not only helps you set up a website but also manages your social media accounts and can handle payments and deliveries -- all from the same spot.

Over the past three years, Shopify has proven its growth chops: Sales have jumped an average of 86% per year. That growth has been split between the company's two services: 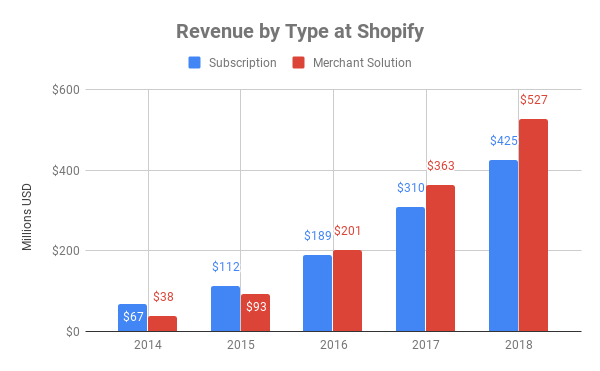 As you can see, these lower-margin solutions have been a major source of growth. Some have balked at this -- but I think it only adds to the company's moat.

Shopify adds thousands of merchants every year. Some of them will go bust -- this is the nature of small businesses. But those that survive will eventually move to the highest tiers of the subscription service, and the merchant solutions will contribute more and more. Shopify is in the business of catching black swans -- businesses that you don't expect to boom that do anyway.

And as those businesses grow, the switching costs of leaving Shopify will get higher. I expect that -- 50 years from now -- those forces will make this an excellent investment.