With the new year peeking over the horizon and uncertainty as to what the stock market will do next, investors might be wondering what the best course of action is heading into 2019. After a run that lasted more than nine years, bullish sentiment appears to be wavering, and concerns about rising interest rates, global debt, and international political dynamics are prompting a more cautious outlook.

There's no pinpointing what the broader market will do in the short term, and even though there are signs that bearish sentiment is increasing, attempting to time macroeconomic trends has historically proven to be an exercise in futility. Investors with a long time horizon will probably continue to be best served by seeking out great companies, steadily building positions, and avoiding intense preoccupation with the potential twists and turns of the broader market.

That said, it can also make sense to adapt your selection criteria in hopes of maximizing opportunities, and focusing on solid companies that have recently seen big sell-offs or otherwise lagged the market's momentum in recent years is one way to minimize downside risk while continuing to build a strong foundation of stocks for the long haul. With that in mind, here's why AT&T (NYSE:T), Walt Disney (NYSE:DIS), and Activision Blizzard (NASDAQ:ATVI) are top companies to buy this month. 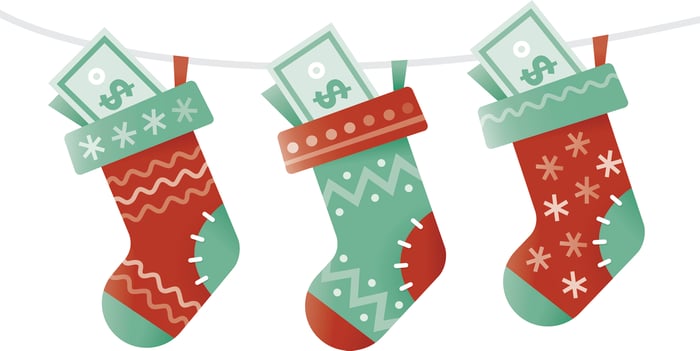 For investors who are concerned that the market could be due for a more prolonged trek into bearish territory, AT&T stands out as a top defensive stock. Shares yield a whopping 6.5% and trade at roughly 8.5 times this year's expected earnings. The company has also raised its dividend annually for 33 years running and has its payout well covered in terms of both earnings and free cash flow. Management's focus on paying down the debt load and the company's recent $85 billion acquisition of Time Warner suggest that dividend growth will probably be slow over the next decade, but the stock already packs a big yield, and investors can look forward to small but steady increases each year.

AT&T isn't immune to shifts in broader market sentiment, but its hefty dividend should provide some insulation against negative pressure, and its current valuation already assumes a low-growth outlook, so shares are likely to be relatively resilient amid a bearish backdrop. The stock has climbed less than 10% over the last decade while the S&P 500 has more than tripled across the stretch, and shares are priced at a six-year low that looks historically cheap in relation to earnings.

Much of the telecom giant's soggy stock performance is attributable to declining subscribers for its DirecTV satellite television business and a highly competitive environment in the mobile service space, but the company has a solid business foundation to work with even as its core segments are facing pressure. The acquisition of Time Warner gives the company a new media pillar to lean on and opens up new bundling and advertising opportunities, and AT&T's strong position in the mobile service space has it positioned to be a big player in big tech trends like the Internet of Things and 5G. It's not hard to see why the stock hasn't been popular in recent years, but AT&T looks like a worthwhile buy this December.

The House of Mouse's film slate for 2019 is absolutely massive, with two new movies in the record-breaking Marvel Cinematic Universe set to launch as well as a new mainline Star Wars entry, Toy Story 4, Frozen 2, live-action reimaginings of both Aladdin and The Lion King, and other big films positioning the company to dominate the box office. Ticket sales aren't Disney's biggest revenue or earnings driver, and building a long-term investment thesis solely on the strength of one year's film release slate wouldn't make much sense. However, this incredible lineup does say some things about the company's business model and wealth of franchises that highlight why it's worth establishing or building on a position in Disney stock.

The Mouse's position in the entertainment space looks stronger than ever, and its large and growing collection of blockbuster properties will likely continue to bolster its thriving theme park business and drive lucrative merchandising partnerships. That's true even as the company's television business faces pressure from cord-cutting and rising content costs.

Disney's push into over-the-top streaming has a good chance of being successful. Backed by the most powerful collection of franchises, characters, and stories in the entertainment industry and soon to absorb film and television properties from Twenty-First Century Fox, the company has enough in-demand content to make a strong debut in streaming next year and enjoy substantial growth in the years to come. The cable business will likely continue to see negative pressure, but Disney's strong position in entertainment content should give it the opportunity to pair its narrative-based streaming package with more robust, streaming versions of ESPN and Hulu -- the latter of which it will own 60% after closing the Fox deal.

Disney stock is valued at a reasonable 15.5 times this year's expected earnings and is down 2% over the last three years compared to a 35% increase for the S&P 500. With long-term growth potential and a growing dividend, that's a valuation that has the potential to deliver strong returns for long-term shareholders.

Activision Blizzard stock has taken a beating over the last couple of months, falling roughly 45% from the pricing high it reached at the beginning of October. It hasn't been the only big game company to see shaken investor confidence this year, with rival publisher Electronic Arts also down roughly 20% on the year and off more than 45% from its lifetime high. Investors appear to be taking a more cautious position on the growth outlook for the sale of in-game items and the overall gaming industry, and Activision Blizzard has been dinged for the negative response to its upcoming mobile installment in the Diablo franchise and some uninspiring third-quarter results.

The company's player base has been slipping as some of its key franchises age and casual players migrate away from mobile games published by its King Digital division, but average engagement per player actually looks to be rising, and its long-term outlook in the video game industry does not appear to have been derailed. It's rare that video game series see the level of longevity that Activision Blizzard games like World of Warcraft and Hearthstone have, and it seems some investors are overreacting to some slowdown for those properties. The video game industry is on track for big growth in the coming decades, and the company's strong collection of franchise properties and top-notch development studios should help it maintain a leadership position and take advantage of an expanding global audience as well as emerging opportunities like esports and mixed reality.

For patient investors willing to weather some volatility, Activision Blizzard looks like the best buy in the video game space right now. Shares trade at roughly 18 times this year's expected earnings, a valuation that looks appealing in light of the company's very strong long-term growth prospects.