These defense stocks are starting to look tempting.

Defense stocks have significantly outperformed the market over the past few years, in part because of high government spending levels. However, after riding high for many years, defense stocks hit some turbulence in the past month because of market volatility, and now some former highfliers are starting to come back to earth. That makes now a good time for investors to put some defense stocks on their watchlists.

Three names that stand out as being watchlist-worthy are AeroVironment (AVAV 3.47%), Heico (HEI 2.75%), and Oshkosh (OSK 1.88%), which are all down double-digits from their highs for the year. Here's why these Fool.com contributors think investors should take a closer look at this defense stock trio. 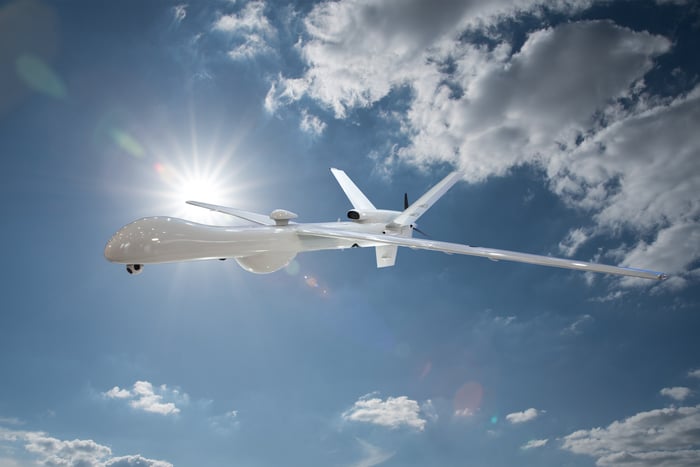 Keep an eye on the valuation

Matt DiLallo (AeroVironment): Drone-maker AeroVironment had been red hot this year, rocketing more than 100% by late September, driven by rising revenue and profitability. However, shares have lost altitude in the past couple of months because of a sell-off in the stock market and the company's poorly received fiscal second-quarter results, in which revenue came in lighter than hoped, which cut into margins. That recent turbulence makes it an interesting company to put on your defense-stock watchlist this month.

Despite posting mixed numbers during its fiscal second quarter, AeroVironment is off to a stronger-than-expected start to its fiscal year. The company now expects full-year revenue of $300 million to $310 million, which is in the top half of its guidance range. Earnings, meanwhile, should come in between $1.30 to $1.50 per share, at the upper end of its $1.10-to-$1.40 range for fiscal 2019. That forecast implies hefty profit growth for a company that earned $0.95 per share in fiscal 2018.

However, with the stock selling for around $70 per share after its downdraft, it's still expensive at more than 50 times earnings even if it hits the high end of its forecast. That's why investors should keep an eye on this defense stock and see if it descends to a more reasonable level before they consider buying.

The company behind the scenes

Travis Hoium (Heico): Heico may not be the first company you think of when the defense business comes up, but maybe it should be. It's a key piece of the defense supply chain, making critical parts for engines and weapons systems, and replacement parts as well.

What Heico has done incredibly well is acquire adjacent businesses and then fold them into existing operations, driving long-term growth. Over the past decade, the company has more than doubled revenue and increased net income at a far faster rate, driving an industry-leading return on equity. 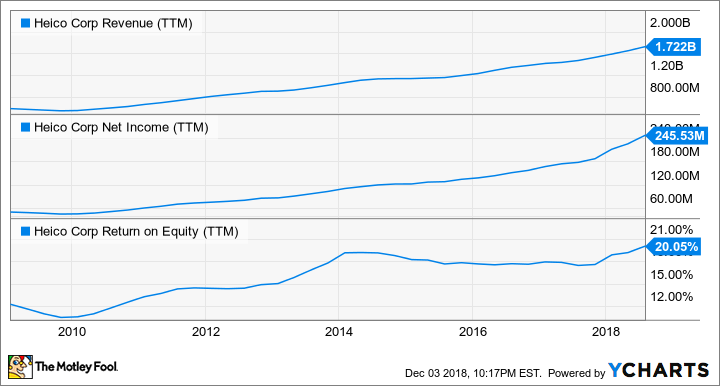 Being a supplier in the military and aviation market is difficult, with a lot of regulatory hoops and long lead time projects that can be frustrating for companies to deal with. But once you're in the system, it can be highly profitable, which Heico has proved over time.

Heico is never going to be a high-growth stock, but it's a great performer because management has been able to edge margins higher and acquire adjacent businesses with attractive returns. Given that business profile, this is a stock I would be bullish on for many years to come.

This year's business at 2016 prices

John Bromels (Oshkosh): Specialty truckmaker Oshkosh isn't your usual defense industry stock. While it does what many defense contractors do -- manufacture specialty military equipment for the U.S. Department of Defense and sometimes foreign purchasers -- defense equipment makes up only 23.7% of Oshkosh's revenue.

About half of Oshkosh's sales, on the other hand, are from its access equipment division, which makes telehandlers (think forklifts on steroids), aerial work platforms, and other construction and maintenance equipment. The rest of Oshkosh's money comes from sales of cement mixers, fire trucks, garbage trucks, and other specialty vehicles.

That's good for investors, because it means Oshkosh's future isn't entirely dependent on whether it gets that juicy military contract. In fact, in Oshkosh's most recent quarter, it didn't book any international sales of its Mine Resistant Ambush Protected-All Terrain Vehicle, causing sales in its defense unit to drop 22.2%. But because Oshkosh's other divisions performed so well, net income was still up 61.8% year over year.

Oshkosh's share price has slid during 2018 as investor concerns about higher steel prices and the lack of a federal infrastructure spending package weighed on the stock. In fact, shares are now trading at about the same level they were two years ago. With increased federal infrastructure spending again emerging as a possibility, and Oshkosh projecting an jump in earnings per share of between 3.3% and 15.3% next year, this is a defense stock to keep an eye on this month.