While shares of AeroVironment (NASDAQ:AVAV), a leading manufacturer of drones for both defense and commercial applications, nearly doubled through the first nine months of 2018, the last two months have been much less auspicious. Encountering considerably more turbulence, the stock fell almost 20% in October and another 18% in November, according to data from S&P Global Market Intelligence. The primary culprit for the wave of pessimism last month was the company's release of its Q2 2019 earnings.

There were several causes for celebration to be found in AeroVironment's recently released earnings report. For example, the company reported strong growth on the top line, booking sales of $72.9 million, which represents an 11% year-over-year increase. Positive news was also found on the bottom line as the company reported earnings per share from continuing operations of $0.29, crushing analysts' expectations of $0.16. And providing a hopeful outlook for the balance of fiscal 2019, management raised its revenue guidance, stating its expectation that it will now generate $300 million to $310 million in revenue from continuing operations as opposed to the previous guidance of $290 to $310 million. 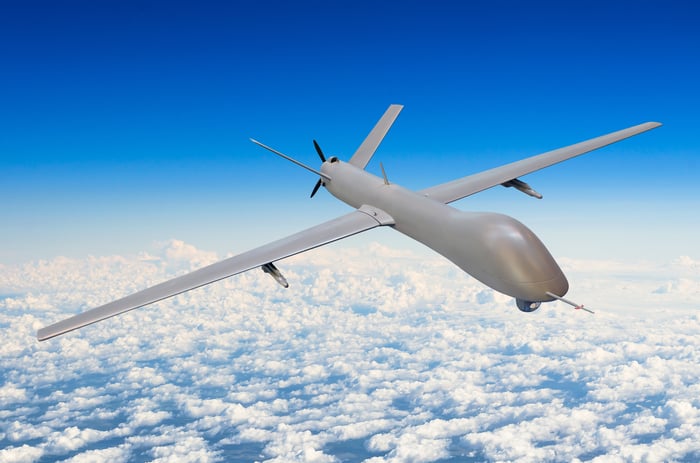 Another source of consternation for investors was found on the company's cash flow statement, where the company reported negative operational cash flow from continuing operations of $2.38 million in Q2 2019, a sharp downturn from the positive $4.68 million that it reported during the same period last year. Taken in concert with the company's first-quarter performance, the cash flow woes become even more glaring. Through the past two quarters, AeroVironment has generated $2.66 million in operational cash flow from continuing operations, representing a staggering 91% drop from the same period last year.

Although the sell-off in AeroVironment's stock may seem disconcerting, investors should hardly interpret this as a red flag indicating that there is immediate cause for alarm. According to management, growth lies on the horizon, and in the months ahead investors should watch to see if AeroVironment remains on track to achieve the company's upwardly revised revenue forecast of $300 million to $310 million. More importantly, however, they should monitor the company's gross and operating margins to see if they continue to contract, or if the company is able to reverse course and expand them.