Please ensure Javascript is enabled for purposes of website accessibility
Free Article Join Over 1 Million Premium Members And Get More In-Depth Stock Guidance and Research
By Rich Smith - Dec 11, 2018 at 10:28AM

Kratos Defense & Security ( KTOS -1.93% ) stockholders have been taken on a wild ride these past couple of months. After losing nearly 20% of their value during the tech rout in October, shares soared more than 20% in the first week of November alone after it was reported that the U.S. military is running test flights for drone-on-drone aerial combat.

Last week, Kratos stock enjoyed another 7% spike after Dealreporter highlighted speculation that someone (or someones) in the defense industry might be moving to acquire Kratos and its burgeoning drones business.

That news prompted analysts at Canaccord Genuity to reiterate a price target of $16 on buy-rated Kratos Friday. This week, TheFly.com is reporting that analysts at Goldman Sachs have raised their rating on Kratos stock to buy -- with a $20 price target. 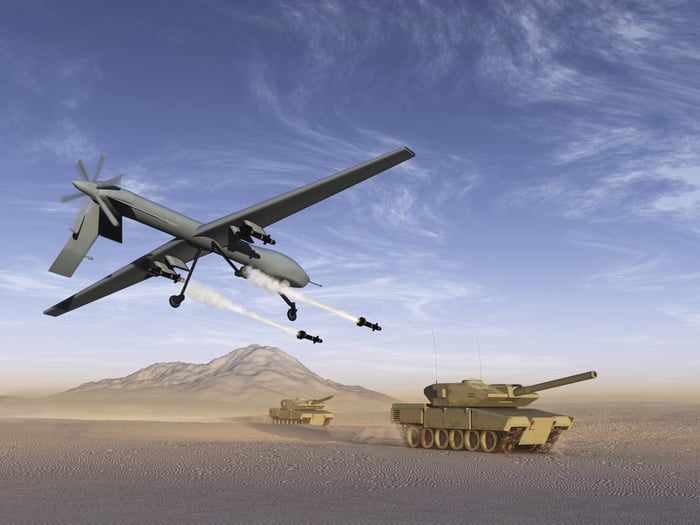 For those not familiar with the company, a brief review may be in order.

Kratos is a small defense company operating in two main lines of business. The company's flagship government solutions division specializes in electronics and satellite communication services, and provides most of its revenue (about $480 million over the past 12 months, according to data from S&P Global Market Intelligence) and profits ($10 million, pre-tax). It's a steady business, but not particularly high growth, with sales actually falling a fraction of 1% over the last year.

Kratos's other business, however -- drones -- is a bit more exciting. Kratos makes two main kinds of drones: target drones for the military to practice shooting at, but also several new types of jet-powered combat drones, that the company believes will one day be capable of doing their own shooting.

This is the growth driver at Kratos, with sales growing 32% over the past year (to $139 million) and profits of more than $6 million.

What Goldman Sachs likes about Kratos

In its note upgrading the company, Goldman Sachs predicts this growth will continue, and even accelerate, in years to come. Indeed, Goldman goes so far as to predict that by 2025, the company's "unmanned" division "could be 10 times today's size."

If this is correct, even assuming no growth in what is today Kratos' biggest division (government solutions), then six years from now, unmanned systems could be pulling down $1.4 billion in annual sales, or roughly twice today's sales for the entire company.

In fact, though, the rest of Kratos probably will grow quite a bit, because as Goldman points out, drones may be the sexiest part of the company's business, but it's not the only part growing. Indeed, Goldman sees a "long list of new growth programs" at Kratos in addition to drones. These might include, for example, the $29 million contract that Kratos was awarded last month to develop "prototype technologies, components and subsystems for the enhancement of existing or new Directed Energy (DE) systems" (i.e., laser cannons) under the U.S. Army's "Counter Rocket, Artillery and Mortar (C-RAM), Counter Unmanned aircraft systems (C-UAS), and/or Counter Intel, Surveillance, Reconnaissance (C-ISR)" programs. Kratos was also recently identified as the cybersecurity manager of data transfer and routing operations for Amazon.com's new AWS Ground Station.

Tallying up all the ways it sees for Kratos to grow, Goldman Sachs suggests a 20% revenue growth rate through 2020 is not out of the question for the company. Farther out, the analyst thinks Kratos could continue growing at a double-digit rate "through the middle of the next decade."

There is, however, some question about precisely what profits Goldman Sachs sees Kratos producing from this revenue surge. Although profitable on an operating basis, Kratos still hasn't managed to report positive net earnings since 2015, nor positive free cash flow since 2013. Like Goldman, I feel optimistic about the company's prospects -- but even so, I admit that I find it hard to assign a value to Kratos stock without positive earnings, or at least a positive free cash flow number, to work from.

Here's hoping that when Kratos Defense & Security reports its next round of earnings news a couple months from now, the company will be able to show not just an ability to win contracts -- but to profit from them as well.