The stock of El Pollo Loco Holdings (NASDAQ:LOCO) -- the restaurant chain specializing in citrus-marinated, flame-grilled chicken -- reached its highest point in four years after releasing fiscal third-quarter 2018 earnings in early November. While shares have since returned some of their gains as the broader market has buckled, they've still appreciated nearly 55% thus far in 2018.

I've written previously this year about the company's efforts to stabilize operations and reverse its fortunes. Let's see whether this California-based fast-casual enterprise can enjoy further momentum in its stock in the coming months.

While El Pollo Loco has been in turnaround mode for most of 2018, its most recent earnings report revealed hints of sustainable expansion. Third-quarter revenue jumped nearly 11% year over year to $112.2 million. Even after adjusting for $5.5 million of franchise advertising-fund contributions (which a new accounting standard reclassified as revenue), the company's top line still jumped 5.5%. Systemwide comparable-location sales rose by 2.6% against the third quarter of 2017. Though modest, this is a palpable improvement over the flattish comps of the past several quarters.

Total systemwide comps were driven by a 2% increase at company-operated restaurants and a 3% increase at franchised locations. Management doesn't provide detail on franchisee comps, but it did break down the 2% improvement in company-owned stores. This included a 2.7% increase in the average guest check and a dip in transactions of 0.7%. In other words, a moderate decrease in traffic was offset by a higher average spend per transaction.

That larger average ticket size was well received by investors, as it validates management's decision during the year to avoid the value-menu discounting tactics of quick-service chains and even some fast-casual restaurant competitors.

Instead, the company has emphasized new limited-time offerings (LTOs) centered around $5 promotional combos. Management cited the company's Overstuffed Quesadillas LTO as an example of an item that reinvigorated traffic without hurting margins in the third quarter. 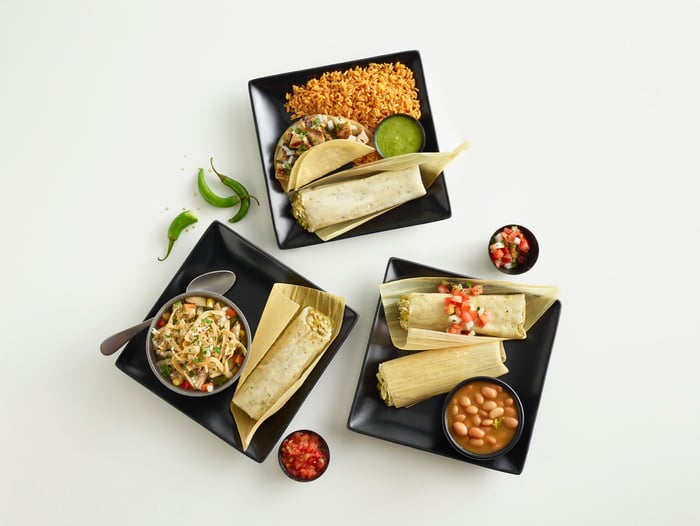 For its stock price to continue to move higher next year, El Pollo Loco will have to reveal a convincing but realistic projection of new store additions for fiscal 2019 when the company next reports earnings in early February. The company is on pace to open 17 or 18 stores in the current fiscal year, split roughly evenly between company-owned and franchised locations.

Acoca has relied on the preliminary results of a brand study showing that 50% of the company's customer base is Hispanic, and that it tends to perform well with families (30% of its daily sales are family meals).

On Loco's third-quarter earnings conference call, Acoca said: "Guided by the segmentation work, we took near-term actions to increase our mix of Hispanic advertising. We also included more 30-second TV ads to allow us to better tell our story and communicate our brand attributes, and we adjusted our marketing calendar to include more-relevant and compelling promotions."

An embrace of the company's Hispanic roots extends to new store openings. El Pollo Loco's latest opening, on Dec. 6 in Eastvale, is the company's 29th location in Southern California's Riverside County, which has a Hispanic population of nearly 49%.

Management is exploring ways to quickly push restaurant-level profits up within the next few quarters. In a project reminiscent of transformations completed in quick-service chains McDonald's and Dunkin' Brands, El Pollo Loco has begun testing a simplified menu in Houston, Dallas, and Los Angeles locations. Should the company implement a more streamlined menu within its entire system, removing preparation-intensive but low-value offenders, throughput is likely to improve. Faster throughput increases sales and lifts margins; it's possible that this initiative, if scaled, could provide the 2 to 3 percentage points of restaurant margin investors will look for in the coming year.

As El Pollo Loco stock has appreciated this year, its forward P/E ratio has scaled from a modest 13 (as recently as this spring) to near 21.5. Yet that's still slightly cheaper than McDonald's and Dunkin' Brands' current forward P/E ratios of 24 and 25, respectively, and well below high-flying fast-casual peers Chipotle Mexican Grill and The Habit Restaurants, which sport forward P/E's of 55 and 86, respectively.

El Pollo Loco's price-to-earnings-growth (PEG) presently sits at a ratio of 0.89, indicating that it's slightly undervalued versus its forward earnings potential. It's possible that rapid improvement in the overarching themes discussed above -- store expansion, comps growth, and margin improvement -- will unleash latent earnings potential in 2019. While El Pollo Loco has soared this year, sharper fundamentals next year could well support its continued ascent.