sell products through interactive Live videos. Sellers promote their products in a similar manner as a TV shopping network, but they can respond to shoppers' questions in real time. Buyers capture screenshots of the products they want to buy and send them to the seller via Messenger, and the seller requests a payment from inside the app. Facebook is only testing this peer-to-peer shopping service in Thailand, but it could eventually expand to other markets, where it might become an innovative addition to its Portal devices. 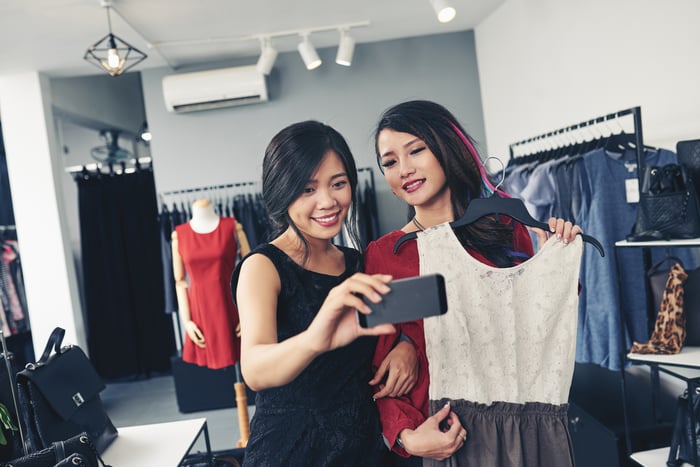 At first glance, this seems like an innovative way for Facebook to expand its fledgling e-commerce ecosystem, which includes the Facebook Marketplace for peer-to-peer transactions, shoppable Instagram posts, and pop-up stores for some of its digitally native businesses. However, it also clearly copies some core ideas from Mogu (NYSE:MOGU), a Chinese live video shopping platform that went public in early December.

Facebook failed to disrupt the e-commerce market for two reasons: Its platform was mainly associated with sharing photos, videos, and status updates, and most shoppers started their product searches on Amazon.

However, Facebook still believes that it can squeeze itself into some e-commerce niches with "social shopping" experiences that merge social networks and shopping platforms. That's why Facebook's Live video shopping network looks a lot like Mogu's core platform, which lets social media influencers sell fashion products through live videos.

Mogu also runs a "mini program" inside Tencent's (OTC:TCEHY) WeChat, the top mobile messaging app in China, which tethers more social media users to its e-commerce ecosystem. Facebook's expansion of Messenger into a platform -- which now includes in-app payments, games, and other services -- was also clearly influenced by Tencent's expansion of WeChat into a prisoner-taking "super app".

Mogu isn't an e-commerce heavyweight in China, but it has gained a loyal audience of younger female shoppers with an army of over 48,000 fashion influencers. Its average mobile monthly active users (MAUs) rose 28% to 65.2 million in fiscal 2018, and its active buyers climbed 35% to 24.4 million. Facebook likely hopes that its Live video shopping experiment yields similar results. 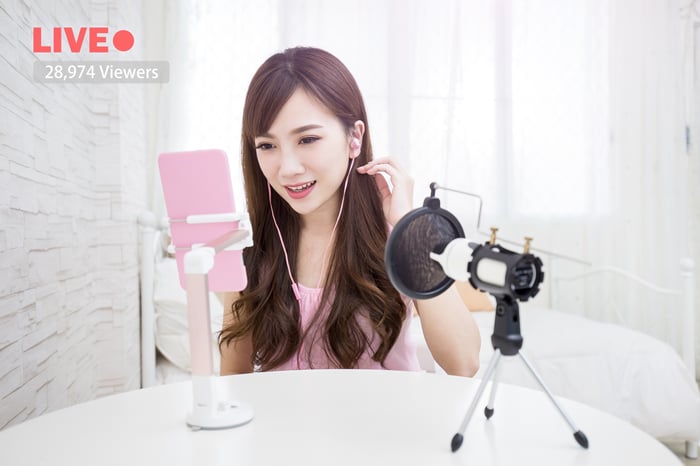 Amazon recognizes Facebook's disruptive potential in the "social shopping" market. That's why it recently launched a new feature for Snap's (NYSE:SNAP) Snapchat that lets users shop for products by simply taking a picture of a product or scanning its barcode.

Snap is only testing out the feature for a small batch of US users, but it could eventually help Amazon counter Facebook's investments in Instagram's e-commerce system, since Snapchat remains Instagram's primary rival among younger users.

Amazon is also pursuing Facebook in the advertising market by selling display ads across its e-commerce network, other websites, and hardware devices. The rapid growth of that business should make Amazon the third largest online ad platform in America this year, according to eMarketer, as it claims 4.1% of the market. That's much lower than Facebook's projected share of 20.6%, but Amazon's rapid transformation into an advertising rival remains a major headwind for Facebook. Therefore, Facebook's moves into the e-commerce market could be considered both offensive and defensive moves against Amazon.

When an innovator becomes a follower...

Facebook's growth is decelerating as it faces a seemingly endless series of questions about privacy, security, and management ethics. Therefore, the company clearly needs to find fresh ways to generate growth.

However, most of Facebook's new efforts -- including Instagram's addition of Snapchat-like features, Messenger's evolution into a platform, the launch of Facebook Watch, the introduction of smart speakers, and new Live video shopping features -- all merely clone existing ideas. It could be argued that Facebook is becoming a follower that merely chases hot trends instead of launching them.