Some of Netflix's (NASDAQ:NFLX) most valuable content is licensed from other media companies. For example, the streaming video company agreed to pay $100 million to AT&T's (NYSE:T) WarnerMedia for the rights to stream Friends in 2019.

Meanwhile, AT&T has discussed plans to launch its own WarnerMedia-branded direct-to-consumer streaming service at the end of next year. Disney (NYSE:DIS) will launch its own service around the same time after completing its acquisition of Fox (NASDAQ:FOXA), and Comcast (NASDAQ:CMCSA) management said it will eventually launch an NBCUniversal direct-to-consumer service.

The four media companies account for about 20% of content hours for Netflix's U.S. service, according to data from Ampere Analysis reported by Recode. That content could generate more than 20% of watchtime on Netflix, as evidenced by Netflix's willingness to pay $100 million for a 15-year-old show. So, Netflix may have a considerable challenge on its hands if it loses content from those media companies. 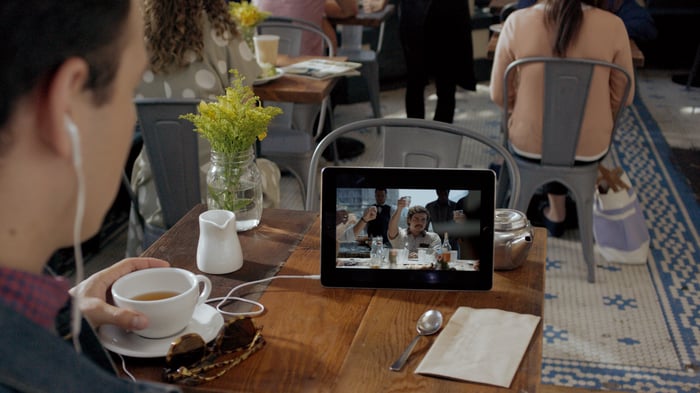 Netflix content chief Ted Sarandos there are three ways its content generates value. Content can either be so good it gets people to sign up for Netflix; it can be good enough to keep them signed up; or content can attract attention to the service in other ways through things like awards.

Shows like Friends from WarnerMedia, The Office from NBCUniversal, and basically any film produced by Disney tick the box on the first two value creators. People will sign up for a service just to watch reruns of their favorite show or have access to Disney's film catalog. (The latter is the entire premise of Disney's decision to go direct-to-consumer.) An even larger group of people will watch those shows or films as a supplement to the other top-quality content on Netflix, helping retain them as subscribers.

The broad appeal of some content like Friends combined with Netflix's massive scale makes that content much more valuable to Netflix than it is to smaller competitors. As such, Netflix is willing to pay a lot of money for very specific pieces of content.

An offer they can't refuse

Netflix's checkbook may be all too appealing to AT&T and WarnerMedia. It would be difficult for that company to generate $100 million in value from a single series in one year by retaining the streaming rights exclusively for itself. Even then, there's nothing guaranteed, and the company would have to work for subscribers; Netflix is offering $100 million -- no work necessary.

Disney CEO Bob Iger has already warned investors that taking content off Netflix will negatively impact its top line in the short term. And Netflix is making it hard for other media companies to take the same short-term hit for potential long-term gains.

That could mean Netflix's content library will become even more concentrated as Netflix pays outsized amounts to retain certain rights from WarnerMedia, Comcast, and other media companies considering offering content directly to consumers. On the other side of the coin, investors may simply see Netflix's content budget continue to balloon as the cost of retaining valuable content increases. Most likely, Netflix will only have the opportunity to retain some of its most valuable licensed content, which will keep its licensed content budget relatively stable.

The growth in the content budget is going toward new original productions. While Netflix has a goal for 50% of its content to be originals, original productions and co-productions currently account for just 8% of its content hours for the U.S. service. That number will continue to grow over time as more media companies retain their own content and Netflix produces more originals, but originals are still a long way away from accounting for the majority of content (or even watch time) on Netflix. The growth in new originals could continue to accelerate into 2020 as Netflix loses the rights to some of its top licensed content.