Hint: Apple TV can't keep pace with its rivals, and service revenue is the company's future.

This week, Samsung (NASDAQOTH: SSNLF) said that its 2019 smart TVs would come with the ability to buy and rent movies and television shows from Apple's (AAPL 1.62%) iTunes, as well as stream previous content purchased on iTunes.

This may not appear to be big news. But Apple investors should note two key things from the latest partnership between the rivals: The first is that Apple is essentially acknowledging that its Apple TV box can't keep pace with its competitors. And second, Apple is dead serious about being a services company. 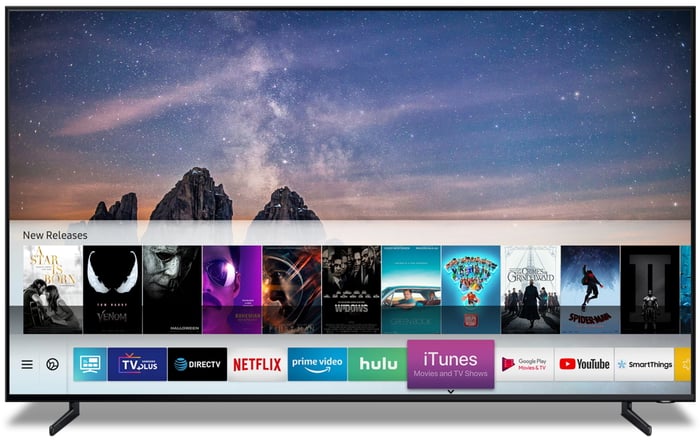 Takeaway 1: Apple knows it's losing in the streaming device game

Apple trails Roku (ROKU 2.15%) and Amazon (AMZN 3.15%) in the streaming device market, with Roku far ahead of everyone else at 37% and Amazon taking 28%, according to the latest data (from the first quarter 2018) from Parks Associates, an Internet of Things market research firm. Meanwhile, Apple holds just 15% of the market.

Roku has seen significant growth in the most recent quarter, with user accounts on its platform jumping 43% to 23.8 million and users spending 6.2 billion hours streaming content from its devices, which is up 63% year over year.

Apple's inability to outpace Roku's and Amazon's streaming-device market share means that it needs to look to new opportunities to get its platform's content in front of viewers. Apple likely won't kill off Apple TV anytime soon, but investors can expect it to bring its iTunes services to TVs made by other companies besides Samsung.

Takeaway 2: It's another clear indicator that Apple sees itself as a services company

There's no question that Apple is increasingly focused on its service opportunities, as sales of the iPhone -- the company's most significant revenue driver -- have stagnated. To offset this, the company is looking to services.

CEO Tim Cook has said that his company will double its services sales from 2016 to 2020. Aside from its current services (Apple Music, AppleCare, the App Store, etc.), the company is rumored to be launching a new television streaming service sometime this year. It has already spent at least $1 billion snatching up video content and creating original programming, and has hired media executives for the project.

With just 15% of the streaming device market, Apple likely doesn't want the success of its forthcoming streaming content service to be dependent on its Apple TV device. By bringing iTunes to Samsung TVs, Apple is opening up the possibility of selling its rumored content service on non-Apple devices. That's a very un-Apple move, but it could become more typical for the company as it diversifies its revenue away from the iPhone.

This won't be easy

If Apple does launch a content streaming service soon, it's not going to win in the market simply because the service works on Samsung TVs. It's likely the Samsung partnership is just an initial test toward adding the iTunes service on another company's device. Apple will likely have to work with more companies, and possibly even Roku, when its streaming service launches.

Investors should keep in mind that Apple is playing catch-up in this space. Amazon's Prime Video service is already wildly popular; Roku just added the ability for users to buy premium subscriptions on its platform; and Netflix, of course, dominates video streaming. To succeed in this space, Apple will have to bring its service to as many devices as possible and give up some control over how users sign up for the service.

For a company that's used to controlling every aspect of a user's experience, that transition won't be easy. But if Apple is serious about growing its revenue from a potential content streaming service, it'll be a necessary transition.