It's been an exciting couple of months to own gaming stocks -- and by "exciting," I mean "nerve-wracking." Shares of Activision Blizzard (NASDAQ:ATVI) have lost more than 40% of their value since mid-October. Electronic Arts (NASDAQ:EA) is down nearly 20%, and Take-Two Interactive (NASDAQ:TTWO), owner of such franchises as Grand Theft Auto and Red Dead Redemption, is off a little more than 20%.

Analyst ratings moves have contributed to the volatility. Last month, for example, Bloomberg ran a story quoting analysts worrying over the "economy" of game makers depending on in-game purchases to drive revenue from their games, highlighting the "painfully slow" "earn rate" and "too high" prices within Take-Two's Red Dead Redemption 2 as frustrating for gamers. Shares of both Take-Two and Activision fell on that report, only to see Activision rise right back up again after analyst firm Gabelli urged investors to buy on the shares' weakness...citing the very same "digital revenue shift" as one of the things it liked in the stock!

This month (this year), we've seen further volatility after Activision announced it was selling the rights to its Destiny franchise back to the game's developer, Bungie, sparking a whole series of cuts to Activision's projected revenue and profits. 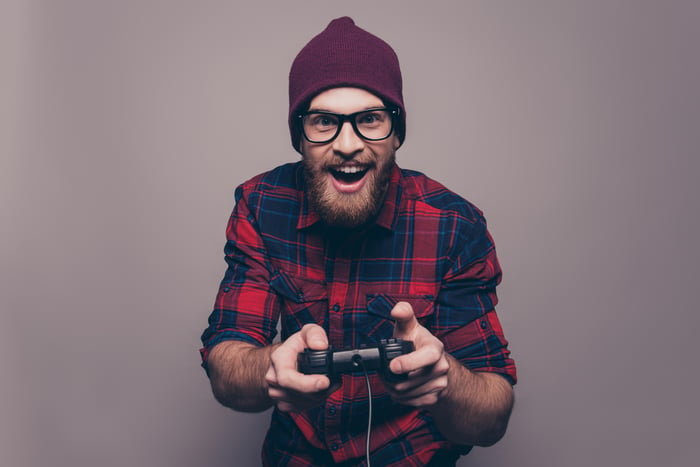 And this week? Once again we're seeing an analyst firm illuminating investment opportunities in gaming, and once again it's Gabelli sounding the charge. In a ratings announcement this morning, Gabelli is adding Take-Two Interactive stock to its buy list. In a note covered on StreetInsider.com (subscription required), "Grand Theft Auto, Red Dead, [and] 2K Sports" are all franchises that make the analyst feel "positive" about Take-Two.

In addition -- and in an echo of one of the arguments it cited in favor of Activision last month -- the analyst likes Take-Two's position in "eSports." Adding a further twist to the story, Gabelli appears to be getting interested in the potential for mergers and acquisitions within this space now that so many gaming companies have gotten so much cheaper.

Could Take-Two get taken out?

Down 21% in three months, and trading now at just pennies above $105 a share, Gabelli argues that Take-Two is starting have "potential as a top take out candidate" -- in other words, somebody might try to buy it. But is that realistic?

On the one hand, Gabelli is certainly correct that among the three publicly traded gaming companies, Take-Two is the closest to being sufficiently bite-sized to become a target for acquisition. At a market capitalization just over $12 billion, Take-Two Interactive stock is less than half the size of Electronic Arts ($26.8 billion) and barely one-third the size of Activision ($35.7 billion) -- although presumably, acquisitions among privately held players in gaming, such as the aforementioned Bungie, could be effected at even lower prices. (Adding to Take-Two's attractiveness is the fact that, with $1 billion cash in the bank and no debt, the company's enterprise value is even cheaper -- just $11 billion.)

However, even Take-Two isn't exactly cheap when its valuation is compared to the profits it's earning. The company's P/E ratio of 58 is only a smidge cheaper than much larger Activision, which sells for a price-to-earnings ratio of 62. More importantly, though, of the three big gaming companies, Take-Two is the only one not currently generating positive free cash flow from its business. Despite reporting more than $213 million in "net income" over the past 12 months, Take-Two's actual cash profits are negative $2.4 million -- versus positive free cash flow of $1.3 billion for Electronic Arts and $1.8 billion for Activision (according to data provided by S&P Global Market Intelligence).

Viewed from the perspective of free cash flow, I have to say I don't have a lot of confidence in Gabelli's argument that Take-Two stock is attractive as a take-out target -- or even stand-alone -- much less in the firm's suggestion that Take-Two stock is worth even more than what it costs today, and likely to rise in value. (Gabelli's price target is $136 a share.)

Given my druthers, I think I'd find Take-Two rival Electronic Arts, selling for less than 29 times earnings and just 18 times free cash flow, much more attractively valued than Take-Two.