Defense stocks are off to a very strong start this year. Here are three that investors should be watching right now.

So far, 2019 has been an excellent year for defense stocks. Since January 1, many stocks in the sector have already delivered double-digit gains, and if we go back another week to the market bottom on Christmas Eve 2018, a handful have already gained 20% -- or close to it -- in returns.

Three defense stocks that investors should continue to watch as we move into 2019 are AeroVironment (AVAV -4.59%), Lockheed Martin (LMT -0.43%), and BAE Systems PLC ADR (BAES.Y 0.17%). Keep reading to learn why three top Motley Fool contributors identified these defense stocks as being worthy of your watchlist right now. 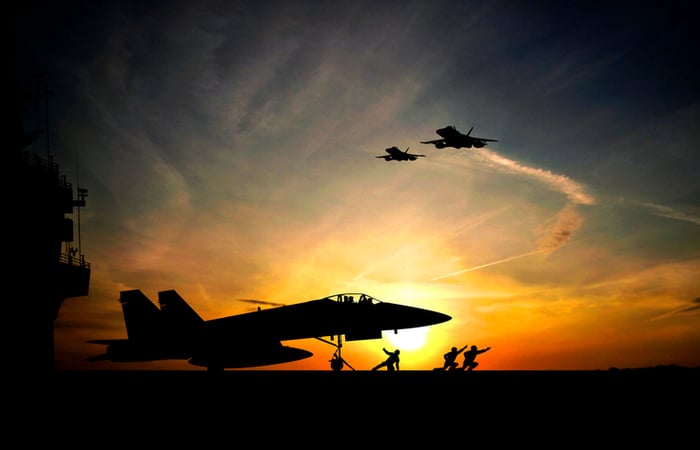 The everything drone company

Travis Hoium (AeroVironment): Drones have long been an ideal military tool, whether they're flying overhead to gather information or replacing boots on the ground in combat zones. Over the past decade, militaries around the world have been spending billions of dollars each year on advancing their drone capabilities and AeroVironment has been one of the biggest beneficiaries, which is why it's a stock investors should keep their eye on.

In fiscal 2019, the company expects to boost revenue by 12% to 15%, to between $300 million and $310 million, with earnings of $1.30 to $1.50 per share. This would continue growth that began two years ago as military and commercial drones became more popular. 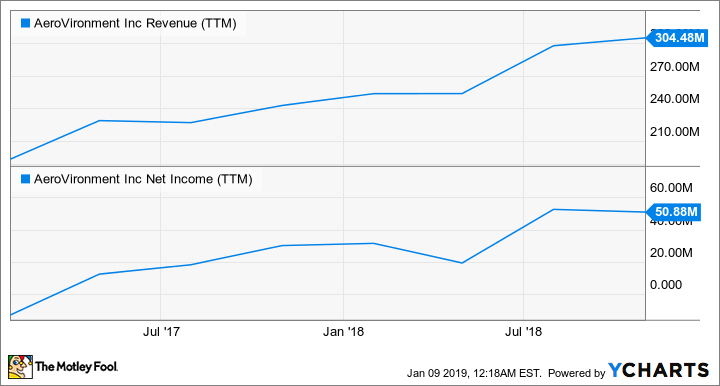 In 2018, AeroVironment became a more focused company after selling its electric-vehicle charging business and turning its focus solely to drones. It's also expanding the drone capabilities it's bringing to market. For example, a recent partnership with General Dynamics will develop drones with tactical missile systems that will integrate with armored combat vehicles.

Commercial drone applications are also starting to open up. The Quantix drone was used in Southern California to support the National Park Service in recovery efforts after recent fires. This is on top of current uses in energy, agriculture, and security applications.

If all goes well for AeroVironment, it could be a disruptive force in military and commercial drones, giving investors an incredible upside.

Cheaper, but for good reason

Matt DiLallo (Lockheed Martin): Defense stocks have been under intense pressure over the last couple of months due to an increasingly uncertain environment. That's evident when you take a look at the performance of the SPDR Aerospace & Defense ETF, an exchange-traded fund that holds more than 30 defense stocks, which has tumbled 19% over the past three months. Several factors have weighed on defense stocks, including Democrats wresting control of the House of Representatives from defense-minded Republicans, which could squeeze the U.S. defense budget, cutting into the profit margins of defense contractors.

One of the harder-hit defense stocks has been Lockheed Martin, which has tumbled nearly 24% over the past three months. That sell-off comes even though the defense contractor expects strong growth in the coming months. Overall, Lockheed estimates that its revenue will expand by 5% to 6% during 2019 while generating about $7 billion in cash from operations, nearly double 2018's anticipated total. That will give the company the money to continue paying its dividend -- which currently yields 3.3% -- while buying back $1 billion of its stock and repaying $900 million in maturing debt.

The concern, however, lies beyond 2019. For starters, the company recently lost out to rival Boeing on several high-profile contract awards that could have driven longer-term growth. Meanwhile, there's uncertainty surrounding the size of the U.S. defense budget for 2020, which could decline due to changes in Congress and other political maneuverings.

That uncertainty is why investors might want to put this defense stock on their watchlist and wait until there's more clarity on prospects beyond this year.

Still a deal, so let's go for four

Jason Hall (BAE Systems): This marks the fourth time I've pitched this British conglomerate as a top defense stock to watch, having offered it up in September, October, and then again in November. BAE Systems' share price is down 18% since that first recommendation, riding a big stock market sell-off to end 2018. However, the company's business results and its prospects have remained essentially unchanged over that period.

Considering that I thought BAE Systems was a pretty solid value when its stock price was almost 20% higher, I think it's an even better deal today. Furthermore, there's some evidence that other investors have also changed their view. Since bottoming out on Christmas Eve, BAE shares have gained nearly 20%. Yet they still represent one of the better values in the defense space: 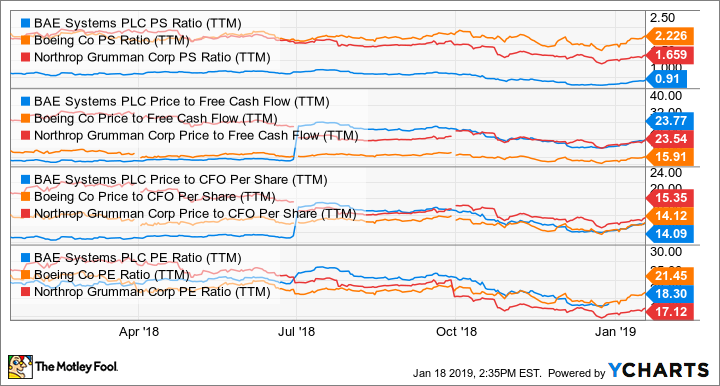 If management's ongoing efforts to improve its margins and returns yield even small gains, they should pay off with big improvements to BAE Systems' profits, making the current stock price a real bargain. BAE Systems should be on investors' watchlists, and maybe even their portfolios.