The move could help the company boost wearable tech sales in the wake of declining iPhone growth.

Reports surfaced last week that Apple (AAPL 2.45%) is in talks to sell the Apple Watch to private Medicare companies. The deals, which haven't yet been secured, would subsidize the price of the Apple Watch for seniors, according to CNBC.

Seniors are a prime market for Apple Watches, particularly with the latest sensors incorporated into the devices. The new Apple Watch Series 4 has an electrocardiogram sensor, which can detect an irregular heartbeat, known as atrial fibrillation, and it also has a new feature that can detect falls, and call for help. 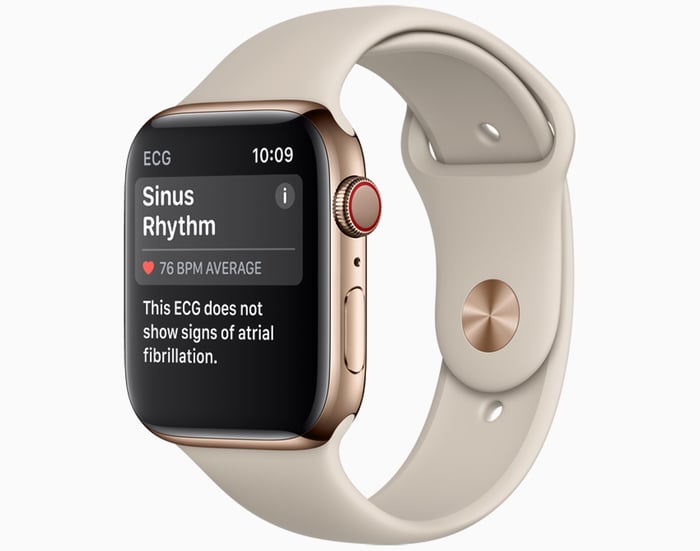 Medicare companies receive government payouts for providing health plans to seniors. These payouts gives insurers the flexibility to offer discounts on health devices that could make their patients healthier. Healthier patients, in turn, lower costs for insurance companies becuase they make fewer trips to the hospital or doctor and require less expensive treatment when they do get medical care. With nearly 20 million seniors enrolled in Medicare Advantage plans, Apple stands to benefit big time by putting together deals to further tap into the senior market.

Looking for a new growth market

The potential deals with Medicare companies isn't out of nowhere for Apple, which struck deals last year with two insurance companies to offer Apple Watches to qualifying customers. Those deals are part of Apple's push to make its Watch a leading healthcare device.

Apple CEO Tim Cook has been vocal about how important the device can be, saying in 2016:

I love the Watch. One day, this is my prediction, we will look back, and we will wonder: how can I ever have gone without the Watch? Because the holy grail of the Watch is being able to monitor more and more of what's going on in the body.

Marketing the Apple Watch as a healthcare device is a move that comes as Apple looks to expand its wearable tech sales to replace slowing iPhone business. Apple released a statement earlier this month that said the company will miss the low end of its first-quarter revenue guidance because of lower-than-expected iPhone sales in China.

Unfortunately, Apple was dealing with slowing iPhone sales before the latest announcement, and it's widely believed that the company needs to look toward its services segment and wearable technology to spur new revenue growth.

Selling more Apple Watches to healthcare providers will help Apple tap the U.S. wearable tech device market, which could be worth $14 billion by 2024. Apple is already benefiting from the overall wearable tech market, which is set to be worth $51.5 billion in three years, and grabbing a bigger piece of the healthcare devices industry would add more growth.

Wearables may be where it's at

Aside from the company's important services segment, wearables are shaping up to become a more significant part of the company's business. With iPhone sales floundering, Apple could increase revenue by boosting Watch sales. The company's wearables segment, which includes Beats headphones and AirPod earbuds, is Apple's fastest-growing revenue segment.

If Apple secures deals to sell its devices to Medicare providers, it'll be some of the first steps towards larger wearable technology goals. It might take some time for wearables to offset slowing iPhone sales, but at this point, the company can't afford not to pursue every new opportunity for existing products.