Unmanned aerial vehicles (UAVs) -- "drones" in common parlance -- appear to be on Wall Street's mind this week, as a second upgrade for a small drone maker rolls out Friday. Following on the heels of AeroVironment's recent buy rating, today we find banker R.W. Baird upgrading FLIR Systems (NASDAQ:FLIR) to outperform and assigning this $47 stock a $56 price target. 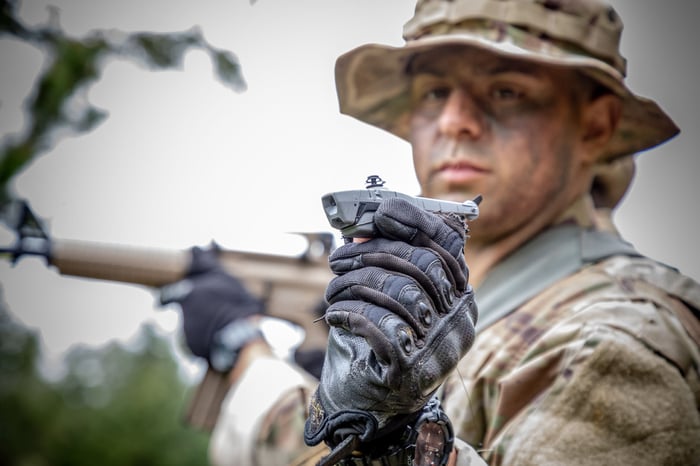 A new player in drones

Baird's FLIR upgrade today begins with the basics: An "attractive" stock price. From early September through late January, FLIR shares have suffered a 26% decline in price, and as described by StreetInsider.com (subscription required), Baird highlights this "recent decline" as a big point in favor of buying FLIR stock.

Granted, FLIR's cheapness may not be obvious to all lookers. Even after losing more than a quarter of its market cap, FLIR still has a hefty $6.5 billion in market cap. Compared to its less than $134 million in trailing net income, this leaves FLIR shares still valued at roughly 48.5 times earnings -- quite a pretty penny for a company pegged by most analysts for only 8% long-term earnings growth, per S&P Global Market Intelligence.

There are two big caveats to that argument, though, that you need to bear in mind.

The first is the (huge) difference between the net income that FLIR reports and the actual cash profits -- the free cash flow -- that the company is throwing off.

Over the last 12 months, FLIR has reported earning just $133.6 million in net income, which is less money than the company was earning five years ago. Free cash flow, however, is doing quite a bit better. When valued on the nearly $344 million in FCF that FLIR generated during the same period, it turns out that shares are valued at just 18.3 times free cash flow, barely a third of the stock's apparent P/E.

Why FLIR is going to grow faster than Wall Street thinks

But this, as it turns out, is the real key to R.W. Baird's FLIR upgrade: The analyst thinks FLIR has quite a bit more growth ahead of it than most folks on Wall Street do.

Perhaps most importantly, FLIR's new Black Hornet nano UAV, announced just last October, has already won an $89 million order from the French Defense Procurement Agency. Yesterday, the company received a further $39.6 million Black Hornet order from the U.S. Army -- that's nearly $130 million in new revenue from a product that didn't even exist until a few months ago, and a strong argument in favor of Baird being right about the "good visibility" that FLIR's revenue is getting.

The Center for the Study of the Drone at Bard College recently published a report describing how U.S. spending on military drones will increase 20% in 2019, and grow at nearly 15% annually over the next five years. By introducing a new product into this rapidly growing marketplace, FLIR Systems has a good chance of capitalizing on this growth -- indeed, already is capitalizing on it -- and thus growing its profits at a greater rate than the 8% annualized that Wall Street is still projecting for it.

At 18 times free cash flow, I can't say that FLIR stock is cheap just yet. But it's making the right moves to become so. The faster FLIR ramps up its drones business, the sooner I'll be able to join Baird and recommend it.