Long-struggling Triumph Group (NYSE:TGI) got a big boost to its effort to streamline when Bombardier (OTC:BDRBF) agreed to buy a wing program that had been eating into free cash flow. There's still considerable work to be done, but investors have reason to hope that after more than two years of restructuring, the company has finally reached a turning point.

Wall Street celebrated the deal, sending Triumph shares up 25% on Jan. 24 following the news. But even after that burst, the shares are still down 41% over the past 12 months and have lost 77% of their value over the last five years. The stock, even after the pop, is arguably still cheap. That doesn't mean it is a good buy. 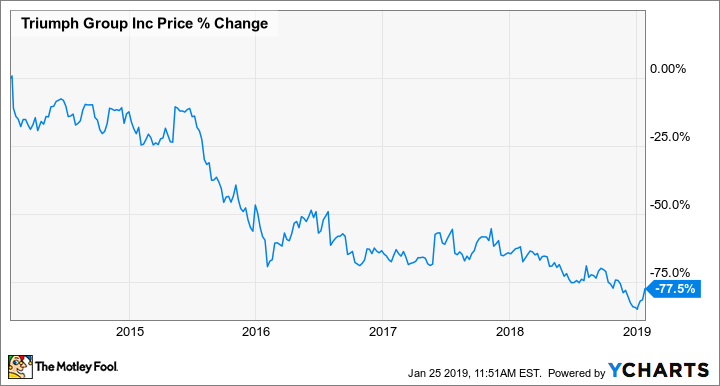 Triumph is selling the unit that manufactures wings for Bombardier's Global 7500 business jet for "nominal cash consideration." Bombardier, which itself is trying to restructure a struggling aerospace division, is counting on the 7500 to provide a spark to its product lineup, but the jet has been delayed in part due to issues with its wing design. 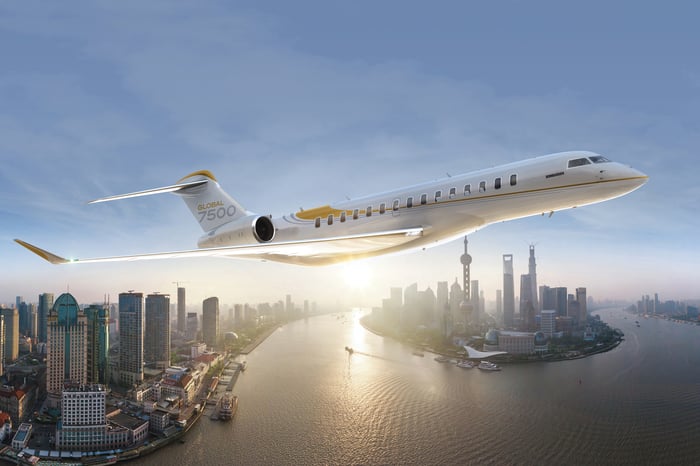 The two companies in 2017 settled a dispute related to the design and manufacturing of wing components.

Triumph CEO Daniel J. Crowley was appointed in January 2016 with a mandate to simplify a formerly acquisitive company that had grown to house 47 different operating entities spread across 72 locations worldwide. Under his leadership, Triumph has merged operating units and dumped a number of money-losing programs, including its Gulfstream wing work, and won back business from the likes of Northrop Grumman, which had previously made Triumph ineligible to bid on new work.

But for all the progress, Triumph has continued to struggle to generate strong returns.

While this latest deal will not generate a cash windfall, it does reduce Triumph's exposure to a less-profitable program still fraught with risk, and it should improve free cash flow. The company had previously said that it expected cash flow to be about break-even for the remainder of its current fiscal year (set to end in March), but had warned that the 7500 wing business would be a cash drain in fiscal 2020 due to working capital needs and production ramp-up costs.

Triumph is in effect gaining increased working capital flexibility in fiscal 2020 at the cost of an eventual payoff in fiscal 2021 or later as the 7500 program matures and unit profitability hopefully increases.

Triumph still has some programs on the books that are break-even at best, notably its work on Boeing 747 fuselages. But the 7500 work was unique, and dangerous, because it was among the few bad programs that were in their early days and not nearing sunset. The deal, along with an unrelated transaction Triumph announced at the same time to sell a contract manufacturing unit to NWI Holdings, should help Crowley to transition the Triumph portfolio toward areas that should generate better returns.

Crowley has done yeoman's work bringing order to what had been a sprawling portfolio, and with the Bombardier deal has hopefully brought an end to the free fall in Triumph shares. The company has been its own worst enemy in recent quarters, repeatedly failing to meet already revised expectations due to continued issues in programs like the 7500. With those projects now largely eliminated, hopefully so too are the surprise estimate cuts.

Actually growing the business, of course, is an entirely different challenge. And doing so in time to capitalize on the current up cycle in commercial aircraft orders is a tough ask.

Triumph, trading at just 9.8 times forward earnings estimates, is far cheaper than industry leader TransDigm Group's forward earnings multiple of 21. But even if the downside is limited, the upside is still far from certain. For my money, TransDigm -- or even the similarly valued Spirit AeroSystems, which has also struggled but is further along in its turnaround -- is a better buy.

Crowley and his team deserve high marks for bringing Triumph back from near death. That said, investors would be wise to watch the next chapter from the sidelines.