There's more than one way to make money as a telecom company, and although they're both in the same industry, Frontier Communications (FTR) and Sprint (S) have very different approaches to their business models. Sprint has been working hard to try to grow its wireless network business, and it's pursued a merger with T-Mobile US in order to bolster its position within the fast-growing U.S. market. By contrast, Frontier has tried to capitalize on assets that wireless specialists have largely spurned, including traditional landline phone service.

Investors looking at telecom want companies with the best growth prospects as well as attractive share prices. In our search for answers, let's look at Frontier and Sprint to pick the one that currently looks like a better buy. 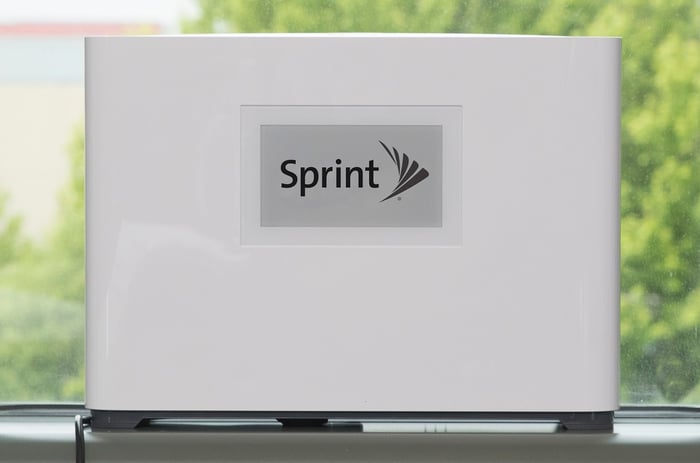 When it comes to recent stock price performance, Sprint is the clear winner over Frontier. The wireless network has posted an 18% rise in its share price over the past year, while Frontier has seen an almost 75% plunge since January 2019.

It's difficult to compare Sprint and Frontier using traditional earnings metrics, because both companies have had to deal with massive extraordinary items that have affected their financial results. Sprint reports a trailing earnings multiple of just three, but that's artificially inflated by tax-related gains that won't recur in the future. Sprint's forward multiple based on near-term earnings projections skyrockets above 100, making it nearly meaningless. Meanwhile, Frontier has consistently lost money in recent years and looks poised to continue to do so indefinitely.

Based on those factors, Sprint looks like the winner. Value investors like stocks that have fallen a lot, but as we'll see in greater detail below, Frontier's declines look justified in light of its business performance.

Telecom investors like dividends, and so it's somewhat surprising to see two stocks in the sector that don't make payments to their shareholders. Yet neither Frontier nor Sprint currently pays a dividend, and that leads to a dead heat between them for income investors.

For a long time, Frontier was one of the highest-yielding stocks in the telecom space. Despite reporting modest earnings, Frontier's cash flow was much higher, allowing it to make lucrative payouts that at times created a dividend yield exceeding 10%. But early last year, Frontier finally decided to suspended its dividend in order to free up cash for other uses, such as paying down debt and spending to expand services.

Sprint hasn't paid a dividend for more than a decade, as the cash demands of building, maintaining, and expanding a wireless network are extensive. Income investors shouldn't expect a payout anytime soon -- even if the merger goes through, T-Mobile doesn't pay a dividend, either. All in all, for investors who care about dividends, these two stocks shouldn't be the ones they look at very closely.

Sprint and Frontier appear to be moving in different directions from a growth standpoint as well. Frontier has watched its business steadily shrink, and in its most recent quarterly report, the company said it lost more than $425 million and lost 93,000 customers. Although revenue per user has been on the rise as remaining customers gravitate more toward broadband, it hasn't been enough to keep overall sales from declining. Moreover, with huge debt levels, the threat of rising interest rates is a very real drag on future prospects. With no change in sight for Frontier's fundamental business prospects, many investors appear to be giving up on the company.

Meanwhile, Sprint is entirely committed to making a merger with T-Mobile work. Without it, Sprint is pretty much convinced that it won't be able to compete as a stand-alone company, admitting as much in regulatory filings to try to gain Federal Communications Commission approval for the deal. Even though it's done its best to try to cut costs and attract subscribers, Sprint has lagged behind T-Mobile and its other rivals, and that's put it in a very difficult situation. Moreover, Sprint has a lot of debt as well, and combining with T-Mobile could prove to be the only viable strategy for eventually getting it paid down.

Is there a winner?

If you had to buy one of these two stocks, then Sprint would be the smarter choice. Yet given that doing so runs the risk of the T-Mobile deal falling through, most investors should think twice before buying either stock. With no dividends and big challenges ahead in the telecom space, finding another play in it could be the best move you could make.