Ford Motor Company (NYSE:F) said last week that it lost $116 million in the fourth quarter of 2018, despite good sales of high-profit trucks and SUVs in North America.

Ford said that problems in its overseas regions were part of the story, that it's working to fix those problems, and that investors should expect improvements in time. But there was more to the story, including a hefty pension-related charge and some other factors, and it's worth taking some time to understand exactly what happened.

Fortunately, Ford gave us some help in that effort. This chart from Ford's fourth-quarter earnings presentation shows how different parts of the company performed in the quarter, and how those performances stack up against their year-ago results. 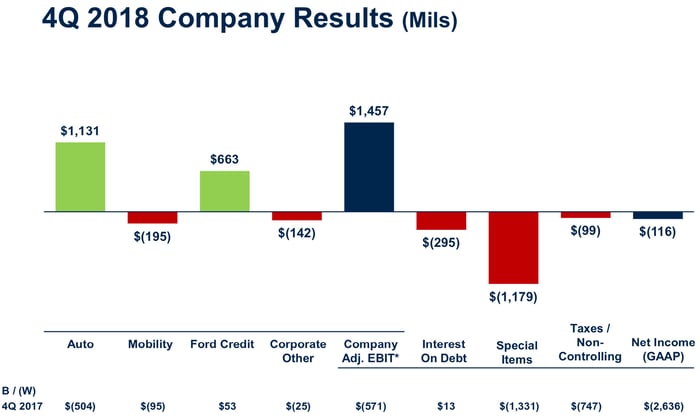 If we look at the last item on the right, at the bottom of the chart, we see that Ford's result was a net $2.636 billion decline in net income from a year ago, when it posted net income of about $2.5 billion. Below, we'll take a more detailed look at how each of the items shown on the chart contributed to that decline. 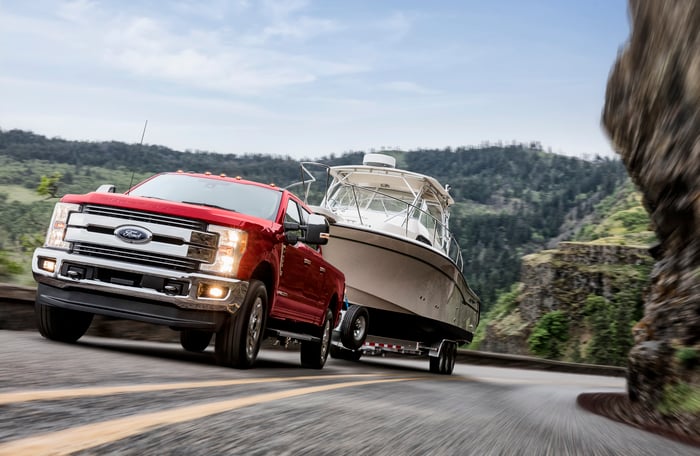 Sales of Ford's highest-profit trucks boomed in the fourth quarter, but its net income swooned. What happened? The answer is a little complicated. Image source: Ford Motor Company.

Ford's automotive earnings before interest and tax (EBIT) -- its profit from building and selling vehicles -- fell by $504 million in the fourth quarter from a year ago, to just over $1.1 billion. 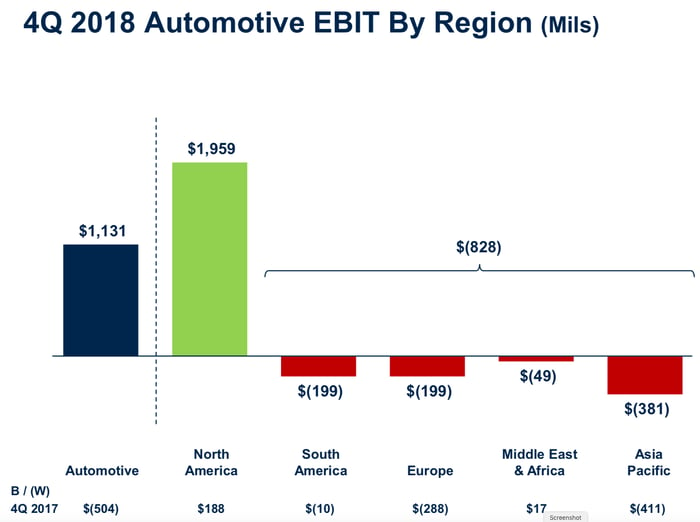 Ford's pricing improved year over year, as did the "mix" of vehicles it sold, particularly in the U.S. and Europe. In fact, its EBIT in North America was $188 million higher than in the year-ago period.

But those improvements weren't enough to offset the negatives: a big drop in income from Ford's joint ventures in China, where Ford sales were down sharply; $439 million in higher commodity costs, thanks in part to the Trump administration's tariffs on aluminum and steel; and $745 million in costs related to recalls.

This category includes Ford's autonomous-vehicle effort and its Ford Smart Mobility initiatives. Right now, those are both investments -- neither is expected to turn a profit for at least a couple of years -- and Ford has been ramping up its spending in both areas. That's why mobility's EBIT loss increased by $95 million from a year ago.

Ford Credit's pre-tax profit was $663 million, a $53 million improvement from a (terrific) year-ago result. Ford's captive-financing arm has been performing very well lately, generating much of the cash necessary to fund Ford's quarterly dividend. Ford said the year-over-year improvement in the fourth quarter was largely due to "favorable lease residual performance."

Translation: Ford Credit has been getting strong prices at used-car auctions for the vehicles it takes back when leases end.

This is a catchall cost center, so it won't generally post a profit. Its loss increased by $25 million from a year ago, which Ford attributed to fluctuations in the market value of securities held by the company.

Ford paid a bit less interest ($13 million) on its debt in the fourth quarter versus the year-ago period.

Ford took three one-time charges in the fourth quarter, one of which was very large: $877 million. That one requires some explanation.

At the end of every calendar year, Ford remeasures the value of its pension and OPEB ("other post-employee benefits") portfolios, the big investment portfolios that it maintains to fund benefits to its retirees. The difference between the values of those portfolios and Ford's expected obligations to its retirees are reflected as liabilities on Ford's balance sheet. The overall year-to-year change in the portfolios' value (or, put another way, in Ford's unfunded liabilities) is expressed as a special item in the company's fourth-quarter earnings report.

That special item can be a credit, if the combined value of the portfolios rose year to year, or a charge, if the value fell. Sometimes those charges are huge: At the end of 2016, Ford took a charge of $3 billion after a drop in the discount rate boosted its liabilities -- a charge that left Ford with an on-paper net loss despite strong underlying results.

Ford fared better in 2017, taking a charge of just $162 million. But in 2018, the markets' December swoon forced Ford to take that $877 million charge, wiping out its remaining profit for the quarter.

The other two charges were less consequential: $262 million related to "separations," Ford's term for layoffs, in North America, South America, and Europe, and $40 million for the costs of shutting down Ford's Chariot shuttle-bus service.

Ford got an accounting windfall in the fourth quarter of 2017 thanks to favorable changes to the U.S. tax code. Needless to say, that didn't repeat: While Ford's net tax bill was fairly modest at $99 million, that represented a decline of $747 million from a year ago.

The upshot: The pension charge was most, but not all, of the story

It's easy to say that Ford's fourth-quarter loss was the result of the pension and OPEB remeasurements -- which in turn were the result of Mr. Market's December swoon. That's not wrong, but as we've seen, it's also not the full story.

Higher costs, a China sales slump, pressures in Europe, and the non-repeat of a big 2017 tax windfall were also important contributors Ford's big year-over-year decline in net income. Obviously, Ford can't do much about some of those things. But now that we know what went awry in 2018, we know what to watch for in Ford's upcoming results as 2019 unfolds.