Shares of Honda (NYSE:HMC) began 2019 by roaring off the line. According to data from S&P Global Market Intelligence, Honda's shares rose 13.69% in January, handily outpacing the S&P 500 Index's 7.87% gain. 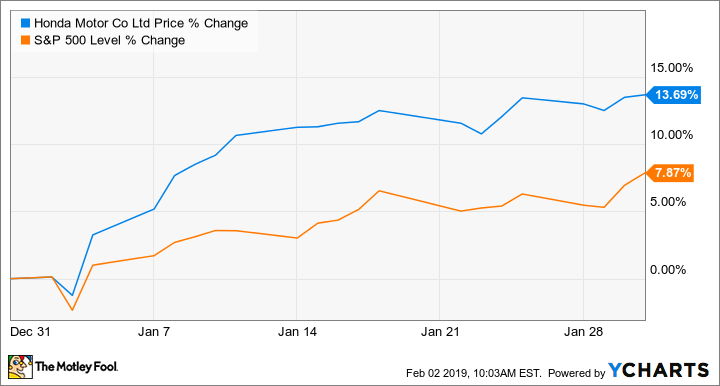 Some of that gain was simply a recovery from the marketwide sell-off in December, when Honda's share price dropped about 8%. But some of it was due to fundamentals, including upbeat expectations for an all-new Honda set to arrive at U.S. dealers in February.

First, Honda ended 2018 on a strong note in the United States, its most important market. Honda's U.S. sales rose 3.9% in December, led by big demand for its highly regarded CR-V compact crossover. Honda sold a whopping 42,079 CR-Vs in the U.S. in December, up almost 14% from a very good year-ago result -- and an all-time monthly record for the model.

That result reassured investors that despite the stock market slump, Honda was still finding plenty of buyers as 2019 began. 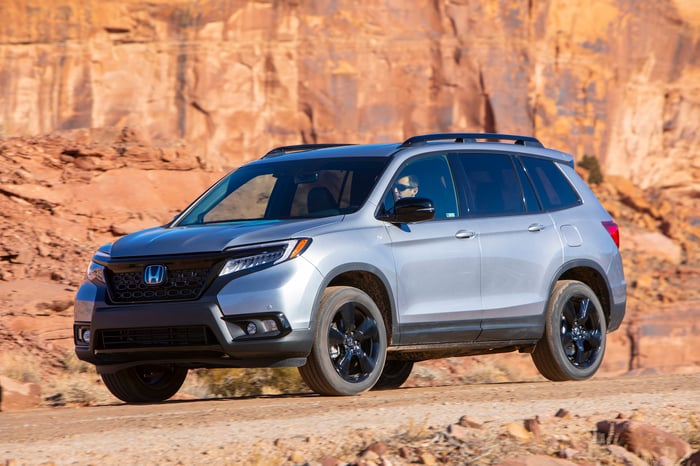 Honda will look to the all-new midsize Passport crossover to give its sales and margins a boost in 2019. The Passport will go on sale in the U.S. on Monday, Feb. 4. Image source: Honda.

Second, Honda has an all-new model coming, the Passport. The all-new Passport is a "two-row" (five-passenger) midsize crossover SUV, sized to slot in between the CR-V and its larger sibling, the "three-row" (seven-passenger) Pilot. While Honda first unveiled the Passport in November, it used the North American International Auto Show in January to remind investors that the new SUV will go on sale very soon -- on Feb. 4.

The two events gave investors some optimism heading into Honda's earnings report on Friday, Feb. 1. But Honda's earnings for the quarter that ended on Dec. 31 were disappointing: Honda's operating profit fell 40% from the year-ago period on recall-related costs and rising incentives, and its stock ended the day down 3.1%.

Despite the disappointing earnings report, Honda slightly boosted its guidance for the fiscal year that will end on March 31. Between now and then, Honda will look to the Passport -- and to continued strong demand for the CR-V -- to boost its sales and margins in the U.S., while aiming to keep its incentive spending under control.