After several tough quarters, Ford investors can finally see a path to improvements.

To some extent, Ford's January rise can be explained as a partial rebound after a big sell-off in December. But while Ford's share price is still quite low, there's a growing sense among investors that CEO Jim Hackett may finally have the company headed in the right direction. 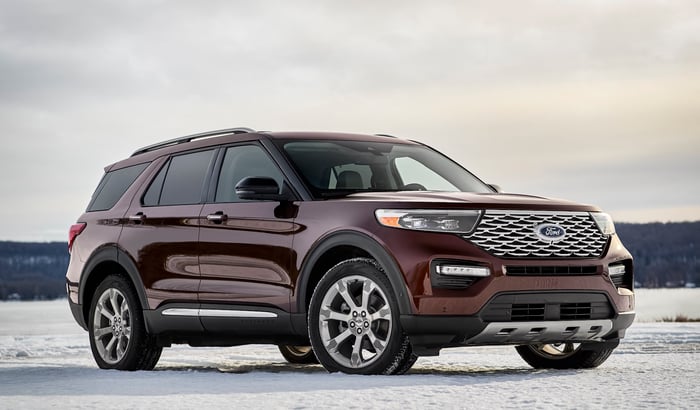 The all-new Explorer is one of several new Fords set to arrive in 2019. Image source: Ford.

One of the things we learned in January was that Ford's 2018 earnings were dismal. External factors such as exchange rates and higher steel prices were part of the problem, but Ford's own woes in China and Europe were also partly to blame.

Happily for Ford shareholders, another thing we learned during Ford's guidance presentation and earnings call in January is that Ford's leaders think the worst is behind them. Ford spent 2018 laying the groundwork for a major overhaul of its business in China, and putting together a plan to return Europe to sustainable profitability.

Now, in 2019, Ford will begin executing on those plans, while continuing with its effort to boost profitability in North America and beginning work on a revamp of its business in South America. Ford will also launch several new products this year, including all-new versions of the big-selling Explorer and Escape, that are expected to boost its transaction prices and margins.

Simply put, after a year of struggles, Ford investors now have a good idea of where the company is headed -- and there's a lot to like about the plan.

CFO Bob Shanks made it clear that some of those external headwinds, like Brexit, will still be a factor in 2019. That's why Ford's guidance for the year is deliberately vague: Ford can't yet say how much improvement it'll see by the end of 2019, but it's now confident that things are on the right track.