Please ensure Javascript is enabled for purposes of website accessibility
Log In Help Join The Motley Fool
Free Article Join Over 1 Million Premium Members And Get More In-Depth Stock Guidance and Research
By Keith Speights – Updated Apr 10, 2019 at 11:58AM

Analysts think you ain't seen nothin' yet for these top Canadian marijuana stocks.

Big Canadian marijuana stocks are hot. But are they too hot? Not according to Wall Street.

The biggest of them all, Canopy Growth (CGC), has enjoyed a great ride so far in 2018, with shares soaring nearly 80%. Aurora Cannabis (ACB -0.80%) and Tilray (TLRY) have been neck-and-neck for the No. 2 spot in terms of market cap. Aurora is up close to 40% year to date, while Tilray's share price is up around 10%.

But analysts surveyed by The Wall Street Journal think all three of these top marijuana stocks can deliver even greater gains over the next 12 months. In fact, analysts project that Aurora Cannabis, Canopy Growth, and Tilray will rise by at least 40%.

Why is Wall Street so optimistic about these big pot stocks? Three reasons especially stand out. 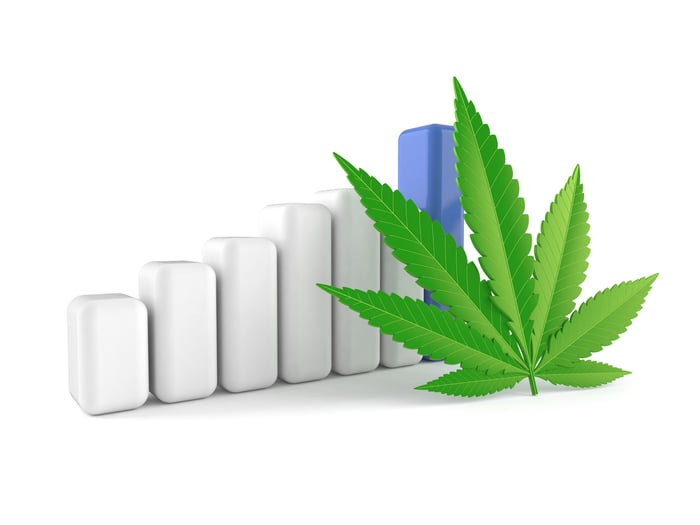 We've only seen a hint at the impact on revenue for major cannabis growers from the opening of the Canadian recreational marijuana market in October 2018. None of the big three Canadian marijuana stocks have officially reported financial results since the launch of the recreational market.

Aurora Cannabis provided a sneak peek at its results for the quarter ending Dec. 31, but its revenue guidance was lower than what analysts expected. Don't let that fool you, though. The Canadian opportunity is a major reason behind Wall Street's bullish take on these stocks.

It's important to remember that the first few weeks and months of the Canadian recreational market were hampered by limited production capacity. Analysts are fully aware, though, that Aurora, Canopy, and Tilray are beefing up their capacity. Any problems on this front are only temporary.

Wall Street also knows there is a potentially massive market that still hasn't opened up in Canada. Regulations for cannabis edibles and concentrates should be finalized later this year.

2. The world is going to pot

Canada is only part of the equation for Wall Street's calculations of the prospects for the big cannabis producers. The global medical marijuana market presents an even greater opportunity.

As of the end of 2018, 32 countries had legalized medical cannabis. These include major economic powers such as Australia, Germany, South Korea, and the United Kingdom. Nine of the countries where medical cannabis is legal claim populations larger than Canada's.

The global medical marijuana market could top $50 billion annually. However, that figure includes the U.S., where marijuana remains illegal at the federal level even as 33 states have allowed the legal use of medical cannabis. Aurora, Canopy, and Tilray can't enter the U.S. marijuana market and retain their listings on major stock exchanges.

But efforts are under way to revise U.S. marijuana laws. With increasing popularity for legalization among American voters and signs that President Trump might sign a bill that would allow states to enforce their own marijuana laws, it's possible that significant progress could be made over the next 12 months that would boost the big Canadian marijuana stocks.

There's already one way the major Canadian cannabis producers could establish U.S. operations without fear of having their stocks delisted. The U.S. recently legalized hemp, which is cannabis that contains low levels of the psychoactive compound THC.

Canopy Growth has already announced that it's expanding into the U.S. hemp market. The company plans to build a Hemp Industrial Park in New York state. Canopy's facility will be able to produce large volumes of hemp extracts. These extracts could be used in cannabinoid-based consumer products and medicines.

So far, neither Aurora Cannabis nor Tilray has said that it will also establish operations in the U.S. hemp market. However, Tilray announced in December that it had signed a binding letter of intent with LiveWell Canada for a deal whereby LiveWell will supply hemp-derived cannabidiol (CBD) to Tilray. The company stated that the hemp CBD will be used in products to be distributed in Canada and the United States.

The opportunity could be enormous. Cannabis market research company Brightfield Group even estimates that U.S. hemp CBD sales could total $22 billion by 2022.

The average one-year price targets set by Wall Street analysts for Aurora Cannabis, Canopy Growth, and Tilray represent premiums of 56%, 44%, and 70%, respectively, over the stocks' current prices. But could Wall Street be overly exuberant? Possibly.

Delays in licensing of new production facilities in Canada could mean lower-than-expected revenue in the country's recreational marijuana market. Although countries around the world have legalized medical marijuana, the development of these markets could be a lengthier process than many hope.

There's no guarantee that the U.S. will relax its marijuana laws in a quick time frame. And the hemp CBD market might not take off as some think it will, either.

Keep in mind also that the share prices for Aurora, Canopy, and Tilray already have tremendous growth expectations baked in. So yes, Wall Street analysts could have their price targets for these three marijuana stocks set too high.

These hot stocks could cool off later in 2019. But the top cannabis producers should have long-term growth prospects that are downright sizzling.