Please ensure Javascript is enabled for purposes of website accessibility
Log In Help Join The Motley Fool
Free Article Join Over 1 Million Premium Members And Get More In-Depth Stock Guidance and Research
By Ashraf Eassa – Updated Apr 24, 2019 at 10:35AM

The display market is unforgiving, and LG Display's position might be vulnerable.

The life of a display-panel maker is a thankless job. Although many of the devices that we all love and enjoy, like our smartphones, PCs, and televisions, all require displays, and even though the user experiences of such devices are directly impacted by the quality of the display, display makers aren't always rewarded with fat profits. And, when those display makers do make significant profits, investors don't seem to value those profits too highly.

Such is the case with LG Display (LPL -5.34%). The company's shares have lost nearly 38% of their value over the last year, and the stock currently trades at about 3.8 times the company's trailing 12-month earnings. The latter is a clear sign that investors are skeptical that LG Display's profits will persist. 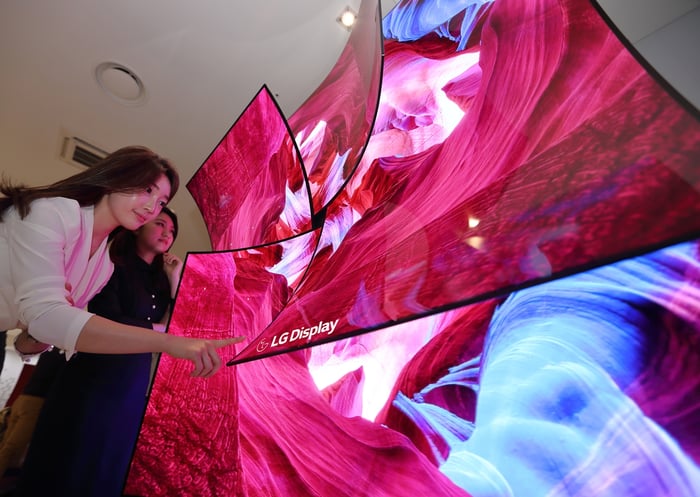 The question that we need to answer, though, is this: Is LG Display stock a buy? Let's dive in.

The display market is a competitive one, and one that seems to get more competitive over time. During the company's most recent earnings call, LG Display investor relations representative Hee Yeon Kim indicated that during the first quarter of 2019, display area shipment growth (that is, the change in the total amount of display area that the company sells) will "fall at a mid- to high-single-digit percentage, reflecting the panel price decline."

Later on the call, Daniel Lee, who heads up the company's market intelligence efforts, said that the company expects that overall supply growth for liquid crystal displays (LCDs) -- a type of display that continues to make up the bulk of the company's business -- will be in the "double digits."

That growth, Lee explained, is "due to [an] increase in Chinese panel makers' investment, as it did in 2018."

That supply growth is bad for LCD average selling prices (and, by extension, LG Display) because the demand for LCDs is generally what it is based on end-market demands; further, supply growth can pressure average selling prices (ultimately reducing revenue and profitability) thanks to the basic laws of supply and demand. Additionally, with additional display makers coming online, any share that those other players gain will be at the expense of incumbent vendors.

To combat this phenomenon, the company is doing a couple of things. First, it's making heavy investments in organic light-emitting diode (OLED) screen production. Fewer companies are able to build OLED-based screens than those that can build LCDs (and high-end smartphones are increasingly adopting OLED screens), so shifting its business mix toward OLED technology can improve profitability.

According to LG Display CFO D.H. Seo, the company forecasts that 30% of its revenue in 2019 will come from OLED screens. By 2021, that figure should get "close to 50%," per the executive.

As far as LCDs go, Seo claimed that the company will be "different from the past" and that LG Display will "improve operational efficiency and focus more on profitable areas."

This makes sense. In a cutthroat market, keeping your manufacturing cost structure as low as possible and investing in areas that require increased differentiation is a good way to maximize profitability.

Should you buy LG Display stock?

The near-term outlook for the company (and, frankly, the whole display industry) looks like it'll be characterized by supply growth and intense competition. Those are clearly negatives for a display maker like LG Display.

While I like that LG Display's leadership clearly recognizes how tough things are in this market and is taking reasonable steps to position the company for improved performance over the long term, it's hard to get too excited about investing in LG Display or, frankly, any of its peers for the long term. There are simply better markets in the world of technology to invest in, so, no, I don't think LG Display is a buy.