By transitioning from up-front to ratable licenses, Tableau looks to expand its footprint at larger organizations. Its recently reported fourth quarter suggests the strategy is working.

The world is expected to generate 50 times as much data in 2020 as it did in 2011, and Tableau Software (DATA) is helping make sense of the flood of new information. Its business intelligence platform helps companies to better see and understand data, making it easier for decision-making managers to more quickly notice trends or for supporting analysts to more quickly notice outliers.

Tableau transitioned its business model in 2018, nudging customers from buying up-front perpetual licenses to buying ratable monthly subscriptions that can be continually updated. The company sacrifices up-front revenue, but it now becomes easier for Tableau to expand its presence in larger enterprises by introducing more flexibility to add users and roles. 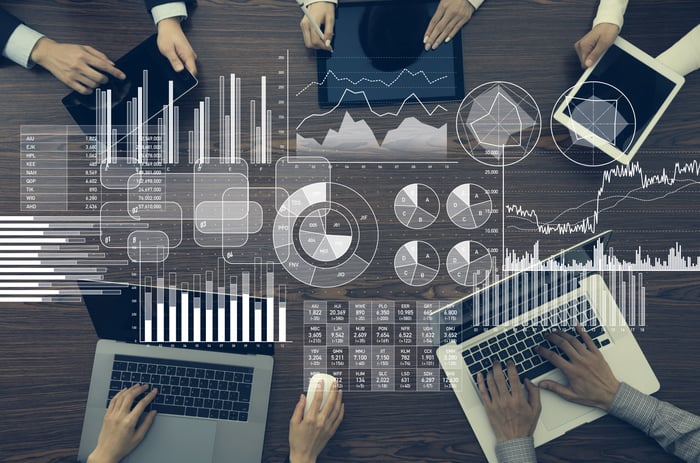 The company just reported its fourth-quarter and full-year earnings. Let's take a closer look at the results.

Data source: Tableau. EPS is on a fully diluted basis. As of Jan. 1, 2018, Tableau revenue is reported and recognized using the new accounting standard ASC 606. Q4 2017 is reported using ASC 605, which may not provide a direct year-over-year comparison.

Before digging in, note that Tableau's financial reporting underwent an accounting change that better aligns with its transition to subscriptions. The company adopted the ASC 606 standard for fiscal 2018, which means quarterly recognized revenue is approximately 22% higher than it would have been using the previous ASC 605 standard.

The year-over-year GAAP results aren't quite comparable because they use two different standards, but to keep things apples-to-apples, I've included a 605-to-605 revenue comparison in the next section.

For the fourth quarter of 2018, Tableau reported the following:

Tableau also reported the following full-year 2018 results, which also use the ASC 606 standard:

CEO Adam Selipsky commented in the conference call about his company's business transition:

Transitioning to [a] licensing model of a software company is no easy task, so it's incredible to see such strong resonance from our customers and to see them embrace subscription licensing so rapidly. In fact, in just two years we've gone from 20% ratable mix to just under 80% at the end of this quarter. As we head into 2019, we look forward to progressing with our transition as quickly as possible.

To do so, we'll be focused on building our capabilities to ensure that customers are successful in deploying, adopting, and managing Tableau, as well as continuing to refine our role-based offerings so customers can tailor Tableau to each and every user in their organization.

Upsell, upsell, upsell. Enterprise software providers can significantly boost both revenue and profitability when existing customers add new users and more features. Tableau's shift to subscriptions is a bit confusing and sacrifices top-line sales in the short term. But it could prove to be an excellent long-term strategy, so long as customers are willing to make the move and stick with them.

CFO Damon Fletcher mentioned that the company's ratable license bookings mix is on schedule to approach 90% by the end of 2019, and that the renewal rate continues to exceed 90%. Those numbers suggest that the business transition is working. If so, investors should expect profit margin to increase in the upcoming fiscal year.