If Aphria (NASDAQ:APHA) selected a theme song for the last few days, it would probably be Ray Charles' classic "Hit the Road, Jack." The Canadian marijuana producer's board of directors firmly rejected the hostile takeover bid by Green Growth Brands (OTC:GGBXF).

Aphria's shares enjoyed a nice run after Green Growth first announced its intent to acquire Aphria in December. But Aphria stock fell after the news of its board's recommendation against the offer. What happens now that Aphria's board essentially told Green Growth Brands to take a hike? 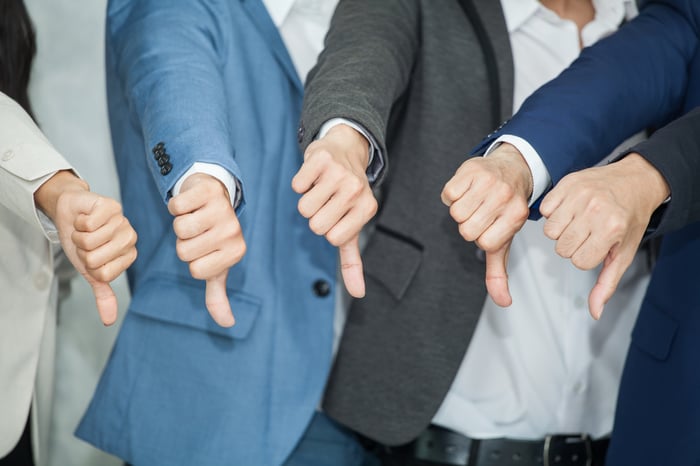 No way, no how

Aphria's board listed several reasons behind its decision to rebuff Green Growth Brands' proposed acquisition. First and foremost, the price wasn't anywhere close to what it needed to be. Actually, Aphria shareholders would have to sell their stock at a significant discount to the current share price. Any board that would have been in favor of that deal would have probably been told to take a hike themselves.

There was also a serious consequence of Green Growth buying Aphria. Green Growth is a U.S.-based cannabis producer. Aphria can't maintain its listings on the Toronto Stock Exchange (TSX) and New York Stock Exchange (NYSE) and conduct operations in the U.S. as long as marijuana remains illegal at the federal level. An acquisition of Aphria by Green Growth would have caused Aphria to be delisted from both exchanges. Green Growth Brands, by the way, trades on the smaller and less prestigious Canadian Securities Exchange in Canada and over the counter in the U.S.

Even if the issues of the ridiculously low offer and delisting threat didn't exist, it was abundantly clear that Aphria's board simply didn't like Green Growth Brands. Aphria Chairman Irwin Simon said that Green Growth is "an illiquid company with limited operating history, minimal assets, and no track record in the cannabis industry."

In addition, Aphria's board expressed its belief that the company's outlook is bright without accepting a substandard offer like the one Green Growth proposed. The board cited Aphria's strong revenue growth, its expansion efforts that will boost annual production capacity to 255,000 kilograms, and its global operations as positive indications of the company's ability to succeed.

There are a couple of loose ends for Aphria's board of directors that aren't directly related to the Green Growth bid. One is for the special committee consisting of independent board members to complete its review of allegations that Aphria significantly overpaid for its acquisition of LATAM Holdings. These allegations were the primary reason why Aphria stock fell so low that Green Growth saw a window of opportunity.

The board is also looking for a new CEO. Vic Neufeld announced in January that he and co-founder Cole Cacciavillani are stepping down from their executive positions at Aphria. Both Neufeld and Cacciavillani, however, will retain their positions on the company's board of directors.

But the main thing for Aphria will be to focus on business as usual. The company hopes to soon secure licensing from Health Canada for its Aphria One expansion and Aphria Diamond retrofit. Checking off that box should really turbocharge Aphria's sales with the significant boost to capacity.

Aphria also looks forward to the potential finalization of regulations for cannabis edibles and concentrates later this year. This should open up another large market for the company.

Don't rule out the possibility of another deal for Aphria. It's obvious that the company itself isn't.

The press release detailing Aphria's board's rejection of the Green Growth Brands bid included a couple of interesting comments. One of the reasons given for giving thumbs-down to the offer was that it didn't account for Aphria's great prospects "either as an independent company or in partnership with a strategic partner." The statement also mentioned that the Green Growth acquisition would "potentially reduce interest from strategic partners."

Aphria just might attract a big partner. Canopy Growth and Cronos Group have already landed big investments from companies outside of the cannabis industry. The addition of independent board members, including Irwin Simon as chairman, plus Neufeld's departure as CEO could give Aphria a fresh slate that makes it more attractive to major beverage companies or tobacco companies.

But for small players like Green Growth Brands seeking to make, in Aphria's board's words, "highly opportunistic" deals timed to "exploit uncertainty" about Aphria, Ray Charles might have said it best: "Don't you come back no more."